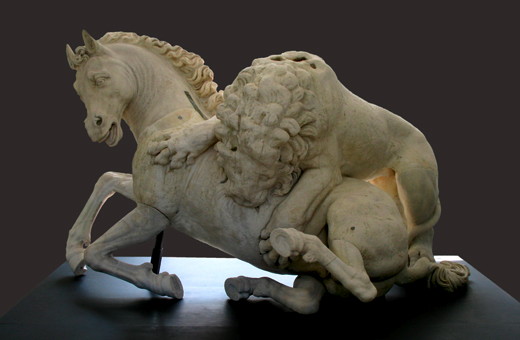 The Capitoline Lion Attacking a Horse – lecture at the Getty Villa

In the earliest days of the Roman Empire, the symbol of Rome’s power was a massive marble lion savaging a horse.  Having traveled outside Rome for the first time in over two millennia, this sublime sculpture is now on view at the Getty Villa.

On December 8, 2012 explore the fascinating history of the Lion Attacking a Horse in a gallery course with curators Claire Lyons and Mary Louise Hart.

The violent yet beautiful sculpture is the centerpiece of a special installation at the Getty Villa until February 4, 2013.   The course will trace its Hellenistic roots through its impact on Michelangelo and Renaissance artists to its function as an icon of civic power.

Beauty and Dominance: The Capitoline Lion Attacking a Horse – LECTURE

At the J. Paul Getty Museum, the Getty Villa

Tickets are available by calling 310-440-7300 or by visiting their official website.

ABOUT THE ANCIENT ARTWORK:

On loan from the Capitoline Museums in Rome, the spectacular Lion Attacking a Horse will be on view at the Getty Villa from August 10, 2012 to February 4, 2013. Presented for the first time outside Rome, where it has not been on public view since 1925, the sculpture will be the centerpiece of a special installation that traces its history from antiquity to the modern era and showcases recent conservation work undertaken in Rome.

Part of “The Dream of Rome,” a project initiated by the Mayor of Rome Giovanni Alemanno to exhibit timeless masterpieces from the city of Rome in the United States, the installation will also include related works from the Getty Museum and Getty Research Institute’s collections.

“We are thrilled to have on view at the Getty Villa the celebrated Lion Attacking a Horse, which is one of the most storied sculptures to have survived from antiquity,” says Claire Lyons, Acting Senior Curator of Antiquities. “As the earliest work of ancient art recorded on the Capitoline Hill, it marks the beginning of the world’s oldest public art museum.”

Depicting the figure of a fallen horse succumbing to the claws and fangs of a ferocious lion, the monumental group dates to the early Hellenistic period (the late 4th century B.C.), when Greek sculptors began to produce naturalistic portrayals of intense emotion and physical exertion. Although the original location of the sculpture is unknown, its massive scale and dramatic carving suggest that it embellished a monument in northern Greece or Asia Minor (present-day Turkey). Created in the era of Alexander the Great’s conquest of Asia, the sculpture may have formed part of a larger composition with a melee of wild beasts and mounted hunters, which commemorated the young king’s famous lion-hunting exploits at Sidon (present-day Lebanon) in 332 B.C. and a royal game preserve in Basista (present-day Uzbekistan) in 328–327 B.C.

The sculpture was eventually brought to Rome, most likely as war booty seized by a victorious general for display in the imperial capital. It was ultimately discovered in the streambed near the Circus Maximus, a stadium used for chariot races, gladiatorial games, and animal combats. The work was first mentioned in an archival document in 1300.

By 1347, the sculpture was prominently displayed on the Capitoline Hill in Rome, the seat of the city’s civic administration. During this time, Renaissance Rome was experiencing a great rebirth of interest in its glorious ancient past, which served as a model for the present. Remains of antiquity, such as Lion Attacking a Horse, were among the earliest expressions of the Renaissance spirit.

The work was initially installed on the staircase of the Palazzo Senatorio in the Piazza del Campidoglio on the Capitoline Hill. Presiding over an area used for pronouncing judicial sentences since antiquity, this powerful image of domination and retribution served as a symbol of Rome for over a century. In 1471 Pope Sixtus IV transferred a group of ancient bronze sculptures, including the famous statue of a she-wolf suckling the twins Romulus and Remus, from the Lateran Palace to the Piazza del Campidoglio, as reminders of “ancient excellence and virtue.” Mounted on the facade of the Palazzo dei Conservatori, the she-wolf replaced the lion-and-horse image as the emblem of Rome. Lion Attacking a Horse was moved to various places on the Capitoline until it was eventually installed in the center of a fountain in the Caffarelli Garden in 1925.

Throughout the late Middle Ages and the early Renaissance, the sculpture was a battered fragment consisted only of an equine torso and feline foreparts. In 1594, Michelangelo’s student Ruggero Bascapé (Italian, active by 1580, died about 1600) replaced the horse’s head and both animals’ missing limbs and tails. His restoration of the horse, with its head straining forward and its lower back leg folded awkwardly beneath its body, was not well received at the time.

Much admired by Michelangelo, who praised the colossal fragment as “most marvelous,” Lion Attacking a Horse was a compelling model for generations of artists who studied in Rome. It features in several 16th-century illustrations which show the work before and after restoration, and became the prototype for numerous small and large scale replicas. The installation at the Getty Villa will include a 1585 engraving by Giovanni Battista de’ Cavalieri from the Getty Research Institute, illustrating the sculpture prior to Bascapé’s additions. A 17th-century bronze statuette by Antonio Susini from the Department of Sculpture and Decorative Arts at the Getty Museum renders the horse’s head turned back toward the lion, a dynamic solution that reflects the likely composition of the original Greek sculpture. Also on view at the Getty Villa, but not part of the special installation, is a Roman mosaic of a lion attacking an onager, a scene that helps viewers visualize the original appearance of the Capitoline sculpture. Lion combats also appear on a set of Parthian silver horse-trappings, demonstrating the popularity of the theme in various media, including vase-painting, coins, and gems.

The ancient sculpture was also the model for the image of a jaguar assaulting a zebra on a French tapestry, The Striped Horse from The Old Indies series, which will go on display at the Getty Center in concert with the Villa installation.

In the spring of 2012, the Capitoline Museums undertook an analysis of the ancient workmanship and historical interventions, repaired breaks, and cleaned the stone. The result of this conservation project will be presented to the public for the first time at the Getty Villa.

Lion Attacking a Horse from the Capitoline Museums, Rome is co-organized by the J. Paul Getty Museum and the Sovraintendenza ai Beni Culturali di Roma Capitale — Musei Capitolini. The special installation at the J. Paul Getty Museum at the Getty Villa was realized with the generous support of the Knights of Columbus and the Getty Museum’s Villa Council. The sculpture will return to Rome after its exhibition at the Getty Villa, where it will be placed on display among other masterpieces of classical sculpture at the Capitoline Museums.

About the Capitoline Museums
Founded in 1471 by Pope Sixtus IV with the donation to the Roman people of the great Lateran bronzes, the Musei Capitolini is the oldest public art museum in the world. It is comprised of two buildings, the Palazzo dei Conservatori and the Palazzo Nuovo, which, together with the Palazzo Senatorio, surround the Piazza del Campidoglio on the Capitoline Hill in Rome.

Additional information is available at www.getty.edu.
Sign up for e-Getty here to receive free monthly highlights of events at the Getty Center and the Getty Villa via e-mail, or visit their site for a complete calendar of public programs.