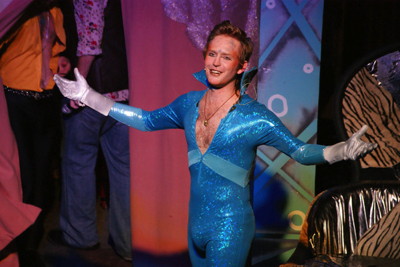 Here are the latest Fringe reviews by Jesse & Pauline:

Zenith Ensemble—winner of last year’s Fringe Festival’s “Best World Premiere” and “Best of the Fest” (Rise)—returns this year with their production of Shel Silverstein’s The Devil and Billy Markham.  Staged in the backroom of The Three Clubs, a space fitting for a tale of man, devil, God and morality (low lit booths, tall wooden stools at a bar intended only for a few, the smell of stale whiskey drenched wood), a scruffy Aaron Lyons begins reciting his one-man, hour-length show while still offstage. It’s unsure if this is the show or simply the announcement to the show… A woman (Ruth Fox) then begins to dance, gyrating her hips, raising her arms and moving around Lyons as though she is one of Dante’s second circle shadows, caught in the tempest of his lust. On stage, the band (Carlos Flores on guitar, Hank Doughan on keyboard, and Kevin Katich on percussion) begins a jazzy/bluesy riff. Lyons then approaches the stage, bulges his eyes, drops his jaw, and looks out into the crowd. The mood is set, and the tale begins.

Originally published in installments of Playboy Magazine in 1979, and later co-adapted for the stage with Pulitzer Prize winner David Mamet, The Devil and Billy Markham chronicles the luckless Billy Markham and his travels through Hell, Heaven, and Marriage.  Peppered with bravado—(“I ain’t afraid to roll them devilish dice of yours”), loneliness (“When a man forgets how sweet love is, well, Hell ain’t Hell no more”), and bawdiness (“Make it a come to remember, Bill – it’s gotta last you eternity long”)—this is an entertaining text realized well by an entertaining show. Under Amanda McRaven’s direction, Lyons seems to free read and act out all the parts according to his vocal and emotive strengths, ranging from a raspy Devil to a lively Billy, a somewhat effeminate Scuzzy, and everything in between. With the exception of a few moments where the music drowns out his voice, Lyons does a nice job of delivering a mood worthy of Silverstein’s suggestive poetry.

This is an entertaining show, built raucously and performed boisterously that leaves you with a touch of whiskey-tinged naught. Presumably that’s the way producers McRaven and Silverstein want it, and in that they all succeed. 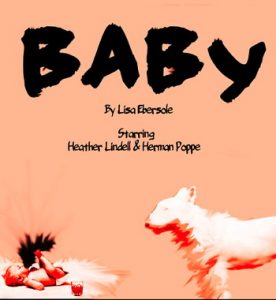 Baby, produced by a Working Theater (Best of Hollywood Fringe 2012 winner), is a play that in a microcosm is about women trying to get pregnant and men resisting. The twist is that the man is twice the age of the woman and on his last leg. Making its world premiere at this year’s Hollywood Fringe Festival, playwright Lisa Ebersole has drafted a lovely text and director Matt Soson a lovely production from it.

Aged film star Ronald West, played by veteran stage actor Herman Poppe, wakes up from a dream of dogs barking. (Do they represent his past? Present? Future? Fortunately, this is never answered decisively.) Alice, played by Heather Lindell (Days of Our Lives), is his live-in girlfriend who quickly arrives to soothe Ronald from his dream. (Because of his illness, she sleeps in another room.) She is sweet, lovely, and above all provides remarkable warmth to West’s cold Maine home. Over the course of a single night, Alice’s desire to have Ronald’s baby manifests itself and is pit against Ronald’s bout with mortality.

Staged solely in a bedroom with a television, night table, and a few pictures of the actor in younger days along the wall, this is a story that both revels in simplicity and, in effect, becomes intensely metaphoric. In stride with the ‘she wants a baby’ theme is the ‘he wants to die/he wants to live forever’ complex that plays like a backbeat to both character’s impulses.

“I want a baby,” Lindell repeatedly states throughout the performance.

But by impregnating Alice, Ronald realizes that he must also give to her the last bits of himself—all his dreams, glorious and less so, all his remembrances of youth—in order to fertilize and pass on whatever life is left in him. It is his youthful vigor that transcends his physical age (what else does he really have at this point?), something that has enamored Alice and, by the end of this play, something that Alice comes to understand fully.

Both actors do well to convey their characters onstage. Poppe has the type of voice and physical demeanor that captures both the classic –albeit antiquated- Hollywood style while Lindell is cutesy, devoted and above all else, believable. Which is exactly what this story hinges on.

Many Fringe shows are short out of necessity. This one, about an hour in length, is so because it hits the mark in its own necessary time. More than anything else, the truth about this play is that it does pretty much everything right. The laughs are there, both on-beat (Alice puts fiber powder in Ronald’s bourbon) and off-beat (Ronald accidentally shoots Alice in the arm). The tender moments are there. The writing is good. The acting is good, and the production is good. In short, Baby is worth seeing. 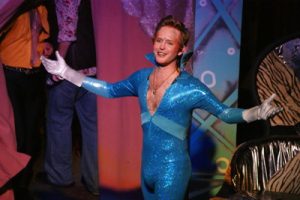 The Lost Moon Radio kids are back at the Fringe with yet another one of their hilarious musical spoofs. This time it’s the alleged playback of an old BBC children’s television show from the seventies that was aired and then banned “after one and a half episodes,” with all the tapes actively destroyed. We’re told that an old beta-tape—the last remaining copy—was recently unearthed in a rummage sale in Kyoto.

Suddenly we, the audience, become the studio audience for the “live-to-air” TV show presentation of “Roger Wodehouse’s Androgymnasium,” flashing back to 1975.

When BBC executives asked glam rock icon Roger Wodehouse to do a children’s television show in 1975, he had two questions. One: Would he be allowed to talk openly about his fluid sexuality? Two: Would there be animal guests? They said yes to both and he agreed to do the show, giving birth to the ultimate glam rock children’s television odyssey: “Roger Wodehouse’s Androgymnasium.” Along with his hard-rocking band and a slew of hapless guests, Roger educates, entertains, and expands the minds of his audiences, adults and children alike.

Out comes glam rocker Roger Wodehouse (Ryan Harrison), an ego maniacal performer often on the verge of hysteria, clad in a shimmery, lamé lycra catsuit and sporting a green-lipsticked and permanent rictus grin throughout. Harrison gives a dead-on impersonation of David Bowie at the height of his bisexual 70s persona—all angsty wailing and aggressive postures. Several sad-sack members of his band “Chelsea Telegraph” also feature, such as when the drummer—‘Tall David,’ played by Michael Wells—sings a disturbing song about a dragon named ‘Mr. Puddles’ and “being touched under your clothes.” It’s hilarious stuff.

Highlights include a puppet of Roger’s half dog, half cat ‘Theseus’ who is undergoing “species reassignment” The creature (played by Lauren Flans) sings “Bow Wow Meow.” There’s also a guest appearance from Nico (Lauren Flans again) who, when not giving monosyllabic answers, speaks in a German-tinged monotone dripping with ennui. She sings a (deliberately) atonal and dreary song about a circus bear. It’s also hilarious!