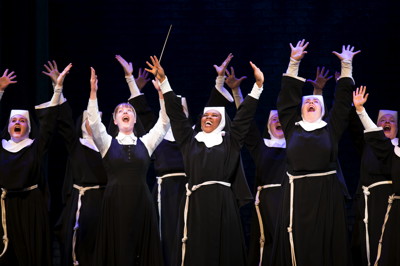 From the moment the curtain goes up and our diva is belting out a song (in a nightclub setting) while flanked by two smooth back up singers, you know you are in good hands and are heading for a fun time.

Sister Act stars Ta’Rea Campbell, whose voice is a powerhouse—and she’s not the only great voice in the show, not by a long shot.

Heavily based on the Whoopie Goldberg-starring movie from 1992 (this musical is produced by Goldberg), Sister Act is an upbeat, hilarious and feel-good musical comedy. Unlike the movie (whose plot is highly reminiscent of Some Like It Hot with nuns instead of a jazz band and Marilyn) the musical features original music by Oscar award-winning composer Alan Menken, rather than a bunch of Motown hit tunes (director Emile Ardolino’s movie had several pop songs throughout). Music is by Alan Menken and lyrics by Glenn Slater, and although their songs are pretty much Motown clones, they’re catchy and hummable even the next day (well, they’re that familiar!)

After being let down once again by her gangster and club-owning married boyfriend, daffy diva Deloris (Ta’Rea Campbell) blunders in right when he’s rubbing someone out. She hightails it into the witness protection program, laying low in a Convent until her ex can be called into court for the murder she witnessed. Unfortunately, the life of a nun is a far cry from the free-wheeling days as a lounge singer… Will this fish-outa-water make it to court with the goons on her trail AND help the convent gain the funds it needs to survives? Our girl’s mad skillz as a singer might just whip the tone-deaf convent choir into shape.

One of the best characters is the stern Mother Superior played by Hollis Resnik with perfect comedic timing.

Another beloved character is Detective ‘Sweaty’ Eddie (E. Clayton Cornelious) who holds a torch for Deloris. His solo number features a quick costume change (and more!) that is a real hoot!

And just wait for the final number before curtain calls — it looks as if a glitter gun exploded over everyone’s costumes! (Costumes designed by Klara Zieglerova.)

Directed by Jerry Zaks, this is a really super fun and fluffy show – two weeks of performances remain!

The performance schedule for Sister Act is Tuesday through Friday at 8pm, Saturday at 2pm & 8pm, and Sunday at 1pm & 6:30pm.

Sister Act has a running time of 2 hours and 45 minutes, including intermission, and is recommended for ages 8 and up.  (Please note that in consideration of audiences, no one under 5 will be admitted to the theatre.)

Orchestra level tickets for Sister Act start at just $25.  Prices are subject to change without notice.