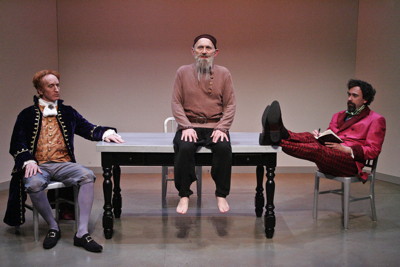 What do Thomas Jefferson, Charles Dickens and Leo Tolstoy have in common? In Scott Carter’s intellectually upscale comedy, all three are smug anthropomorphic spirits, trapped in a single chamber purgatory and forced to communicate despite their disdain for any view contradicting their own.

The gathering takes place on designer Takeshi Kata’s spare set, which is bare except for a desk and three chairs, yet illuminated, as the encounter proceeds, by designer Luke Moyer’s parade of arresting hues—purple, indigo, amber and rose, among others.

Narcissists to their fingertips, each spirit proudly displays his bona fides, confident that he can outshine the other two. This makes for some awkward moments, for whereas Jefferson (Larry Cedar), an aristocrat, rarely ruffles, the flamboyant Dickens (David Melville) and the dour Tolstoy (Armin Shimerman) are soon at each other’s throats, with Tolstoy repelled by Dickens’ peacock-ish parading of his many accomplishments, and Dickens turned off by Tolstoy’s grim intractable manner.

Puzzled by why they’d been brought together, the querulous phantasms temporarily put aside their differences to search for an answer. Looking to pinpoint some common validating truth, they begin a joint effort to reconstruct the Creation story—a collaboration that immediately miscarries when they find it impossible to get past the first sentence in Genesis without bickering intensely over wording and divine intention. Moving on, they compare their worldviews and philosophies one by one, then follow up with confessionals in which they acknowledge their wrongdoings (for Jefferson it’s his slaveholding and illicit relationship with Sally Hemings, for Dickens, father of 10 and champion of the family unit, it’s his teenage mistress Nelly Ternan, and for the more abstemious Tolstoy, the preference of sycophants over family).

Human vanity and pretentiousness can be bottomless sources of humor, and Carter’s intensely funny script, which is deftly directed by Matt August, is wonderfully served both by Cedar as Jefferson, pitch perfect in his send-up of an aloof and condescending patrician, and Melville, who frequently steals the limelight as the clownish and boastful novelist Dickens. Less layered, Shimerman’s tenacious ascetic is effective more as a foil for the others. But beyond the clash of personalities, what makes Carter’s play a delight is his take-no-prisoners dicing of both intellectual pretention and religion. His juiciest target is the Christian notion of Christ as a maker and doer of miracles—a view relished by Dickens—along with this writer’s candy-coated version of Christmas. Jefferson’s hubristic deism and Tolstoy’s fierce dogmatism are also soundly pummeled. And while you don’t need a thorough knowledge of European and American cultural history to laugh, educated folks who enjoy a good philosophical put-down are in for a treat.

The Gospel According to Thomas Jefferson, Charles Dickens and Count Leo Tolstoy: Discord

At the Noho Arts Center