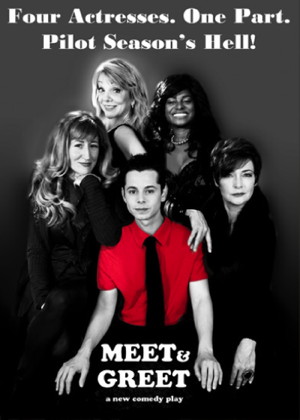 On a scorching day in the San Fernando Valley, four actresses arrive at a casting office to try out for the part of the ‘older woman’ in a sordid sitcom about a May-December romance. They include Broadway diva Margo Jane Marsden (Carolyn Hennesy); former sitcom co-stars Belinda Reid (Vicki Lewis) and Teri Valentine (Teresa Ganzel); and housekeeper-turned-reality-star Desiree White (Daniele Gaither).

Initially convinced she’s a shoo-in for the role, Margo is appalled to learn she is being forced to audition with actors that she considers her inferiors. Belinda, who has spent the past twenty years blaming her former co-star for her various failures, is equally aghast to find herself face-to-face with the bubbly, innocuous Teri once again. And the hot-headed, no-nonsense Desiree has no acting experience at all, a fact Margo finds especially galling. A young, flighty casting assistant (Paul Iacono) attempts to keep all of these oversized egos in check.

The actresses are each desperate to land the part for differing reasons. Margo is unable to perform onstage anymore as her memory is failing her. Teri needs another hit to raise her profile (and help market her line of health and beauty products on QVC). Belinda has spent the past two decades diving in and out of mental health facilities while making a public embarrassment of herself. Danielle’s show has been cancelled due to her family’s refusal to endure embarrassing aspects of their personal lives exposed on television.

Zimmerman and McLaughlin’s one-act play is packed with laughs and industry jabs, and it all works wonderfully well, delivered by a game and capable cast. Hennessy, familiar to fans of the TV show True Blood as the imperious Roslyn Harris, is a riot as the better-than-everyone-else Margo. Ganzel sends up her ’80s goofy blonde image to a tee, and Lewis is all frayed nerves as Belinda. Gaither does a wonderfully vicious parody of those awful ‘real housewives’ — evoking reality star NeNe in particular, since the name of her character’s cancelled show is Cray-Cray for Desiree.

Zimmerman’s direction is fast and furious, which ideal for a piece like this as the one-liners just keep flying. Most all of them hit their intended targets. No subject is safe — social media, Netflix series, reality television and the general vapidity of Hollywood are all skewered. There’s a twist near the end that could’ve been a bad move, but the writers make it work, bring the show to a satisfying conclusion.

Check the official schedule for reservations and information.