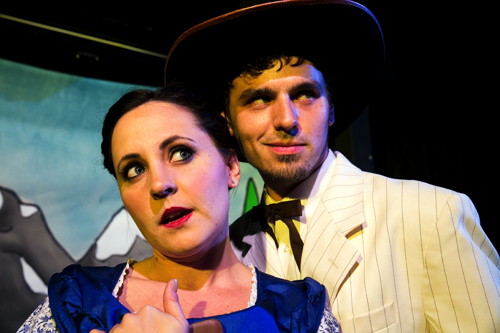 Dear #LAThtr fans! Here is an intro and link to my newest theater review for the critical website Stage Raw — which contains the latest arts and theater coverage from our intrepid team of journalists & critics.

Cannibal! The Musical   RECOMMENDED Trey Parker is best known for being one half of the duo who created, and still write, the irreverent animated TV show South Park. He and Matt Stone also recently earned Tony Awards for their smash-hit musical The Book of Mormon. Working solo, Parker’s hysterically funny western spoof Cannibal! The Musical feels like an appealing mash-up between Book of Mormon and South Park with a new storyline and setting — bumbling prospectors go in search of gold in 1872 — added to the mix. (Book, music and lyrics are by New Cannibal Society and this show is directed by Tito Fleetwood Ladd with Julianne Donnelle serving as assistant director.)

Cannibal! The Musical is making its Los Angeles premiere and Coeurage is the perfect company to present it. The highly talented troupe is crammed with excellent singers and musicians, and this show’s large cast of 23 is well led by Musical Director Gregory Nabours, who also amusingly appears throughout as a slimy prosecutor Mills. Actually several of the on-stage musicians occasionally appear in memorable roles, and it was thoroughly enjoyable to see them effortlessly hand off their instruments to another performer and don a costume piece. Mikey De Lara (on guitar) is a standout as the stoic Indian Chief, while ensemble members and musicians Kari Lee and Jane Lui give fantastic impersonations of the Japanese-speaking native Americans. Yeah — in Trey Parker’s world, the native Americans wield samurai swords and their Chief imparts wisdom with a thick Japanese accent, intoning advice such as, don’t venture into the Colorado mountains during wintertime…

Cannibal! The Musical plays through November 22 at the Lyric-Hyperion Theatre & Cafe, 2106 Hyperion Avenue in Los Angeles, 90027. Fris, November 14, and 21 at 8pm; Sats, November 15, and 22 at 8pm and midnight. All seats are available on a Pay What You Want basis, and may be reserved online here or by calling (323) 944-2165. Box office is kept open during intermission and after performances.