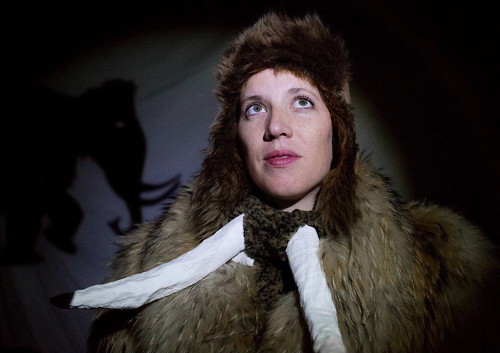 A litany of thoughts and ideas are explored surrounding the human compulsion to join and to love, along with the various natures in our being from which those instincts might spring from in the genuinely evocative and moving production of Buran Theatre’s Mammoth: A De-Extinction Love Story, which wrapped its brief, two night stint at Highways Performance Space this past Saturday night.

In the first of four sequences in the play, we discover Megan Branch (named “Beloved” in the program), alone on the spare stage covered with a white canvas, as designed by Nicholas Kostner. After a few minutes of solitude, she is joined by Laurel Butler (“Lover”), who expresses that she has come across the glacier to tell her that she loves her. As both are dressed in simple black pants and grey sweatshirts by costume designer Jennifer Stimple Kamei, we seem to be left intentionally in the dark as to whether we are watching humans or mammoths. This ambiguity is enforced by the awkward, innocent, and almost primary level in which they try to communicate with each other and ultimately to try to connect, to love.

And this initial expression of ‘love at first contact’ sets up some interesting questions for the evening. If our players are, indeed, mammoths, is the concept of love at first contact something that is simply inseparably tied to the animal instinct to reproduce, to carry on the species? And if human, is this concept tied to our innate desire to simply not be alone? In the face of complete solitude, could you find love in anyone? Or despite our advanced cerebral cortex, are our compulsions for love simply echoes of the most fundamental cellular drive to reproduce and to carry on?

In response to Beloved’s question as to what she’s doing there, Lover responds, “The same as you. Looking for shadows in the ice.” This search in the ice seems to represent a need for a connection to a life and love that once existed but is no longer there. The harder you search for it and the more it retreats into the ice, the more we doubt it was ever there. And is there anything more despairing in the condition of life than the loss of love and the doubt that it could ever return? Lover / Beloved’s is a love affair that takes a rather surprising twist of fate, however, when Lover poisons both of them, inadvertently, through a would-be loving gesture of feeding them both soup that she made. When the beloved asks why she would do this, the Lover shrugs and replies, “Because I love you.” This sets up a parallel theme running throughout the piece, examining why love is so often accompanied by or inexorably linked to pain and destruction.

Our second sequence moves us to a science lab, where the question of whether Beloved is human or mammal is settled into the former – at least temporarily – when she joins “Shadow” (a hilariously off kilter and neurotic Lara Thomas Ducey) and the Scientist (searingly intense Lisa Maley) as they begin try to thaw out a tusk that was taken from the ice. The Scientist begins to rattle off details about their work, a kind of Jurassic Park type attempt to re-animate and re-establish the Mammoth. Eventually, Shadow and Beloved are left alone in the lab where the former reveals that there has been advancement in the work, but then awkwardly tried to connect with her through an unusual and long-winded joke about fish. Again, we are faced with contradictions of a group of people on the verge of re-creating life, yet seemingly incapable of the simplest intercourse and relations. When the Scientist returns, she is shown by the Shadow the full spectrum of the lab work in the form of an actual beating Mammoth heart. In her desire to see it and hold it, she ends up killing it. Again, we are left with the questions of how effective it is to look into the past or to attempt re-generate something that may be forever dead and buried. Is the attempt to re-vitalized the mammoth a desperate attempt to revitalize herself. In grasping so desperately to the possibility, do we ultimately kill the potential? “Our evolution need not be random,” the Scientist protests. But in such a proclamation, is she ignoring the natural pattern of life. Once lost, do we look back to try to resuscitate the potential of life and love, or must we simply relinquish the loss to the past and move forward blindly, always in hope?

Our third sequence takes an abrupt turn away from where we’ve been thus far and shows us three women – Spring, Summer, and Fall (Smaranda Luna, Elisa Noemi, and Lise Hart, respectively), in a rather idyllic and natural setting, trying to commune with God. In their contemplations, we find that even as Fall and Summer connect with each other, Summer cannot help but laugh at Spring’s pain and confesses that although she likes her, she cannot help wanting to hurt her. While Fall relays a story of forcing a girl she liked to kiss her because “there was no one else and I needed it very badly.” Further contradictions between the impulses of our better natures and our worse. Can love and primal instinct co-exist without eventual pain, violence, and destruction?

Finally, we return to the glacier, where Lover and Beloved have returned wearing heavy hooded coats. The ambiguity of their identities in sequence one (human or mammoth) ultimately settled here by the eventual arrival of the Hunter (a robust and vibrant Sasha A. Ali) who kills Beloved, leaving the Lover in a frozen, open mouthed shock. Hunter dispenses a monologue where she moves from expressing an empathetic despair and regret to Lover over not seeing her and therefor unwittingly killing her beloved to defensively pronouncing that even if she had seen them both, she would have had to kill one, and it would have been a toss up as to who would’ve been killed. The great irony of the kill ultimately coming when the Hunter looks off stage, raises her hands and pronounces, “Look what I got you!” The painful and brutal destruction of one love is a gesture of another love.   The savage reality of survival of the fittest whittled down to a gesture of affection. After the Lover has been left to a sing a mournful dirge to the gutted carcass of her lover, we discover the arrival of a parka clad Shadow who enters to begin the following exchange that ends the show:

Sh: I love you

Despite our pain, despite the loss, despite a pattern that may continue over and over again, we are uncontrollably driven to connect and love again. Is this drive something so anciently cellular that we are intrinsically driven by the same primordial motivations that drove our ancient mammalian ancestors? Or is love and the inexorable pain it so often brings simply a cost we are willing to pay to avoid the despair of loneliness? Writer Adam R. Burnett does not seem concerned with answering these questions as much as presenting ideas for us to contemplate. In addition, the ideas of the piece are so abstract and poetic, that the thoughts I present in this review might well be completely different from those of a patron sitting right next to me, let alone from the intentions of the playwright, himself. But that is what the most invigorating artists present to us: an intellectual and emotional canvas for us to ruminate upon and debate, and in this fashion, Burnett has succeeded thoroughly.

Mammoth gives the viewer much to chew on and many concepts to deliberate, and in that way, we are granted a theatrical feast. An argument could be made for unevenness in the piece’s four sequences (the third piece, in particular, at times seems somewhat obtuse). However, the point of this piece does not seem to be in presenting a straightforward, linear tenet but rather impressions and tones that continue to stimulate and challenge our perspectives long after we’ve left the theatre. I found myself asking, as well, why the show was cast entirely with women, when the piece seemed to be grappling with themes that concerned the whole of humanity, and yet, upon reflection, I found that the potential addition of men to this piece would simply seem to add political elements not intended in its primary themes. Director Anne Cecilia Haney deftly handles her formidable ensemble with a light hand and considerable restraint, keeping blocking and movement minimal and very specific.

The only thing I felt the production could really benefit from was a stronger presence technically, in sound, lights, and projection. With such a broad canvas of epic ideas, the possibility for a strong technical impact was somewhat wasted.

However, I chalked this up to the fact that Buran is a visiting, New York-based company and, most likely, did not have adequate time to create within the space. The week after their stint at Highways, Buran is taking Mammoth to Albequerque for another run. A young and vibrant company who creates works over a two-year development process in NYC and then tours to communities in the U.S., where the show is re-made and re-cast in each location, Buran is a collective with much to say and a uniquely engaging manner of storytelling.

L.A. was privileged to have them here briefly, and we will look forward to their swift return.