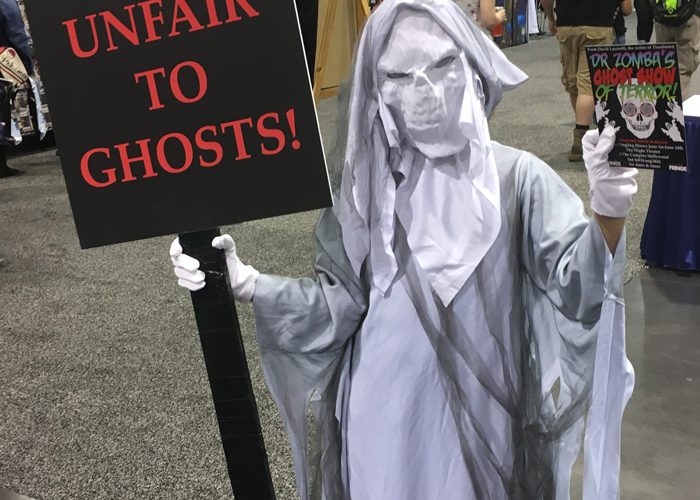 The writer talks about the ghost shows of yore, their relevance in today’s society and its manifestation at the Fringe.

Making its world premiere at the Fringe is the intriguing-sounding Dr. Zomba’s Ghost Show of Terror, a throwback to the theatrical ghost shows that were popular from the 1930s to the 1960s. Writer David Lucarelli was kind enough to answer some questions about the show.

What was the inspiration behind the creation of Dr. Zomba?

I was at Comic-Con one year and I stumbled on a book called “Ghost Masters,” by Mark Walker, about the history of the ghost shows. I found out the ghost shows were this spooky, funny, scary magic show that featured hypnotism, mind reading, a séance, monsters and ghosts. I was immediately fascinated by this lost bit of spooky Americana. I really wanted to see one, but since very few people are doing them anymore and it’s kind of a lost art. I figured the only way to see a ghost show was to write one and put it on myself!

What will audiences be experiencing? Is the piece immersive?

The climax of every ghost show is an immersive “blackout sequence,” in which the audience is in total darkness and surrounded by supernatural phenomena they can see, hear and feel! They had all kinds of tricks to make this happen. We went back and studied the ghost show manuals from the ’50s, and came up with a few new tricks of our own.

What’s your personal history with the ghost shows of yore?

I’m a monster kid and a horror writer. I grew up loving Halloween, haunted houses, Scooby Doo, TV horror hosts, Rocky Horror, Famous Monsters of Filmland, etc. This show is for all the misfits like me. 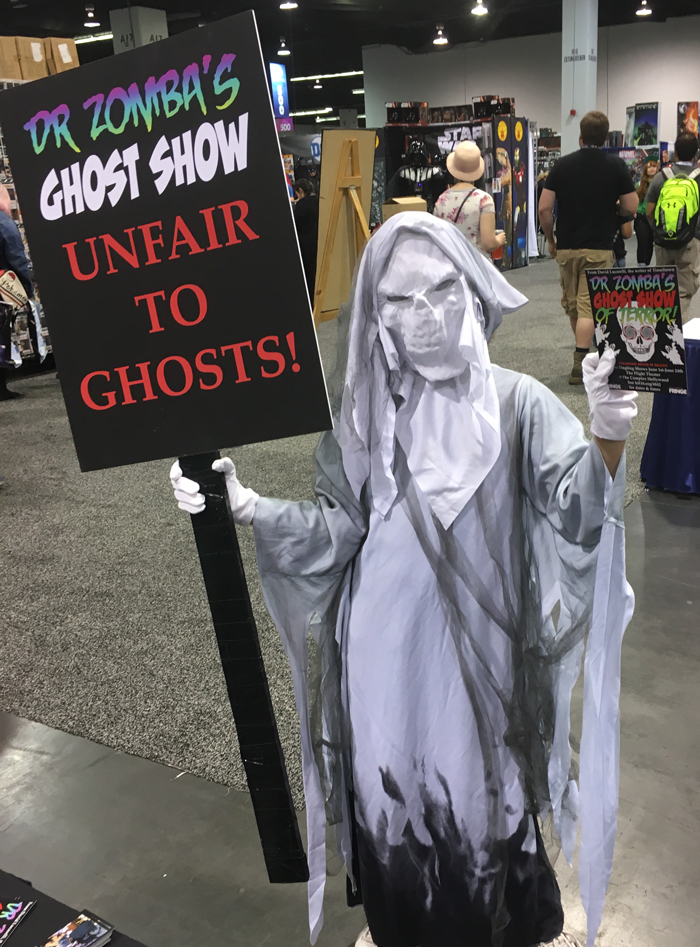 Dr. Silkini’s Ghost Show was considered one of the top ghost shows in the 1950’s. A few years ago when the people that had the rights to Dr. Silkini were looking to bring the show back, they hand-picked our star, David M Beach, to be the new Doctor Silkini. That didn’t end up happening, but we’ve very lucky to have David as the star of Doctor Zomba. David is an actor, comedian, magician, juggler and ventriloquist, all of which makes the perfect skill set for him to be the ringmaster of our ghost show!

Kerr Lordygan plays Ear-Gore. He is a Fringe veteran and an award winning actor, director and playwright. Tamara Torres plays Sirena. She’s an actress and dancer who has appeared in film, television and music videos. S. Alessandro Martinez is a horror and fantasy writer who is making his stage debut as Dracula. Our director, Kevin Wetmore, is the Professor and Chair of Theater Arts at Loyola Marymount University. Fight choreography is one of his specialties and we’ll be utilizing that talent — among many others — in the ghost show.

We allowed ourselves twice the normal time to set up our show (30 minutes, vs. the usual 15). And since we’re the final late night show at the Flight theater every Saturday night, we won’t have anybody breathing down our necks on the back end, either.

Abacab Studios is the name for all my creative projects. I stumbled on the Fringe Fest last year when a co-worker at Fox invited me to see her perform in a play and I ended up going to four other shows! You can find out more about my other work at abacabstudios.com.

And what makes the show an ideal fit for the Fringe?

The ghost show is a lost art, but you can see its influence in the séances at the Magic Castle, in The Rocky Horror Picture Show, and in the graphics of artists like Rob Zombie. It’s in some ways the last vestige of vaudeville, and in other ways is still on the cutting edge of immersive experiences.

So many shows sound so compelling I want to see them all! I won’t make it, but I’m going to try. Blackballed, about the history of Negro League Baseball, sounds fascinating. Lights Out in the Hermit’s Cave is a performance of some of the classic spooky radio shows of the 30s and 40s. Dracula’s Taste Test and Cthulhu: The Musical! both sound like really fun shows that might appeal to fans of Doctor Zomba’s Ghost Show.

Final comments: We want as many people to see this ghost show as possible. You can save $3.00 off tickets with discount code: Facebook.

For Fringe participants, tickets are only $5.00 for all shows, and the show is free for Fringe Volunteers.

Tickets can be purchased on the Fringe site.

From the archives! Here is my interview with Bruce Willis, star of Last Man Standing, first published in September 1996. With it’s unpaved streets and dust-caked, rickety buildings, Jericho, Texas is an unlikely...