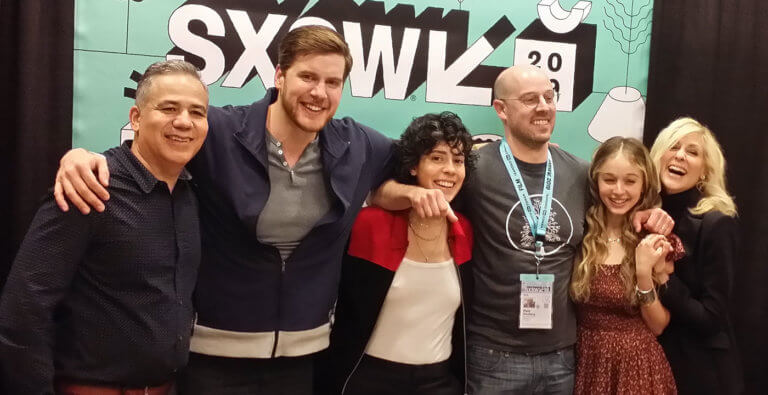 Roberta Colindrez stars as Lex, a repressed young woman who has the uncanny ability to connect with the dying and help them to cross over peacefully.

Gary (John Ortiz) is her awkward but loving father and business partner who wants nothing more than to help his daughter find fulfillment. Nora (Carson Meyer) is a fiercely devoted former client who’s decided to devote her life to helping Lex. Spencer (Zachary Spicer) is a shady psychic who is drawn in by the distant young woman’s authenticity.

When Lex meets Val (Judith Light), a feisty cancer patient, she encounters her greatest challenge yet — Val refuses to play by her rules and slip away peacefully. She finds herself being dragged out of her safe place, whether she wants to go or not.

On the eve of Ms. White Light’s debut, Mr. Shoulberg and the cast sat down with ArtsBeat LA to talk about the film and its well-realized characters.

KURT GARDNER: What was the genesis of Ms. White Light?

PAUL SHOULBERG: I was sort of obsessed with death. Evidently, I’m going to die at some point, and this was something I just had to get out into the world.

Once it was there, I handed it over to [producer and co-star Zachary Spicer] and [producer John Armstrong] and brought on a casting director. Then these amazing people came on board.

How were you cast in the film?

Judith Light: John Ortiz and I share an agent in New York, Jason Gutman, and Jason said, “My client, John Ortiz, is in this movie,” and he told me to read the script, which I did. And I was so moved.

Not only did I love this script, but I thought this character, Val, was really vital and alive. I knew Roberta was working on the film, too, so I decided, “I want to work with this man and his team. I like very much what Pigasus [the production company] is doing in Indiana.” So all of the pieces really came together for me, all at the same time, and it turned out to be right.

Tell us about Lex. She’s so multi-layered.

Roberta Colindrez: Lex is a pretty complicated person. She’s living at home with her father. Her mother’s passed away. In an effort to not deal with stuff in her own life, she’s discovered this “thing” she didn’t expect, which is the ability to connect with people who are dying. And the lack of answers, the resolution with the end of her mother’s life…

She’s using this to fill in gaps.

RC: Yeah, and not have to ask herself anything, or answer anything. I think she masks her feelings by being acerbic, but she really does want to connect with people. Then she meets this client who’s the bane of her existence, and by figuring each other out, they figure themselves out.

What’s the emotional connection between Val and Lex?

RC: I don’t have much experience with being there when someone’s dying, but it seems to me that someone at the end of their life would try anything to hold on as long as possible. Then, Lex meets this person who says, “We can be light about this. I just don’t want to be alone.” There’s something about Val’s intellect and her humor which is something she has never encountered before. It’s a puzzle to figure out.

And the characters of Nora and Spencer are drawn to Lex. What’s the pull here?

Carson Meyer: I think for Nora, as a young person with cancer, she’s been overly sheltered by her parents. She was drawn to someone who treated her like an adult — seriously. Lex didn’t pity her or feel bad for her. She talked to her with real talk. There was an immediate friendship because they’re both deep characters. They have more going on inside than they get credit for.

Zachary Spicer: I think Spencer just can’t figure her out, especially in the beginning. He has developed this line of work for himself that is, to him, kind of a gimmick. He has the talent to be able to sell people on a certain idea. It’s a type of connection that doesn’t actually take place. Lex is the exact opposite.

He meets Lex and he’s like, “What do you mean you actually connect with people? Nobody does that! I provide a service. They pay for my service. I do it, and I’m on my way out. What do you mean by actually comforting and trying to remove fear from somebody?”

At first, he just can’t work out who this person is, and then it develops into an endearment, a kind of respect. I don’t think Spencer was aware that this was something that was missing from his own life.

And Dad’s trying to get Lex to move along, right?

John Ortiz: Yes, to move along, To reach her full potential and to get more out of life. Definitely to have a better life than he has had.

I grew up in a world where fathers disappeared — a land of single moms. I’ve always had this fascination with what it could be. So when I read the script, I thought, “Yeah! This guy is there. He loves her. He cares for her and he’s pushing her. Even though it’s not necessarily smooth or ideal, it’s the need to do right by her — and the need is really strong. It paralleled my own need growing up, so it was great to be able to tap into that.

With the issues [in the film] as deep as they are, the genre of comedy presented a great challenge. It was fun to figure it out; to navigate those waters with all of these deep issues. Not being afraid of really getting in there and mixing it up. And that’s what we were going for. A real texture; a real tone. That, to me, is everything.

How did you work with the cast to help them get into your characters?

PS: I fully believe that if you cast properly, you don’t have to do the work of getting them into character. If you cast them the right way, they’re going to show up 95 percent ready to go. If you cast incorrectly, you’re fucked. The casting process went so well. We got exactly who we wanted and needed.

There are a lot of tonal shifts in the film. It goes from comedy to drama — sometimes in a single beat. I wanted to make sure that these actors all had a natural sense of humor and a sense of empathy. I just wanted everything they did to be true to the characters; to stay honest and grounded.

I think too often the director gets credit for the actors’ performances, when in fact they should mainly get credit for how they cast the film.

Knowing that we’re all on the same level with the humor and the drama, just from the conversations that we had, I think that was a really powerful directing tool. There are times when actors can just go on and do what they think it should be and not be able to reel it in, but here it’s about knowing what you intended with the scene when you wrote it.

JL: And that actually speaks to something I think is valuable. Whenever I watch a film, I don’t want to see the director’s hand. I think that detracts from the story, and where Paul comes from is a place of collaboration, and I think that’s part of his directorial gift.

When I got to town and we sat down together and started talking about these scenes, you included Roberta and me in the creative process — the things that worked and the things that didn’t necessarily work. Giving us safe boundaries like you give to kids so they know that they feel safe is another part of your gift. It was that kind of collaboration that definitely set the tone for all of us working with you.

CM: And time. It never felt rushed. I know in indie film time is valuable, but we never felt the stress, which is nice.

Zachary, you and Paul have worked together before, right?

ZS: Yes, Paul wrote the very first play I did in college. We met at Indiana University, where he was in grad school and I was an undergrad. I’ve been fortunate enough to be one of the people he sends his stuff to. He has a one-of-a-kind voice that only improves with every script he writes. We did a movie four years ago called The Good Catholic, which I though at the point was the best thing he’d ever written. Then I read Ms. White Light and thought, “Now, this is the best thing he’s written!”

Hopefully, we’ll just be able to keep doing that over and over again.

Coming up, on Sunday May 22nd, is a massive street art block party that promises to be a ton of fun. Above photo – [email protected]—-Photograph[email protected] Arts Bridging the Gap...