A magical evening of dance and spectacle, “The Butterfly Lovers,” hailed as China”™s Romeo and Juliet, is being performed this weekend ONLY by the Beijing Dance Academy (BDA) – the most prestigious dance academy in China.

LA is the first stop of a five-city west coast tour including San Francisco, Sacramento, Portland, and Seattle.

The U.S. premiere of “The Butterfly Lovers,” is being staged in celebration of the Chinese New Year – The Year of the Tiger – presented by Chinus Cultural Productions and China Arts and Entertainment Group.

Performances include “Singing of the Wind,” gold medal recipient for choreography and silver medalist for performance at the First CCTV Dance Competition.

On a recent tour in France, Le Republic and L”™Independent featured front-page photos of the Beijing Dance Academy Resident Dance Company, praising it as “the best classical, contemporary and traditional dance company out of China, providing French audiences with a fabulous and unprecedented night of enjoyment.”

The production is choreographed by Zhang Jianmin to China”™s most famous violin concerto “˜The Butterfly Lovers,”™ written in 1959 by Chinese composers Chen Gang and He Zhanhao.

The lead roles will be performed by Wang Zihan and Shao Junting.

Set in the Eastern Jin Dynasty of China (circa 265-420), the legend of “The Butterfly Lovers” tells the tragic tale of the star-crossed lovers Zhu Yingtai and Liang Shanbo.

For anyone who enjoys their high-Art mixed with traditional culture, this production is a must-see.

ALSO -Â  Ring in the Chinese New Year and enjoy the colorful celebration along North Broadway in Chinatown, Los Angeles, of the Golden Dragon Parade and Festival 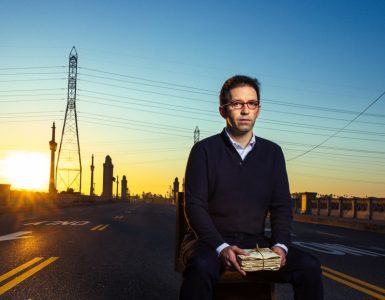 WORLD PREMIERE of The Present. Written & Performed by Helder Guimarães Directed by Frank Marshall May 7 – June 7, 2020 Purchase tickets here. The Present is inspired by Helder...