A dazzling feast of traditional dance and music – Forever Flamenco!

Flamenco superstars from Spain – the magnificent Lakshmi Basile of Sevilla, Adriana Maresma-Fois, of Jerez de la Frontera, Manuel Gutierrez (“Manuel de la Cruz”) of Cordoba and cantaor (singer) Vicente Griego – will be appearing for one night only in Forever Flamenco! The acclaimed series from The Fountain Theatre returns to the Barnsdall Gallery Theatre in Hollywood on Sunday, February 13th 2011, at 8pm.

The fiery dancers will be accompanied by renowned singer Vicente Griego and the electrifying guitarist duo Juan Antonio Gomez and Gabriel Osuna.

Now in their seventh year, each show in the series features a roster of world-class flamenco dancers, singers and musicians drawn from the rich pool of flamenco artists here in Southern California, with additional guest artists brought in from San Francisco, Albuquerque and – the motherland of flamenco – Spain.

Flamenco is a style of music and dance that is native to several regions of southern Spain.

Along with its Romani origins, Spanish, Byzantine, Sephardic and Moorish elements have often been cited as influences in the development of flamenco.

It has frequently been asserted that these influences coalesced near the end of the reconquista, in the 15th century.

The origins of the word flamenco are unclear as it was not recorded until the late 18th century.

Flamenco is popularly depicted as being the music of Andulusian gitanos (gypsies) but historically its roots are in mainstream Andalusian society, in the latter half of the 18th century.

Other regions, notably Extremadura and Murcia, have also contributed to the development of flamenco, and many flamenco artists have been born outside the gitano community. Latin American and especially Cuban influences have also contributed, as evidenced in the dances of “Ida y Vuelta”.

This is the best flamenco experience available in town – a thrilling combination of hard work, preparation and spontaneous exploration. 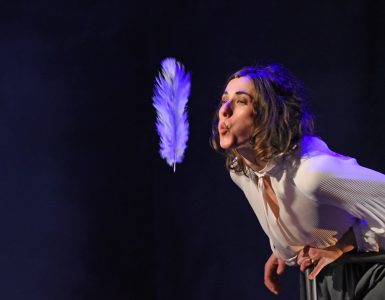 Four Larks’ riveting one-act opera Frankenstein is a visual and aural treat that engages you from beginning to end with its marvelous staging, haunting music and mesmerizing performances. Written just over 200 years...