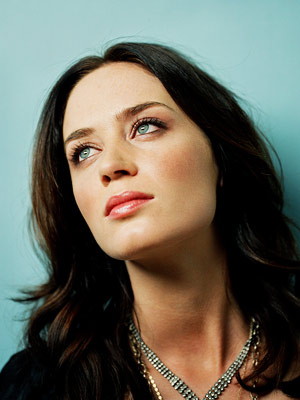 This catty yet comic role may have been her breakout performance in Hollywood, but Blunt was already familiar to her fellow Brits for inhabiting several intriguing characters earlier that decade, both on stage and screen. From playing a smitten lesbian Tamsin in Pawel Pawlikowski”™s lush and moody teen romance, My Summer of Love (2004), to a chilly, estranged daughter in Stephen Poliakoff”™s 2005 TV drama Gideon”™s Daughter, opposite Bill Nighy, Blunt”™s choices seem designed to showcase her impressive range as an actress and even a singer. According to the imdb, co-star Meryl Streep has praised Blunt as, “˜the best young actress I”™ve worked with in some time, perhaps ever”™.

Now the doe-eyed, porcelain-skinned, London-born brunette is appearing in a romantic drama with a sci-fi thriller edge, opposite hunky Matt Damon, in The Adjustment Bureau. Damon plays a man who gains an unauthorized glimpse of the future Fate has planned for him, only to realise he wants something else. On the verge of winning a seat in the U.S. Senate, ambitious politician David (Damon) meets beautiful, contemporary ballerina Elise (Emily Blunt) and both are instantly smitten with each other. But mysterious men pop up and engineer events to keep the two apart.

Damon and Blunt”™s characters fall in love at first sight but some creepy blokes in fedoras and trench coats intervene. These are the usually unseen men who control Fate while lurking in the shadows, all led by a suave Terence Stamp. Apparently Damon and Blunt”™s encounter was designed to rekindle his passion for politics but the pair is never supposed to meet again.

David soon learns he is battling the agents of Fate itself, the shadowy men of The Adjustment Bureau, who will do everything in their considerable power to prevent the pair from being together. Damon”™s character must either let his dream girl go and accept a predetermined path or take hold of the reins of his own destiny.

Similar in both tone and theme to last year”™s Inception, The Adjustment Bureau also deals with meta-reality and dreams, but infuses the drama with the perfume of romance. Written and directed by George Nolfi, the movie”™s thrilling plot is based on Philip K. Dick”™s futuristic short story “˜The Adjustment Team.”™
Blunt seems to gain nothing but praise wherever she goes. Power-player Tom Hanks had his pick of Hollywood ingÃ©nues but cast Blunt in a sexy cameo in the political comedy he produced and starred in, the Mike Nichols”™ directed Charlie Wilson”™s War (2007). At a recent awards event in Hollywood, Matt Damon gushed about their forthcoming movie, saying, “Emily”™s just one of the best actresses I”™ve ever met and a wonderful person.”

For our one-on-one meeting in a hotel room in Los Angeles, Blunt is curled up in an armchair for the day, cheerfully fielding questions from a procession of journos.Â  As we hadn”™t been shown the completed film, I asked Blunt to tell me about her character. “Elise is a contemporary ballet dancer. She”™s a really independent, feisty, funny and quite strong-willed girl. She”™s quite mysterious, in a way, because she”™s quite tough and opinionated. [She laughs.]Â  She meet”™s Matt”™s character after she”™s crashed a wedding, and they have this chance encounter in a men”™s bathroom that”™s quite intense and profound for the both of them, because they really connect. But then the film becomes about them trying to be together. There”™s this ominous presence of the “˜Adjustment Bureau”™ who are trying to keep them apart for various reasons. But my character is blissfully unaware of them, because Matt”™s character protects her until the final part, when it starts to get dangerous.”

The twenty-eight year old actress was born Emily Olivia Leah Blunt on February 23, 1983, in the small, posh University town of Roehampton, in South West London, England, where Sean Connery also resides. Growing up as one of four children to professional parents, she attended Ibstock Place School, a co-ed private school at Roehampton. Suffering from a stammer since she was small, one of Blunt”™s teachers encouraged her to playact by speaking with a different voice. Blunt found she could lose her stammer if she concentrated on assuming different accents. Â It was an important turning point for the shy twelve-year-old who began to dream of acting for a career.

Attending a prestigious co-ed boarding school, Hurtwood House, for her secondary years, Blunt excelled at sports, including horseback riding, as well as cello and singing. She took two years of drama studies offered at Hurtwood and landed plum roles in various school plays, honing her acting skills and further eradicating her childhood stammer by adopting Northern British accents. She has said that practice helped her escape from what she saw as a socially crippling difficulty.

It was while Blunt was at Hurtwood House that she starred in a school play that got picked up by the Edinburgh Festival, during August 2000. By the time Blunt left school she had landed a London agent, Ken McReddie, who led her to the West End and the BBC. He helped her land roles in several period dramas on stage as well as in TV productions, such as “˜Foyle”™s War”™, “˜Henry VIII”™, and “˜Empire”™.

Blunt appears to have lead a more charmed life than the typical struggling actor. Her first professional acting job was in 2001, appearing alongside Dame Judi Dench in the Peter Hall-directed play The Royal Family at the Haymarket Theatre in London”™s West End. It won her instant acclaim, in the form of an Evening Standard Award for best newcomer in theatre. In 2002, she played Juliet in Romeo and Juliet at the prestigious Chichester Festival.

Notable movie roles since then include the neurotic and drolly sarcastic Emily in The Devil Wears Prada (2006) and her role as Prudie, an uptight French teacher The Jane Austen Book Club (2007).Â  Blunt won a Golden Globe in 2007 for Gideon”™s Daughter, which features her haunting performance of a pretty, mournful folksong entitled “˜Papa,”™ accompanied only by guitar.

In spite of this kind of critical acclaim early into her career, Blunt says she accepts the fact that it was the high-profile success of Prada that gave her career a whole new trajectory, that celebrity glitter than only a tinseltown hit movie can bestow. The numerous nominations for various awards, including a BAFTA and a Golden Globe for best supporting actress, as well as an MTV Movie Award for best comedic performance, just helped to solidify the buzz.

Landing the lead role in the Martin Scorsese-produced royal drama The Young Victoria (2009) was no mean feat. In a recent interview with Movieline Magazine, Blunt confided she fought hard for the title role in this romantic period film, that many considered to be mere Oscar-bait and which strived for, but fell short of, the success of the Cate Blanchett-starrer Elizabeth (1998).Â  Blunt was reported as saying, “I came in there and I really wanted it. I was aware that I was probably at the end of an elimination process for many other actors, and I said that to the producers. I was completely aware that everyone wanted that role. I think they thought there was something quite royal about demanding it like that, so they thought they”™d go with “the bossy actor.”

While The Young Victoria received some awards nominations, the costume romance landed few big prizes for the young star, rather winning an Oscar for Best Costumes and BAFTA Film Awards for Best Costume and Best Makeup and Hair. Next came a high-profile turn opposite Benicio Del Toro and Anthony Hopkins in the somewhat risible but lavish remake of the classic Universal Studios horror flick The Wolf Man (2010).

On a personal note, Blunt met her first high-profile boyfriend, Canadian crooner Michael Buble, at the Australian Logie Awards in 2005, and they lived a jet-setting lifestyle together for about three years. Subsequently Blunt”™s friend and Prada co-star Anne Hathaway introduced her to comedian John Krasinski. The pair married in the summer of last year on Lake Como, at the Italian estate of their friend, George Clooney.

So how did that come about? Was it because she”™d co-starred with Matt Damon?! Blunt protests, “No, no, no – my husband is friends with George, yeah. I”™m very lucky. George was so generous to let us use his place! It”™s so beautiful.”Â  But was he there?Â  Blunt laughs with incredulity at the question, “Yeah – it”™s his place!Â  We didn”™t ask him to leave!!Â  [She laughs.]Â  It was a wonderful day.”

Just another highlight in a remarkable career and life.

But can she dance?!

I read on the “˜internets”™ [Blunt giggles] that you studied sports, cello and singing, but did you ever study ballet?

Yet you play a contemporary ballet dancer. Were you completely faking it?!

“I had to learn!” Blunt”™s voice almost cracks with incredulity as she recalls the effort. “It was so stressful. I had seven weeks prep, before the movie started shooting. It was six days a week, two hours in the gym, then two hours in the dance studio, every day.

“I trained with this amazing company called Cedar Lake, who are quite a revolutionary modern dance company in New York.

“I had a horrible diet, as well, where I had to eat very little. And I was so miserable, because I love to eat well, and eat cookies and stuff like that. So that was the worst. The physical challenge for this movie was unlike anything I have ever experienced before. I”™ve never experienced anything that was this much of an endurance test. But actually, I found it very rewarding. The prospect of learning how to dance, the idea of it to most people is so embarrassing, because it is so exposing. You can so easily look so silly trying to learn how to do that [while still seated, Blunt executes a graceful gesture with a flourish] and it”™s such a magnificent art form, and so unless you are trained for years”¦ You”™re supposed to be graceful, but I”™m not!Â  Not when you first turn up in the dance studio in your tights with your knees knocking! I was so embarrassed, I was mortified.”