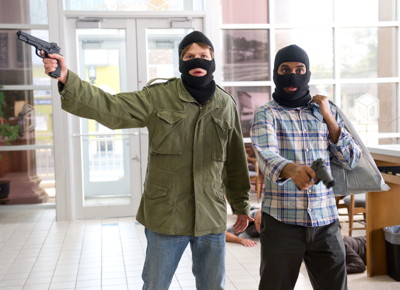 When best friends Nick (Jesse Eisenberg) and Chet (Aziz Ansari) hit a rough patch in their long-term friendship, one doubts they may ever have the desire to patch things up.  That is until con men strap a bomb to Nick’s chest and force him not only to rob a bank but also to ask for help from the one person he swore never to speak to again.  His ole pal Chet.

Meanwhile the con men townie losers Dwayne and Travis (Danny McBride and Nick Swardson) plot a dismal yet droll plan to hire an assassin to off Dwayne’s domineering dad, affectionately called ‘The Major’ and awesomely played by Fred Ward.  Seems ‘The Major’ has been cramping Dwayne’s style by telling him to get off his ass and get a job. Getting down with their favorite girls at the local strip club, a hit man idea takes form. Two seemingly harmless losers are all of a sudden messing with life and death.

The crazy plot ensues and, without telling the entire story, let me just make it simple.  This movie is great.  It’s heartfelt and fanciful yet deepened by the strong relationships portrayed on screen by actors smart and talented enough to bring depth to a screwball comedy with a seriously great script.  Said screenplay is the first produced screenplay from scribe Michael Diliberti and actually portrays a sort of untainted Hollywood goodness that often shows up in comedian flicks such as gems like Orange County and Harold and Kumar (also buddy stories with feel good endings.)

The absolute highlight of the film is the dare I say genius comedic performance of Michael Peña as Chango, the highly trained assassin. Thanks to his comedic chops, this was a performance I couldn’t miss one moment of, making it through the entire film without a bathroom break.  Well-thought out and character-driven, the role was completely unique and obviously sculpted by Pena’s attention to detail.  Aziz’s usual funny man, ‘deer in the headlights’ antics work well, especially when paired with the very serious and committed Eisenberg (even in a comedy the actor’s emotional  scenes involve involuntary face twitches that only add sincerity to a hilarious script.)

Amidst the summer blockbusters perhaps the real worth of your 15 bucks lies in the hands of some small town crooks and a couple of dudes aiming to make you laugh.  They succeed.  See it.

30 Minutes or Less is now playing in US cinemas.