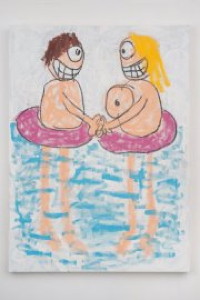 Glad Day by Jay Stuckey – exhibition at The Company 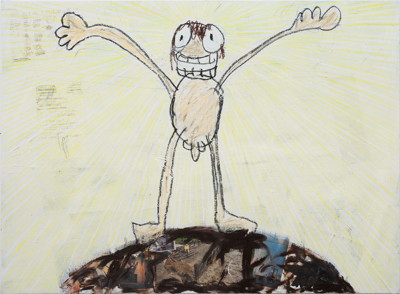 THE COMPANY is staging Glad Day, artist Jay Stuckey’s first solo show at their gallery, on exhibit from September 3 through October 1, 2011.  A selection of large-scale paintings will be presented at the Chinatown gallery. There will be an opening reception on Saturday, September 17th  from 6-8pm.

Employing painting as a storytelling device, Stuckey’s naïf style paintings are intended to be humorous and approachable, rather than instill the fear of god in the viewer.  They involve worlds that are filled with binaries and tension of opposites, evoking dilemmas that continuously haunt us.

The subject matter in Stuckey’s paintings stem from personal visions and dreams.  His day and night world literally collapse onto the canvas. Symbols and characters that reoccur in Stuckey’s dreams are duplicated on several canvases along side Trader Joe receipts, crossed out to-do lists, torn pages from calendars, and news clippings. The artist’s daily habits are laid out and presented as clear as his deepest darkest fears. We laugh at first, but then quickly recognize our own neurosis and connect with the vulnerability.

Stuckey begins with the traditional medium of oil paint on canvas and builds up each painting using paper, oil stick, gesso and occasionally crayons.  On first impression, the characters appear to be childish; gender is demarcated by simple circles for breasts, long or short hair, and (sometimes) scrawled penises. A blonde lady, a set of twins, a mailman, Adam & Eve, a masked thief with a knife, a brown hairy creature – these are all characters that appear repeatedly. The visceral and iconic markings bring to mind painters such as DeBuffet, Basquiat or Dunham. Stuckey pulls the viewer in with energy and sense of humor – and his titles make sure you’re in on the joke. 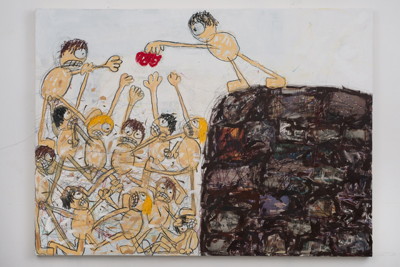 In the painting fuck you Fuck You FUCK YOU figures are shoved within the constraints of the canvas, all clawing at each other for a crimson object dangling above them from the hand of a lone, taunting figure. This single figure stands on top of a brown mound constructed from oil paint and newspaper clippings documenting recent flood images. The precarious mound has been built on destruction, much like greed and desire.  Which begs the question, are we condemned to the same fate as the doomed figures in Bosch’s Garden of Earthly Delights?

During the past decade Stuckey’s subject matter has touched on images of World War Two airplanes engaged in perpetual dog fights and mummies roaming through post-apocalyptic landscapes. Recent exhibitions include a solo show at Strand On Volta in Washington, D.C.; a group exhibition at Cell Project Space in London, England and a solo show at Abel, Raum Fur Neue Kunst in Berlin, Germany.

Little kids can enjoy their first live theater / musical experience this Summer as Storybook Theatre presents a beloved fairytale in both English and Spanish. Admission will be FREE! Pictured – the Little Red...