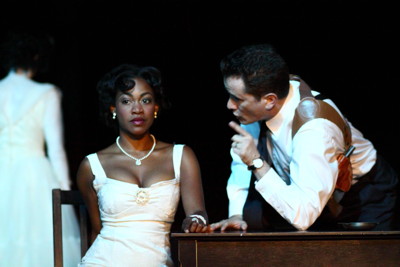 My first review this week for the LA Weekly is of David J’s spooky musical play about the gruesome Black Dahlia murder,

The Chanteuse and the Devil’s Muse,

now playing at the Bootleg Theatre.

Employing an elegant blend of narrative, song, visual projection and modern dance, artist David J explores a gruesome and legendary mystery with his creepy musical play. One of Los Angeles’ most notorious, unsolved crimes occurred early 1947 when the disfigured remains of a young wanna-be actress named Elizabeth Short were found in a vacant city lot.

Attempting to shed new light on the ‘Black Dahlia’ murder with his brief and imaginative theatrical staging, David J intersperses his music with meandering scenes of a police interrogation. The former Goth rocker uses a previously composed song cycle as the framework for his plotline centered around jazz singer Madi Comfort (Daniele Watts), whose paramour, George Hodell, was one of the prime suspects in Short’s sadistic murder.

The silhouettes of the three musicians – David J on vocals and guitar, his co-composer Ego Plum on keyboards, drums and backing vocals and Ysanne Spevack on strings – can be glimpsed as they perform on a scaffolding tower behind a scrim. Onto this screen are projected dreamy, surreal visuals, as well as images of the tragic Ms. Short. There’s even a screened excerpt from the noir movie Kiss Me Deadly, which occupies a substantial chunk of the one act play’s lean 50 minute running time.

A conspicuously low budget means that a strobe-lit dance sequence, in which two dancers portray the severed, mutilated corpse, isn’t nearly as macabre as intended (we should be horrified when the two halves separate). Best of all is the Butoh dance sequence brilliantly performed throughout by Vangeline. Dressed in white tulle like a demented ballerina-bride, with blackened eyes, powdered skin and a grotesque grimace, she embodies the tormented spirit of Elizabeth Short, whose lingering presence slowly builds to a cathartic climax. When Daniele Watts as Ms. Comfort steps up to the mic, she gives a breathtaking rendition of a torchy blues song.

The narrative is weak, but the spectacle is worthwhile.

The Chanteuse and the Devil’s Muse — David J’s speculation on the Black Dahlia murder.