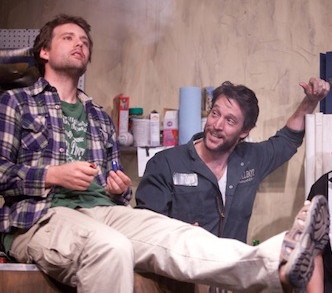 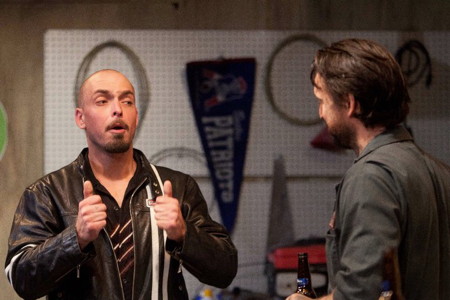 John Pollono’s smash hit play has been extended multiple times, and is now being staged in partnership with Katselas Theatre Company at the Beverly Hills Playhouse.

To read my interview with playwright John Pollono, go here.

Here follows my review, first published earlier this year in the LA Weekly:

Staged by Rogue Machine at the Beverly Hills Playhouse, the grungy set (beautifully realized by David Mauer) is an authentic-looking car mechanic’s workshop.

When a trio of longtime mates from Manchester, New Hampshire get together for some heavy drinking in Frank’s workshop, they reminisce about old times and chat about women, the internet and the virtues of social networking.

The pals, confident Frank (John Pollono), ladies man Swaino (Donnie Smith) and nervy guy Packie (Michael Redfield) indulge in trading insults and mocking digs as they chew the fat. Inappropriate comments, harsh words and hasty apologies are exchanged, but nobody’s sure why Frank is busting out the good whiskey. A young college kid (Josh Helman) arrives to do a quiet drug deal with Frank and all of a sudden the scene erupts into terrifying violence.

Pollono’s script is an exquisitely modulated gem of a play, gripping the viewer with a storyline that is both shocking and sobering with its commentary on the ramifications of modern interactions in the technological age.

Director Andrew Block extracts such realistic performances from his cast that we almost forget we are watching a play, as the appalling action unfolds mere inches away.