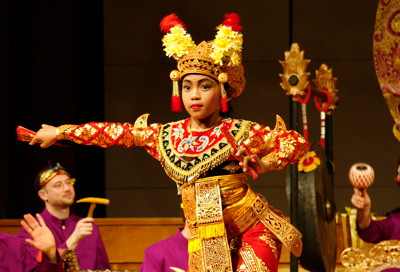 The Fifth World Festival of Sacred Music (WFSM) will feature an astonishing 832 Artists who will be performing in thirty-two events devoted to sacred music and dance. The Festival’s intention is to promote Peace, Tolerance and Universal Responsibility.

For 16 days and nights from October 1 through 16, 2011, WFSM will fill L.A.’s historic theaters, churches, temples and public spaces with thirty-two performances featuring local and international artists with disciplines ranging from sacred traditional music to contemporary dance.  Of the artists and groups performing, about half are making their festival debut.  For more information on WFSM, please visit their official site.

The Festival program reflects concerns of peace, unity and environmental stewardship.   The opening event, Honoring the Sea, on Saturday, October 1 at Santa Monica Beach, is a WFSM tradition that celebrates the shared resource of our oceans and importance of its spiritual meaning.  The gala concert, Water Is Rising, on Saturday, October 15 at Royce Hall at UCLA, presents performances from three Pacific Island nations (Kiribati, Tokelau, Tuvalu) that are threatened by the advance of global warming.

The 1999 WFSM was initiated by His Holiness the Dalai Lama to mark the millennium with peace, cultural understanding and tolerance.  Since its inception, the Festival has continued to promote intercultural and interfaith exchange among the diverse communities of Los Angeles, providing an opportunity for people to come together and build meaningful relationships.

“This year’s festival makes the natural step to expand on our theme of peace, tolerance and universal responsibility,” said Festival Director Judy Mitoma.  “We expand our theme to include our concern for the environment.  Without better stewardship of our planet, there will be no peace on earth.  People are being displaced and cultures will be lost.  All of this year’s Festival artists are committed to the international call to action.” 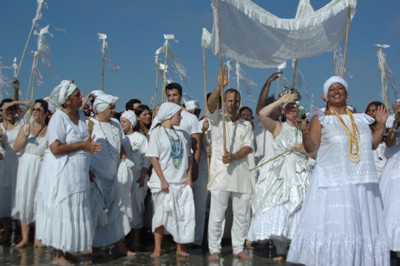 “Honoring the Sea” and “Water is Rising” events will bookend the Festival.

In partnership with the City of Santa Monica and Heal the Bay, over three hundred artists present sacred traditions from seven lineages of world cultures on Santa Monica Beach (at Dorothy Green Park), Saturday, October 1 at 3:00 pm.

The opening procession includes La Canada High School Marching Band; Palau Keali’i O Nalani and Halau O Lilinoe; Swing Brazil Tribe with Viver Brasil, Capoeira Batuque, Seara de Caridade do Cabolo Tupinamba and the Elders of the Diaspora; Senshin Buddhist Temple’s Kinnara Taiko; Agape Choir; and Remo Drum Circle.  Playing a central role is the Ti’at Society as they paddle their traditional canoe beyond the ocean’s breakwaters carrying offerings and sacred blessings to the four corners of the Earth.  This event is free to the public.

Water is Rising brings together 36 artists from the smallest countries in the world (Kiribati-pop.100,000; Tokelau-pop. 1,500; Tuvalu-pop. 12,000) for the first time in the U.S. on Saturday, October 15 at UCLA Royce Hall.  As highlighted in the Copenhagen UN Climate Change Conference of 2009, these Pacific atolls are at the front lines of global warming. With elevations of only 3-5 meters above the sea, they risk becoming the first cultures on earth to be submerged by rising sea levels.

The groups present a program of new songs and dances that express their deep connections to nature, their ancestral past, their feelings about global warming, and the desire that the world not overlook them.  The beauty, vitality and joy of their performance conveys a message of hope and faith for the future despite their concerns about global warming.  The use of projections (with English supertitles) will provide images of their way of life, family, church, the ocean and the lagoon.  The performance is meant to inspire audience and artists alike to be better stewards of our shared planet.

This is a ticketed Event.

Water is Rising, three years in the making, is curated by Judy Mitoma, Director, UCLA Center for Intercultural Performance and UCLA Emeritus Professor of the World Arts and Cultures Department.  After the world premiere performance at Royce Hall, this project will proceed on a 14-city tour of the U.S.  A project of UCLA Center for Intercultural Performance in collaboration with the Foundation for World Arts and EarthWays Foundation, Water is Rising is presented in partnership with the UCLA Institute of the Environment and Sustainability.  Joining science, environmental studies, Pacific Island studies and performance, artists will conduct over 40 educational and outreach programs for all ages – K-12, university students, and adults.  For more information on Water is Rising, the countries represented and issues related to climate changes, please visit their official site.

Groundswell – Choreographer Kristen Smiarowski and composer Robert Een lead a large cast of dancers, instrumentalists and vocalists in a site-specific piece that celebrates the Ballona wetlands.  Saturday, October 8 at 7:00 am and 8:00 am, Ballona Freshwater Marsh, Playa del Rey. Free event.

Samba Society explores the interplay between rural and urban; music and dance; and sacred and secular practices that lie at the heart of Brazilian samba culture entitled Partido Alto-Astral: An Evening of Spiritual Sambas.  (Oct. 6 at 8:00 pm.  Madrid Theatre, Canoga Park)  Ticketed event.

South Pacific fusion ensemble Te Vaka delivers a kaleidoscopic array of Pacific flavors in a genre of its own.  (Oct. 9 at 7:00 pm.

The Ti’at Society leadsprayerful offerings of song and dance at the sacred grounds of Puvungna – the place of creation and emergence of the Tongva people.  (Oct. 16 at 10:00 am.  Cal State Long Beach, Long Beach)  Free event.

More about the 2011 World Festival of Sacred Music

The 2011 World Festival of Sacred Music is a project of Foundation for World Arts and UCLA Center for Intercultural Performance. This event would not have been made possible without generous contributions from: The James Irvine Foundation; Ford Foundation; National Endowment for the Arts; Department of Cultural Affairs, City of Los Angeles; Los Angeles County Arts Commission; City of Santa Monica, Cultural Affairs Division; His Highness Prince Aga Khan Shia Imami Ismaili Council for the Western United States; Heal the Bay; and EarthWays Foundation.  The Festival is also made possible through the shared commitment of those who contribute by their in-kind assistance.  Artists, organizers, and the audience realize the community-building intention of the Festival through their participation.

Photo Credits: “courtesy of the 2011 World Festival of Sacred Music”

For more information and a complete list of events visit their official site.