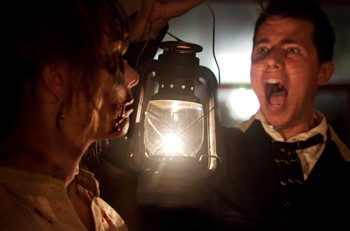 Wicked Lit returns to the graveyard for Hallowe’en 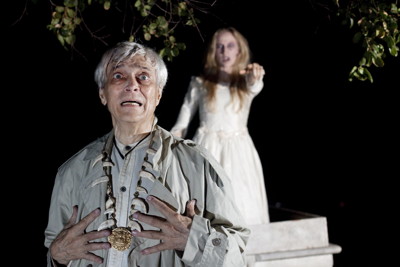 Wicked Lit audiences will experience three short plays as they are led through the grounds of the mausoleum and cemetery by a Storyguide. Separate tickets will give patrons access to either Production A (The Chimes, The Unnamable and The Cask of Amontillado) or Production B (The Body Snatcher, Casting the Runes, and A Ghost Story).

Please be advised – as this is a walking show, patrons must be able to comfortably walk a minimum of 1,000 paces and climb stairs in order to experience these productions.

Production A (October 21-November 5, 2011) will consist of a remount of three plays that the theatre company produced as part of last year’s engagement: Charles Dickens’ The Chimes, H.P. Lovecraft’s The Unnamable and Edgar Allan Poe’s The Cask of Amontillado.

Production B (October 27-November 6, 2011) will include three Wicked Lit plays that have never been staged at Mountain View: Robert Louis Stevenson’s The Body Snatcher, M.R. James’ Casting the Runes, and Mark Twain’s A Ghost Story.

Josephson, Rack and Millet have written and will direct all six adaptations. “This fall is going to be unbelievable,” says Rack. Added Millet, “Many couples and families that have attended our shows over the years have told us that Wicked Lit has become their new annual Halloween tradition.”

Added Josephson, “From the feedback that we have received from surveys and talking directly to past attendees, patrons who saw last year’s show are almost as excited to see that same show again as they are to see the new production.” 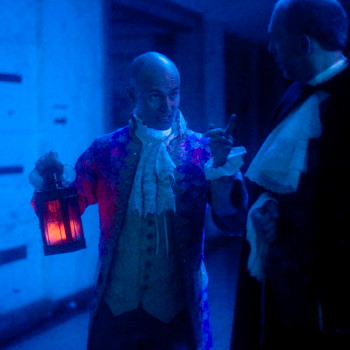 The mission of Unbound Productions, the theatre company that produces Wicked Lit as well as the newly launched History Lit, is to create new theatrical adaptations of classic literature and produce them in non-traditional venues.

Visit their official site for complete pricing and scheduling details.  Wicked Lit is also on Facebook.

Edgar Allan Poe’s The Cask of Amontillado
Adapted by Paul Millet, Directed by Jonathan Josephson
Journey to the catacombs for a stirring retelling of Poe’s classic tale of madness, unrequited love, and deception.

H. P. Lovecraft’s The Unnamable
Adapted and Directed by Jeff G. Rack
Two men – one a dealer in ancient artifacts, the other a follower of the occult – enter a graveyard on an ominous evening. If all goes according to plan, only one will return home.
Charles Dickens’ The Chimes
Adapted by Jonathan Josephson, Directed by Paul Millet
In the spirit of A Christmas Carol (but with the bite of a horror story), The Chimes is a haunting tale of renewal, goblins, and the ties that bind.

Robert Louis Stevenson’s The Body Snatcher
Adapted and Directed by Paul Millet
In Nineteenth Century Scotland, Mary Fettes plans to become the first female medical student at the University of Edinburgh – but horrors await that will change her forever.

M.R. James’ Casting the Runes
Adapted and Directed by Jeff G. Rack
A publisher rejects a manuscript from a proclaimed practitioner of the occult, unleashing a supernatural fury that threatens to take his life — unless he can reverse the spell.

Mark Twain’s A Ghost Story
Adapted and Directed by Jonathan Josephson
A college student finds himself with two flat tires and nowhere to go but an old, creaky, abandoned hotel.  Hilarity ensues.

Founded by Jonathan Josephson, Paul Millet, and Jeff G. Rack, the mission of Unbound Productions is to create new adaptations of classic literature as a way of reimagining great stories for new audiences. With its flagship theatre festival Wicked Lit, and its newest project History Lit, Unbound takes pride in engaging in ambitious storytelling and creating surprising and impactful theatrical experiences.

The scope of Wicked Lit is to create dynamic new adaptations of classic horror literature. Since 2008, Wicked Lit has presented over 75 staged play readings of Wicked Lit plays at theatres, libraries, schools, festivals, and special events all over Southern California and has proudly worked with communities throughout Los Angeles, Orange, and Ventura counties. Wicked Lit launched its inaugural production in 2009 at the haunted Greystone Mansion in Beverly Hills. The second annual Wicked Lit production took place at Mountain View Mausoleum and Cemetery in Altadena.