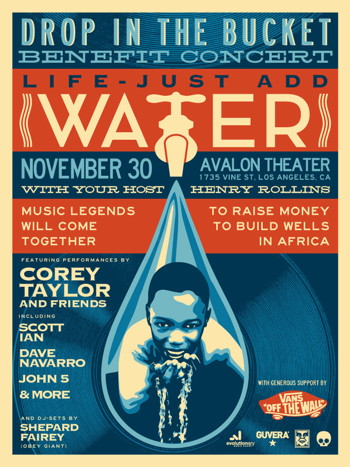 For one night only, an assortment of rock legends will come together to raise money to build water wells in troubled south Sudan.

This is an all ages event.

It’s all going down at the legendary Avalon Theater in Hollywood, where Slipknot/Stone Sour’s frontman Corey Taylor, Dave Navarro, Dave Lombardo of Slayer, Anthrax’s Scott Ian, John 5 and members of Rob Zombie’s band along with host Henry Rollins will perform at a star-studded benefit concert for Drop In The Bucket, a Los Angeles and Gulu, Uganda-based non-profit that builds water wells and sanitation systems at large rural schools in sub-Saharan Africa.

Legendary artist Shepard Fairey, who designed the exclusive poster for the event, will be a guest DJ, and Kate Flannery of The Office will deliver a hilarious musical comedy routine with her ironic lounge act, The Lampshades. Many more surprises to be announced.

Taylor, hot off his recent book tour for the NY Times bestseller Seven Deadly Sins, is currently in the middle of a very successful and almost entirely sold out acoustic tour, had this to say;

“In a time when money is suspect, and politics looks a lot like schoolyard bullying, people forget that there are far greater issues going on in the world. One of which is the fact that millions of people live without water on a daily basis when we as Americans treat it like used tissue paper. It’s only common sense to think that if I can do something to not only help, but also raise awareness, then that’s exactly what I’m going to do. Drop in the Bucket is one of the most important and selfless causes I have ever had the privilege to be a part of. And I can only hope that I do some good for it. And to be able to do that by putting on an awesome show with friends like Roy Mayorga, Scott Ian and John 5 just shows how good this business can be sometimes!”

Rollins, a renowned musician, author and punk rock icon, has worked closely with Drop In The Bucket, traveling to Africa last year to see its work on the ground first-hand.

“Drop In The Bucket is trying to make things better,” says Rollins. “There’s no profit incentive here. It’s only about getting people to water and keeping them alive and healthy.”

Funds raised at the event will be used to expand Drop In The Bucket’s vital programs into the northern region of Bahr el Ghazal region of South Sudan. This area is on the verge of a major humanitarian crisis due to the sudden influx of returnees coming from North Sudan following South Sudan’s recent independence.

Tickets will be available for pre-sale purchase at $25 through Ticketmaster here and at the door for an increased price, with availability pending.

Special thanks to the always awesome sponsors Vans, Guvera, Revolver and The Avalon for coming on to support this event.

Drop In The Bucket believes we can help create a world in which children are safe, healthy, educated and free from fear. And we believe that the key to achieving those ends is clean water and sanitation. For more information on Drop In The Bucket, please visit their official site.