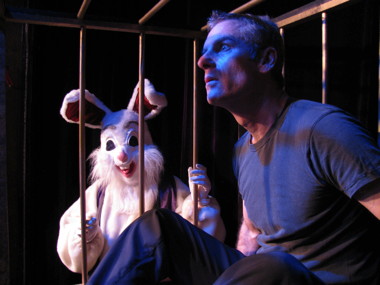 Soak up one or more of the many free theatrical events on offer during the Experience NoHo festival, taking place November 12th, from 12pm – 8pm.

This day-long multi-arts festival and celebration (did I mention it was free?!) will feature live theater, dance, music, art, and food, all being staged within the heart of the booming NoHo Arts District on Lankershim Blvd. between Otsego Ave. and Weddington St.

Experience NoHo is part festival and part arts walk.  A main stage area for music will be located at the intersection of Lankershim Blvd. and Weddington St., while a dance stage at Lankershim Blvd. and Otsego Ave. will anchor the festival.  Art will be everywhere – from public art stations inviting patrons to create their own art, to gallery installations.  NoHo theatres will offer performances and classes during festival hours. To top it off, there will be incredible discounts and offerings from local restaurants and retailers.

Antaeus Classical Theatre Company @ Deaf West Theatre:  Join some of the actors from the current critically acclaimed production, Peace In Our Time, singing the  Noël Coward songs, an afternoon cabaret of Coward’s war-time music as featured in their our show. You can read my recent review here.

Group Rep Theatre [email protected] J.E.T. Studios:  Put On Your Shorts – Best of the songs and one-act shows by the Group Rep that have recently enjoyed successful performances at the Lonny Chapman Theatre.  This theatre, of course, is the home to full-length plays, as well as shorter one act plays, songs and sketches.  The common denominator for all these forms is story.  They all use character to tell some kind of tale.   The Group Rep is presenting ten of these short pieces to demonstrate a wide range of theatre, including seven theatre songs and four short plays featuring the talents of members: Laurie Morgan, Henry Holden, Linda Alznauer, Lloyd Pedersen, Lareen Faye, Colette Rosario, Irene Chapman and Diana Martin.  Wizard performer and musician Wayland Pickard will accompany the singers and lend his own brand of genius to the proceedings.

J.E.T. Studios:  This new theatre facility serves as host to the Group Rep’s PUT ON YOUR SHORTS; Free Acting Class with The Kristofer McNeely Acting Studio, a unique, intensive, in‐depth acting class; and Zombie Joe’s Underground’s Takin’ A Break From Sex created and performed by Andy and Joleen Mullins.

NoHo Arts Center:  That’s Amore! An American Italian Songbook, a musical autobiographical revue, starring Gilmore Rizzo, is filled with fun music, laughs and stories about a boy growing up in an Italian-American household when music was king and so was the food!

The Road Theatre Company:  Smorgasbord, a one-woman cooking show, about a woman who ‘unravels’ while demonstrating a recipe, written and performed by Janet Chamberlain; excerpts from Smoke and Mirrors, a magic show with a story, a fantastical journey featuring Albie Selznick and Bettina Zacar;  Free Intentional Cold Reading Workshop for actors ages 8 + with award-winning director and top acting coach Loren E. Chadima; Playing Doctor, a coming of age story about a young girl’s struggle to care for her ill parent, her early sexual awakening, and lots of lots of food, featuring Lauren Clark.

Secret Rose Theatre:  Put the Kettle on Productions presents Bob Cratchit And Mr. Tightwad, a holiday musical with a twist, a version of the classic story with an eclectic mix of contemporary songs and extraordinary adventure just right for you and your family;  DHM & Angry Amish Productions present songs from the hit show currently running at the Secret Rose Theatre, Don’t Hug Me, I’m Pregnant, a musical comedy about an 8½ month pregnant lady who goes into labor in a Minnesota Bar during a snowstorm. Featuring: Greg Barnett, Rebekah Dunn, Bert Emmett, Patrick Foley & Natalie Lander.

About the NoHo Arts District:

The NoHo Arts District has become one of Los Angeles’s trendiest neighborhoods. Just think of it as an urban cocktail of bohemian and yuppie with a twist of edginess. Itʼs a hip enclave of all things artistic. Within a one-square mile, NoHo is home to more than 20 live theaters, music recording studios, art galleries, dance studios, boutique clothing stores and gourmet restaurants. Within the heart of the NoHo Arts District you will also find The Academy of Television Arts and Sciences, The Art Institute of California – Hollywood and the Los Angeles home of The Knitting Factory Music at the The Federal Bar. With easy access from METRO red and orange lines, NoHo is your one-stop arts & entertainment destination.

WHERE: In the NoHo Arts District, spanning Lankershim Blvd. from Chandler Blvd. to Camarillo Blvd.; Bakman Ave. to Vineland Ave.

ALL EVENTS ARE FREE! (cheap!)