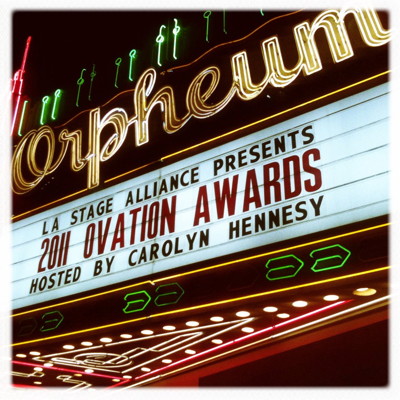 The LA STAGE Alliance Ovation Awards, celebrating theatrical excellence and achievement during the 2010-2011 season, were presented on Monday, November 14, 2011 at the historic and glamorous Orpheum Theatre, in Downtown Los Angeles.

Biggest winners of the evening were the members of the Troubadour Theater Company, leading the pack with five awards. The Troubadour production A Wither’s Tale, a mash-up of Shakespeare’s Winter’s Tale with the soulful music of Bill Withers, took home four of those awards – the most for any single production mentioned last night. Two Troubies, Artistic Director Matt Walker and leading comedienne Beth Kennedy, garnered more Ovations than any other individuals, with Walker winning or sharing in four Ovations and Kennedy in three. Troubadour won the most coveted Ovation — best season – for its lineup of A Wither’s Tale, The First Jo-el and Fleetwood Macbeth.

The boisterous Troubies were followed by Center Theatre Group with four Ovations, including three for Venice, the Othello-derived musical at the Kirk Douglas Theatre, and one for Leap of Faith at the Ahmanson Theatre.

The marvelous Rogue Machine gained three awards, all for its stunning production of John Pollono’s Small Engine Repair, which was named best play in an intimate theater.

Stefan Marks won the original play award for Crooked Arrow Productions Hello, and the musical writing honors went to William Norris, Stuart Gordon and Dennis Paoli for their book of Re-Animator: The Musical and Gregory Nabours for the lyrics and music of The Trouble With Words.

For a complete list of the winners, go here.

LA STAGE Alliance (LASA), a non-profit organization empowering artists and engaging audiences since 1975, is dedicated to building awareness, appreciation, and support for the performing arts in Greater Los Angeles by strengthening the sector through community building, collaborative marketing, audience engagement, professional development, and advocacy. LASA serves over 900 arts organizations annually, including over 450 dues-paying member professional, educational, and community based producing and presenting performing arts organizations in the counties of Los Angeles, Orange, Riverside, San Bernardino, Santa Barbara, and Ventura. LASA’s constituents operate in intimate sized venues (99 seats or less), mid-sized venues (100-499 seats), and in large venues (500+ seats), and include independent producers, educational groups, and social service organizations that have a performing arts component. Additionally, LASA directly serves over 50,000 diverse local, regional, national, and international performing arts patrons and, indirectly, three million unique patron households by conducting research on their behavior and buying habits. Providing access to the performing arts for patrons and access to resources for organizations has been our focus for 35 years.

The Ovation Awards are tabulated by Green Hasson Janks.