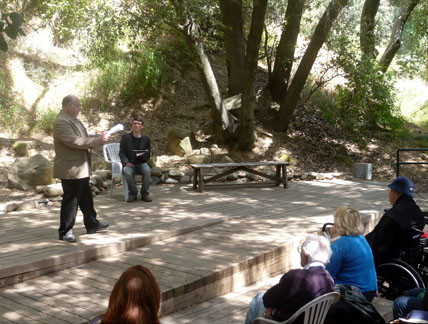 Theatricum Botanicum’s new play development program, Botanicum Seedlings, continues to inspire growth by reaching out to a mix of emerging and award-winning playwrights for SeedlingsFest, its second festival of new plays where they present two days of new plays by a fresh crop of playwrights.

This Festival of (short) playreadings features two days of plays written on a theme  –  Certified Organic – expressly for this event, giving Theatricum company members and audiences the opportunity to sample fresh new works that are 100% natural and pesticide-free  – and enjoy seasonal gourmet treats and live music as part of the package.

“It’s very gratifying that Theatricum is able to provide a creative and safe nurturing environment for today’s playwrights,” says Theatricum managing director Delphine Frost. “Through Seedlings, we can also give back to the community by allowing local audiences to see a play at its earliest stages and appreciate first-hand what writers do: provide the food that feeds other artists.”

This year’s group of writers includes playwrights new to Seedlings as well as artists who generally work behind the scenes in Topanga, including Seedlings literary manager Julie Retzlaff and Theatricum playwright-in-residence Jennie Webb.

The Certified Organic plays on both performance dates are:

The Will Geer Theatricum Botanicum

(midway between Pacific Coast Highway and the Ventura freeway)

OTHER:   The theater is outdoors; dress warmly, and, in case of inclement weather, please call for alternate performance times.

SeedlingsFest features the work of five directors and an ensemble cast featuring familiar members of Theatricum’s company and some new faces. The “Certified Organic” directors are Jen Bloom, who developed the Performing Arts Program at the L.A. Natural History Museum, is co-artistic director of Santa Monica Rep, and has extensive credits on the East Coast and in Los Angeles; Ella Martin, whose work as a director has been featured by PianoFight LA, California International Theatre Festival and Theatre Mab Town Hall (co-founder and artistic director); Amanda McRaven, a Fulbright scholar whose productions have received critical acclaim in Los Angeles, San Francisco, New York, Virginia (at the American Shakespeare Center) and Wellington, New Zealand; Annie Saunders, who has worked as a director in London at the Charing Cross Theatre, Queen Mary University and Etcetera Theatre and at LA’s Lyric Hyperion, and who recently launched her own site-specific company, Wilderness; and Becca Wolff, whose past theater work includes The Public Theater (NYC), Trinity Repertory Theatre, Shakespeare Santa Cruz and Yale Repertory Theatre, among other venues, as well as “Usher,” Best Musical of the 2008 NY International Fringe Festival.

Initiated in 2002, the Botanicum Seedlings series acts as an adjunct to the Theatricum Botanicum’s Summer Repertory Season, mounting spring playreadings as the season opens, and culminating after the season winds down with a fall workshop production or playreadings.  Throughout the calendar year, plays are also selected to receive GreenReads, providing an unrehearsed, fresh look at scripts in various stages of development.