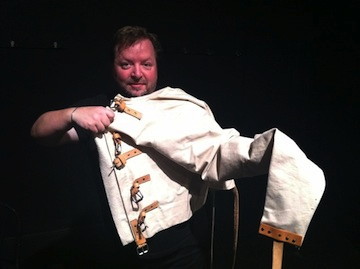 Shaky home movie footage of a small town, as viewed from the passenger seat of a car, is projected before our narrator walks up to a music stand with his notes. Ominously hanging upstage is a straightjacket.

At first David Michael Taylor’s reminiscences of growing up (and desperately trying to escape) an abusive home life in dreary Moundsville, West Virginia reads like a speedily-delivered lecture dotted with stand-up comedy punchlines.

Taylor’s comedic timing and confessional style becomes seductively compelling, eventually drawing you in with his wry, ironic observations and sparks of mild sarcasm. He gets you laughing harder than you’d imagine at a guy who flirted with insanity.