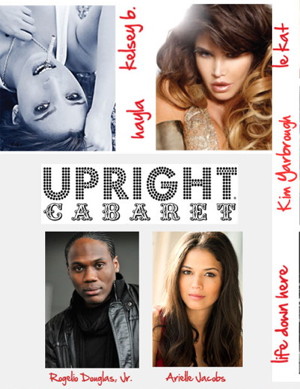 For the third consecutive year, Chris Isaacson Presents and Upright Cabaret have announced a sizzling one-performance-only musical event on the mainstage at the 2012 Christopher Street West Los Angeles Pride Festival, on Saturday, June 9, 2012 at 8pm that is not to be missed!

Scheduled to perform just prior to the event is pop icon and Pride headliner Belinda Carlisle and Rogelio Douglas, Jr. (Broadway’s In the Heights and The Little Mermaid), Arielle Jacobs (In the Heights), sexy Lesli Margherita (Olivier Award-winner for Zorro, The Musical), Carla Renata (CW’s Hart of Dixie, Broadway’s Avenue Q and The Life), who will perform a tribute to Donna Summer, and Jake Simpson (Star Search Grand Champion), who will debut a brand new song. The musical director is Davy Nathan (Toni Braxton, Patti LaBelle), and the Upright Cabaret Broadway Choir will perform “Seasons of Love” (Rent) with the entire cast for the show’s finale.

The whole show is governed by superlative musical direction from Davy Nathan.

Christopher Street West Association, Inc., a non-profit organization within the Greater Los Angeles area, is committed to the goals of human rights, education, outreach and better understanding within the lesbian, gay, bisexual and transgender communities. CSW was formed in 1970, producing first Pride parade in the world, which celebrated the 1969 Stonewall Rebellion in New York City. Christopher Street West was incorporated in 1976. Chris Isaacson Presents has created, produced and promoted over 450 events since the company was formed in 2004. From small clubs to major theatres, Isaacson has produced some of the most influential stars of this generation including Adam Lambert (American Idol), Lea Michele (Glee, Spring Awakening), Neil Patrick Harris (CBS’s How I Met Your Mother), three-time Grammy nominee Taylor Dayne, Grammy winner Paula Cole, and more.

Isaacson is also founder of LA’s renowned Upright Cabaret, which has been redefining the cabaret milieu for a new generation of audiences since 2005.

The Upright Cabaret event at the 2012 CSW Los Angeles Pride Festival will take place on Saturday, June 9 at 8pm in the newly renovated West Hollywood Park.

Festival admission is $20.00, and entrance is at the intersection of Santa Monica and San Vicente Boulevards.

For further details and to purchase tickets, call the Pride info line at (323) 969-8302 or visit the official site.

For more info on Upright Cabaret, visit their site.