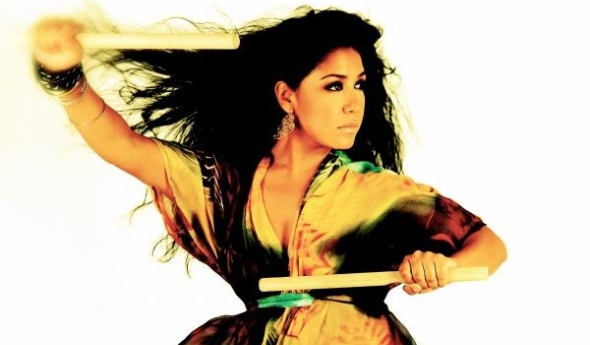 The second annual Beat the Drum Festival is happening Sunday, July 15, 2012 at the Ford Amphitheatre. Presented by ARTScorpsLA/ACLA Emerging Producers, Beat the Drum: East Los Meets West Los is a fun outing for the family. You can picnic at the Ford plus there will be plenty of vendors and fun demonstrations.

Doors will open at 6:00pm for picnicking, drum technique demonstrations from South Mexican and Central American traditions, live screen printing and painting, and dancing by the Capoeira Collective in the Ford Theatre Plaza.

“Beat the Drum is designed to capture the many rhythms of drum life as the LA experience,” says Festival Artistic Director Tricia Ward, “East and West traditions of jazz and rock drumming, Bomba, Taiko, and Pan Latin, all together in celebration for one night, reveal the universality of the drumbeat as a rhythmic linkage to the human heartbeat.”    The festival was first staged last year at the Craft & Folk Art Museum.  Festival performers are chosen to represent the universal fusion of traditional practice with artful new styles, to represent the cultural essence of Los Angeles, one of the largest melting pots in the world.  Also performing at the festival are Emcee Mayda Del Valle (poetry slam champion), DJ Reyes Rodriguez (world music), JD Wolfrobe (urban ethnic fusion) and Bizzart (grime, hip hop, free jazz).  Beat the Drum 2012 also celebrates the 20th anniversary of ARTScorpsLA/ACLA, teaching life skills through the arts and linking a healthy humanity to a healthy environment.  The event is the most ambitious outdoor presentation ever hosted by ACLA in its 20 year history.

Atabey – Atabey represents a continuous struggle of Afro-Boricua people to maintain and promote their culture through drumming, dance and song. Bomba music is a tradition that was brought to Puerto Rico from Africa by the slaves who worked in sugar cane plantations.  The music represents a mixture of religious, cultural, and poverty dynamics within struggles of life and love.

Capoeira Collective – The Capoeira Collective is comprised of Capoeiristas, who have come together to share and build through their practice, a Brazilian martial art that combines elements of dance and music.  They are all practitioners of Angola, the traditional style of Capoeira.  The name Angola dates back to the beginning of slavery in Brazil, when Africans, taken to Luanda to be shipped to the Americas, were called in Brazil “black people from Angola,” regardless of their nationality.  Each Capoeirista has spent years studying and honing their craft.  The Capoeira music they play is as important as the dance, actually influencing the movements of the game.  Each song has its own relevance and historical context.  The collective plays out of love and for the world.  CAVA – In 2006, Claudia Gonzalez-Tenorio re-emerged as CAVA, a project that continued the evolution of Latin music in Los Angeles.  Her voice communicates a strong-willed feminine energy that is simultaneously sultry and maternal.  Gonzalez-Tenorio is featured on cajon, Jarana, and Japanese Taiko, seemlessly blending traditional Afro-Cuban Son, Cumbia, ska, salsa and funk.  The ensemble features Walter Miranda (keyboards and bass), who is best known for his eclectic arrangements in the short-lived, but long remembered ska group he co-founded in the 90s, Yeska.  Throughout his career, he has been featured by the Beastie Boys, Money Mark, Sublime, and Mexico’s Plastilina Mosh.  On drums, Adam Topol presents himself on a hybrid timbales/rock kit.

East LA Taiko – East LA Taiko marries its Latin roots with Afro-Cuban rhythms, ska-punk riffs and driving raw Taiko beats, for a fiery eclectic blend of world rhythm that travels the globe and takes you right into the heart of culturally diverse Los Angeles.  Featuring Fredo Ortiz (drums/timbales, Taiko), who is best known for touring with the Beastie Boys, and Taiko drummer Maceo Hernandez (the “Demon Drummer of East LA”).  East LA Taiko has performed with Ozomatli, Los Lobos, CAVA, and Quetzal at venues such as the Japanese American National Museum, The Mark Taper Forum, and the UCLA Asia Institute.

Mayda Del Valle, Emcee – Mayda Del Valle has been described by the Chicago Sun Times as having, “a way with words.  Sometimes they seem to flutter and roll off her lips.  Other times they burst forth like a comet streaking across a nighttime sky.”  A proud native of the South Side of Chicago, she began performing her own writing while in high school and relocated to New York City after graduating from Williams College with a BA in Art.  One of Del Valle’s first stops was the legendary Nuyorican Poet’s Café.  There she won the 2001 Nuyorican Grand Slam Championship and went on to win the 2001 National Poetry Slam Individual Championship, becoming the first poet from the Nuyorican, the youngest poet, and the first Latino person to win the title.  Soon after, she was chosen to perform on the first season of the Peabody Award Winning HBO series Russell Simmons Presents Def Poetry.  She was also an original cast member and contributing writer of the critically acclaimed, Tony award-winning production of Russell Simmons Def Poetry Jam on Broadway, and toured internationally with the show.  She also toured with Norman Lear’s Declare Yourself Spoken Word Tour, a national, nonprofit, non-partisan campaign created to encourage young voter participation in the 2004 presidential elections.

Reyes Rodriguez, World Music DJ – Reyes Rodriguez is a Los Angeles artist, curator and world music DJ.  Reyes has been the curator of a number of important exhibitions, performance and music events at Tropico de Nopal Gallery Art-Space, a cultural space he founded in 2000.  Three years ago, he started Ecléctica, the first alternative world music night in Boyle Heights at Eastside Luv Wine Bar y Queso.  Currently, he is the DJ and host of Art & Grooves on Radio Sombra.  In 2007, he was featured as part of the annual LA Weekly People 2007 issue that highlighted 100 of the most interesting and influential Angelenos.

ARTScorpsLA/ACLA – Founded in response to the 1992 LA riots, ARTScorpsLA/ACLA (Art, Community, Land, Activism!) is a community-based public art project and land collective built on the belief that every person is a freely creative individual deserving a safe, healthy community in which to express themselves.  The organization is committed to working with youth and families in underserved Los Angeles neighborhoods to transform unused urban land into dynamic neighborhood art parks.  The organization’s two sites include La Tierra de la Culebra Park, a one-acre, stone-terraced oasis in Northeast Los Angeles, and Spiraling Orchard Park just outside of Downtown Los Angeles, both of which serve the surrounding neighborhoods with seasonal and cultural celebrations, educational workshops, and on-the-ground community advocacy.  A sustainable Spiraling Orchard Pavilion, a community center for the next generation, is currently in the planning stages with groundbreaking anticipated for 2013.

Tricia Ward, Artistic Director – Tricia Ward, ARTScorpsLA/ACLA Founder and Beat the Drum Artistic Director, has created various forms of collective public art as a catalytic force for over 30 years, in places as diverse as New York City, Houston, Detroit and Los Angeles.  In 1992, Ward founded La Tierra de la Culebra, a one-acre community youth artpark, encompassing a 500-foot long serpentine sculptural centerpiece that includes an amphitheater, Ziggurat and pond, fruit trees and terraced gardens.  In LA’s overcrowded inner city, the Culebra provides daily activity as well as a place for visits and repose among intergenerational community members.  The artpark was created as part of ARTScorpsLA, now ACLA (Art, Community, Land, Activism!), which also created additional community specific sites: Spiraling Orchard in Temple Beaudry, Studio Chinatown and Francis Avenue Gardens in Koreatown.  Seasonal celebrations have been interdisciplinary offerings at the sites since they were developed.  Origins of Beat the Drum – Ward first conceived of a drum festival a decade ago, as a celebration of universal traditions of the drum.  It was called HEARTBEATS of the 4 Continents, as all drums speak to the body, linking the heart with the rhythmic order of all heartbeats.  As Los Angeles has developed into a place of transnational cultural diaspora, the City of Angels “is” the 4 continents.

Tickets are reasonable with lots of discounts for kids/students/MTA & cyclists.

About the Ford Amphitheatre:

The John Anson Ford Theatres complex is one of the oldest performing arts venues in Los Angeles still in use.  Situated in the Cahuenga Pass, the venue consists of the 1,245-seat Ford Amphitheatre and intimate 87-seat [Inside] the Ford Theatre.  The facility currently hosts nearly 200 diverse dance, music, theater, film and family events each year, a dramatic evolution from its start nearly 90 years ago.  Dedicated to reflecting the diverse cultures of Los Angeles County, the Ford is committed to both artists and audiences; traditional and contemporary works.  With its popular multi-disciplinary performing arts summer season, a series of theatrical works mounted during the winter months, interactive events and community, the Ford has become a hub for the surprising, the unusual and the intriguing.

The Ford Amphitheatre is located just off the 101 Hollywood Freeway across from the Hollywood Bowl and south of Universal Studios.  The grounds open two hours before showtime for picnicking. The Ford offers a number of dining options: a variety of food and beverages is available on site and box dinners for evening events may be ordered in advance.  Patrons are welcome to bring their own food and drink.  The Ford is disabled accessible.  Portable wireless listening devices are available upon request.  On-site, stacked parking costs $5 per vehicle for evening shows.  For evening shows only, FREE non-stacked parking serviced by a FREE shuttle to the Ford, for evening amphitheater performances only, is available at the Universal City Metro Station lot at Lankershim Blvd. and Campo de Cahuenga.  The shuttle, which cycles every 15-20 minutes, stops in the “kiss and ride” area.  Group ticket discounts are available.  For groups of 8 or more, please call 323-769-2147.

This event is part of the Ford Amphitheater 2012 Season; a multi-disciplinary arts series produced by the Los Angeles County Arts Commission in cooperation with Los Angeles County-based arts organizations.  For a complete season schedule, directions to the theater and parking information, log on to their official site here.