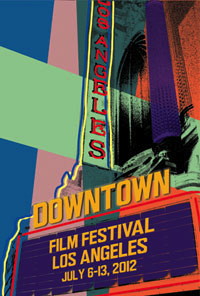 The Downtown Film Festival Los Angeles (DFFLA), a nonprofit organization, has announced its line-up of feature films to be presented during the 8-day event, July 6—13, 2012 in venues throughout downtown L.A, promising an eclectic mix of narratives and documentaries showcase emerging talent.

“The 4th edition of the festival will continue with its tradition of showcasing all types of films that reflect downtown L.A.’s unique cultural diversity and its mission to present authentically independent cinema in the Film Capital of the World,” said Festival Co-Director Henry Priest. “Most of our features are Los Angeles or world premieres, so we’re excited to share with audiences the kinds of films that rock our world.”

Entries to this year’s film festival and its companion New Media Festival L.A., an international exhibition of digital shorts, came from around the globe – from Poland to Pakistan, Paraguay to Poughkeepsie, and virtually everywhere between. New Media Festival L.A. is presented in conjunction with Los Angeles Center for Digital Art (LACDA).

The festival’s Opening Night film will be The Diary of Preston Plummer starring Rumer Willis and Robert Loggia.

The festival’s Closing Night program, the short film line-up and winners of New Media Festival L.A., is yet to be announced.

As in previous years, music documentaries and music-themed narrative features play a prominent role in this year’s feature film selection. “Just Like Being There” captures the world of rock show “gig posters,” tracing their roots back to the Sixties when vinyl ruled and exploring the new generation of visual artists in the contemporary world of digitized downloads.

On the narrative side of music films, “Birds of A Feather” follows the long, comedic tradition of “let’s put on a show” movies about legitimate theater but updates it for these “Glee-ful” times as a group of artistic misfits band together to produce a musical version of Chekhov’s “The Seagull” (no less). On the other hand, “Fuzz Track City” finds its inspiration in electro-rock of the Seventies, providing the soundtrack and plot device for a neo-thriller film noir.

While DFFLA is international in scope, several of the features were shot in downtown Los Angeles including Falling Up, a documentary about a homeless veteran on Skid Row, Fixation, which captures the ‘fixed-gear’ phenomenon in L.A. bike culture, and Getting Up, the dramatic true story of celebrated graffiti artist Tempt One.

Among the narrative films are the Los Angeles premieres of Heathens & Thieves, an Old West action-thriller set in California’s Gold Rush, Carlos Spills The Beans, a comedy about love, jealousy, redemption and cheap diner food, Colfax & 15 in which a young hood trying to keep on the straight and narrow finds himself embroiled in the underworld of his bail bondsman boss, and Life At The Resort, a new twist on the classic romantic comedy genre where a hotel – in this case a posh resort filled with Hollywood types – serves as the vehicle for multiple subplots converging headlong to a happy ending.

Also making their Los Angeles premieres are three character-driven narrative features:  Betty I Am, set in East L.A. where a brother and sister unite, fight and try to make it right in the wake of their father’s suicide; Delusions of Grandeur, about three women struggling with their sexuality and evolving gender roles in Seventies San Francisco, and The Light Of Love, an insanely creative, improvised story about four friends in the L.A. counterculture making a film about their lives (but not really…)

Rounding out the feature documentaries are the Los Angeles premieres of “We Are Legion,” which takes us deep inside the secretive world of Anonymous, the radical ‘hactivist’ collective, and “Beyond Pollution,” which uncovers dramatic new information about what really happened, why and who benefited from the British Petroleum Gulf oil spill, America’s worst environmental disaster.

Past festivals have premiered new films by Spike Lee and Barbara Kopple, showcased features with Paul Newman, Don Cheadle, Guy Pearce and Anna May Wong and have honored Seymour Cassel and John Hawkes with our Independent Film Pioneer Award.

For the complete schedule of feature films, and to buy advance tickets, visit their official site.