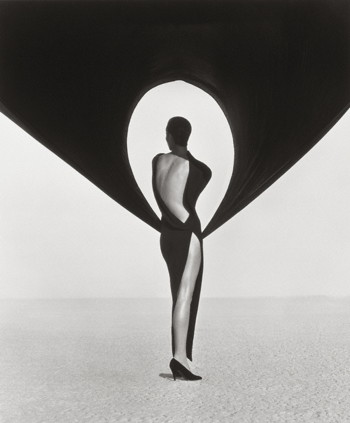 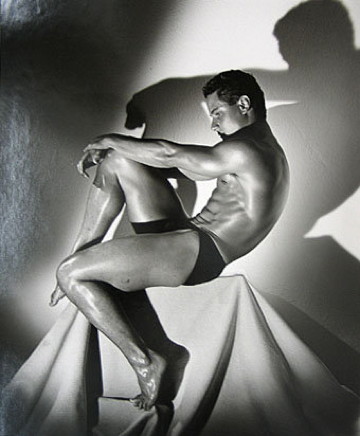 Herb Ritts: L.A. Style, the J. Paul Getty Museum’s current photography exhibition exploring the work of the iconic Los Angeles-based photographer, has been extended through September 2, 2012 to coincide with Labor Day weekend. To date, the popular exhibition’s weekly average attendance is higher than previous photography shows at the Getty.

Complementing the exhibition is a new 12-minute documentary film on Herb Ritts, produced by the exhibition’s sponsor, Lincoln. The film features interviews and insights from those who worked with and were photographed by Ritts, including supermodels Naomi Campbell and Tatjana Patitz, musician Chris Isaak, Vogue photo editor Ivan Shaw and celebrity stylist Sally Herschberger, among others. The film is now screening in one of the Museum’s two Orientation Theaters in the Entrance Hall on a continuous basis through the end of the exhibition.

This exhibition is being staged in conjunction with Portraits of Renown: Photography and the Cult of Celebrity, also on view at the J. Paul Getty Museum at the Getty Center, April 3–August 26, 2012,

Herb Ritts (American, 1952–2002) was a Los Angeles-based photographer who earned an international reputation for his unique images of fashion models, nudes and celebrities.  From the late 1970s until his untimely death from AIDS in 2002, Ritts’ ability to create photographs that successfully bridged the gap between art and commerce was not only a testament to the power of his imagination and technical skill but also marked the synergy between art, popular culture, and business that followed in the wake of the Pop Art movement of the 1960s and 1970s.

On view at the J. Paul Getty Museum at the Getty Center, April 3–September 2, 2012, Herb Ritts: L.A. Style explores Ritts’ extensive photographic career, including a selection of renowned and previously unpublished photographs, as well as his directorial projects. A major portion of the works in the exhibition was newly acquired by the Getty Museum through purchase and in the form of a generous gift from the Herb Ritts Foundation.

Selections from this acquisition will be featured in an exhibition opening at the Getty Center in April 2012. Other highlights from the acquisition are Greg Louganis, Hollywood (1985), a portrait of the American Olympic diver; Wrapped Torso, Los Angeles (1988), which shows off a dress by Japanese designer Issey Mikaye; Stephanie, Cindy, Christy, Tatjana, Naomi, Hollywood (1989), an iconic image that has come to define the era of the Supermodel; Veiled Dress, El Mirage (1990), a photograph first used in Versace’s couture catalogue, and a suite of photographs of the internationally recognized choreographer and dancer Bill T. Jones.

A number of the photographs in the acquisition have not been reproduced, exhibited, or seen outside of the Herb Ritts Foundation’s archive.

“Through hard work and an imaginative vision, Herb Ritts fashioned himself into one of the top photographers to emerge from the 1980s,” says Paul Martineau, curator of the exhibition and associate curator of photographs at the J. Paul Getty Museum.  “This exhibition will reconsider and broaden our understanding of Ritts’s career, particularly in the areas of fashion and figure studies.”

By the mid-1980s, Ritts’ aesthetic had coalesced into a distinctive style. His creative output was enormous, and he appeared to be able to switch gears effortlessly between his jobs in fashion and portraiture and his personal work with the nude. After shooting a commercial job, Ritts often took advantage of the location, props, and models to make his own pictures. To accommodate his growing business, Ritts established a studio in Hollywood and assembled a creative team of assistants, stylists, and printers who strove to exceed his high expectations. Like his contemporaries, Ritts rarely printed his own work.  Through a pain staking selection process, he editioned his best pictures and had them printed in gelatin silver or platinum, varying the papers, levels of contrast, and tone to realize his artistic vision.

Ritts’ portraits of celebrities such as Richard Gere, Britney Spears, Mel Gibson and Madonna introduce the exhibition. His anti-glamour style of portraiture made celebrities look more natural and allowed them to reveal inner qualities, making them more accessible to fans. By the late 1980s, Ritts’ reputation as a shaper of fame made him a celebrity in his own right, and the iconic status of such photographs as Richard Gere, San Bernardino (1977) and Madonna, Hollywood (1986) made a photograph by Ritts a rite of passage among Hollywood insiders.

Go here to read the fascinating story behind the iconic Richard Gere photo.

The exhibition continues with Ritts’ fashion photographs, many of which drew inspiration from painting, sculpture, film, and the work of such leading fashion and portrait photographers as Richard Avedon, Horst P. Horst, George Hurrell, Irving Penn and Louise Dahl Wolfe. Ritts had an extraordinary ability to synthesize and incorporate these influences into a new and easily recognizable style.  As hundreds of magazine spreads demonstrate, Ritts kept top fashion editors happy by providing dazzling pictures designed to sell clothes along with others that simply celebrated beauty. Ritts also made use of locations around Los Angeles and especially loved Southern California’s natural light. For instance, Ritts harnessed the forces of nature, strong sunlight and gale-force wind in Versace, Veiled Dress, El Mirage (1990) to create an unforgettable image that communicates feminine strength and beauty. 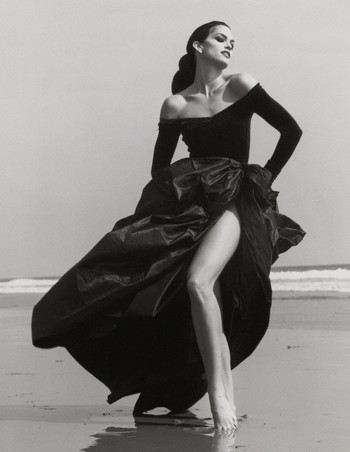 Turning to Ritts’ work with the nude, the exhibition examines how Ritts—along with his contemporaries Robert Mapplethorpe and Bruce Weber—provoked a radical change in how the nude was depicted. His forte was an ability to analyze the body from a variety of angles and create compositions that abstracted it in ways that communicate strength and poise. Working mostly outdoors, Ritts enjoyed relating the body to the natural world and rendered his nudes with a verve and elegance that became the dominant hallmarks of his pictures.  In Man with Chain, Los Angeles (1985), model Tony Ward is seen bending at the waist, as if struggling under the chain’s massive weight. The extraordinary sense of movement is not only forward but also upward in a tortuous S-curve that has been long associated with the dramatic, writhing bodies of seventeenth-century Baroque painting and sculpture.

Ritts’ work also includes portraits of well-known athletes and dancers. In the exhibition are a series of photographs of the critically acclaimed American dancer and choreographer Bill T. Jones. In these photographs, Ritts captured Jones while he danced, framing him against a pure white background, making his muscled body look like a piece of sculpture. He also photographed famous athletes including Michael Jordan, Magic Johnson and Olympic gold-medalist Greg Louganis. For Louganis’ portrait Ritts positioned the diver on a makeshift pedestal and placed a low spotlight on him. The carefully arranged pose and lighting show off Louganis’ muscled torso and back, while the prominent shadows recall the mysterious aura of film noir of the 1940s.

Although Ritts had no prior experience with filmmaking, Madonna convinced him to direct his first music video for her song “Cherish” (1989), which is included in the exhibition along with other music videos and commercials. Ritts enjoyed the creative challenge that film presented, allowing him to extend the sense of movement so important to his still photography to the moving image.  From 1989 until 2002, Ritts directed thirteen music videos and more than fifty commercials. Some of his music industry clients included Michael Jackson, Janet Jackson, Mariah Carey, Britney Spears and Shakira, while his commercial clients were mainly fashion and cosmetic companies such as Chanel, Lancôme, Estée Lauder and Calvin Klein.

Ritts’ intimate portraiture, his modern yet classical treatment of the nude, and his innovative approach to fashion brought him international acclaim and placed him securely within an American tradition of portrait and magazine photography that was begun by Richard Avedon and Irving Penn.

Herb Ritts: L.A. Style is organized by the J. Paul Getty Museum and curated by Paul Martineau, associate curator of photographs.  Following its showing at the Getty, the exhibition will be on view at the Cincinnati Art Museum from October 6 to December 30, 2012 and at the John and Mable Ringling Museum of Art in Florida from late February 2013. 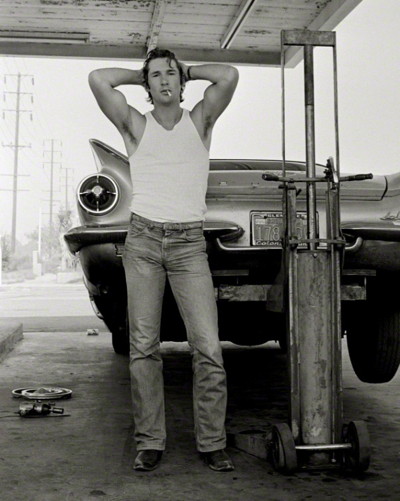 About the Getty Museum:

About The Herb Ritts Foundation:

The Herb Ritts Foundation was established under directives set forth by the artist.  The charitable purposes reflect Herb Ritts’ beliefs and commitments during his lifetime. The Foundation offers support to organizations which reduce the impact of HIV/AIDS and provide awareness, assistance and care for those affected by HIV/AIDS. The Foundation also promotes Mr. Ritts’ great passion for photography through offering assistance to institutions and educational programs that advance the art of photography.

With an essay by James Crump

A seductive collection of portraits and nudes from the famed fashion photographer is beautifully reproduced in this handsome volume.

The Getty Center is open Tuesday through Friday and Sunday from 10 a.m. to 5:30 p.m., and Saturday from 10 a.m. to 9 p.m. It is closed Monday and major holidays. Admission to the Getty Center is always free. Parking is $15 per car, but reduced to $10 after 5pm on Saturdays and for evening events throughout the week. No reservation is required for parking or general admission. Reservations are required for event seating and groups of 15 or more. Please call (310) 440-7300 (English or Spanish) for reservations and information. The TTY line for callers who are deaf or hearing impaired is (310) 440- 7305.

Additional information is available. Sign up for e-Getty here to receive free monthly highlights of events at the Getty Center and the Getty Villa via e-mail, or visit their official site for a complete calendar of public programs.