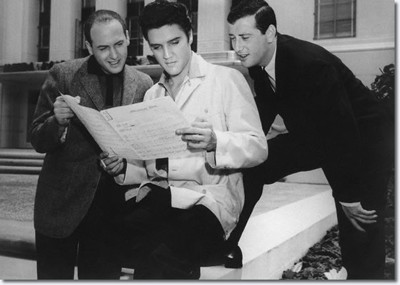 Mike Stoller of Leiber and Stoller – appearing at American Cinemateque

Mike Stoller, of the legendary Grammy Award winning songwriting team of Leiber & Stoller, will appear for a book signing of “Hound Dog:  The Leiber and Stoller Autobiography” at 1:00 p.m., followed by a Question and Answer Session and screening of the 1957 Warner Bros. classic film (originally made by MGM), “Jailhouse Rock” starring Elvis Presley at 2:00 p.m. on Sunday, August 19, 2012 at the American Cinematheque at the Egyptian Theatre, in Hollywood.

This screening will celebrate the life of The King of Rock & Roll, Elvis Presley, while simultaneously commemorating the 35th Anniversary of the late singer’s passing.

This one day only screening of the 96-minute film is an official Los Angeles 35th Anniversary celebration of the late Elvis Presley’s third film, “Jailhouse Rock” directed by Richard Thorpe featuring slambang Leiber & Stoller songs like the jaw-dropping title song and production number, “Jailhouse Rock,” along with “Baby, I Don’t Care” and more! 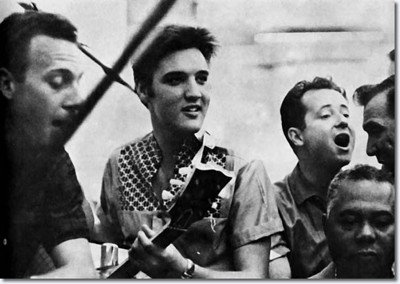 Elvis Presley, who plays the role Vince Everett in the film, is in the pen for manslaughter.  His cellmate, Hunk Houghton, played by Mickey Shaughnessy, is a former country star who introduces him to the record business.  On release from prison, the King quickly rises to the top as a Rock & Roll singer.  But will he remember the folks who got him there?  Also starring Judy Tyler (as Peggy Van Alden), Vaughn Taylor (as Mr. Shores), Jennifer Holden (as Sherry Wilson), Dean Jones (as Teddy Talbot) and Anne Neyland (as Laury Jackson).  Composer Mike Stoller makes a cameo appearance in the film playing the piano for Elvis Presley.  The film will be screened in a 35 mm format.

American Cinematheque at the Egyptian Theatre

Book signing of “Hound Dog:  The Leiber and Stoller Autobiography”

Tickets are $11 each for General Admission;

and $7 for American Cinematheque at the Egyptian Theatre Members.

The Box Office opens one and half hour before the first program of the day/evening and closes 30 minutes after the last film of the evening begins.

Tickets can be purchased by calling Fandango at 1-800-FANDANGO

Tickets can also be purchased here.

For further information please call the American Cinematheque at the Egyptian Theatre’s 24-hour information line at 323-466-3456 (for August 19th) or visit online here. 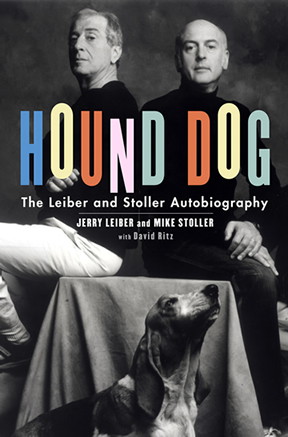 Mike Stoller is one-half of the legendary songwriting team of Leiber & Stoller.  Over the course of a 61 year partnership, Jerry Leiber and Mike Stoller created enduring classics in a variety of genres including Rhythm & Blues, Pop, Country, Jazz, Cabaret, and—perhaps most notably—Rock & Roll.

If Elvis Presley was the king of Rock & Roll, then Jerry Leiber and Mike Stoller were certainly two of the most important powers behind that throne.  It’s impossible to think of Elvis without thinking of “Hound Dog,” “Loving You,” or “Jailhouse Rock”— all creations from the pen and piano of Leiber & Stoller.

To carry the analogy a step further, the court jesters of the Rock & Roll kingdom would have to be The Coasters.  Leiber & Stoller wrote and produced all of The Coasters’ hits, including “Searchin’,” “Young Blood,” “Yakety Yak,” “Charlie Brown,” “Along Came Jones,” “Poison Ivy” and “Little Egypt.”

But Elvis and The Coasters are only two of the acts whose careers skyrocketed because of Leiber & Stoller’s creative partnership.

Mike Stoller and Jerry Leiber began their partnership in 1950 at the age of 17 when they discovered that they had a mutual passion for Boogie Woogie and the Blues.  By the time they were 20, Leiber & Stoller had seen their earliest songs recorded by such important blues artists as Jimmy Witherspoon, Little Esther, Amos Milburn, Charles Brown, Little Willie Littlefield, Bull Moose Jackson, Linda Hopkins, Ray Charles, and Willie Mae “Big Mama” Thornton.

Leiber & Stoller’s series of hits as both songwriters and record producers began with Big Mama Thornton’s recording of “Hound Dog” in 1953.  This record and others produced by them caught the attention of executives from Atlantic Records.

In 1955, Atlantic signed Leiber & Stoller to the first independent production deal, forever changing the course of the record industry.  Leiber and Stoller’s songs and productions were constantly on the charts during the next decade.  Aside from The Coasters’ many hits, there were Ben E. King’s “Stand By Me,” and “I (Who Have Nothing);” The Drifters’ “There Goes My Baby,” “Dance With Me” and “On Broadway;” as well as La Vern Baker’s recording of “Saved” and Ruth Brown’s “Lucky Lips.”

During this same period, while Leiber & Stoller were producing The Clovers (“Love Potion # 9”), Jay and the Americans (“Only In America”), and Chuck Jackson (“I Keep Forgettin’”), other artists were having hits with Leiber & Stoller compositions.  There was Wilbert Harrison with “Kansas City,” The Drifters with “Fools Fall In Love,” Dion with “Ruby Baby,” Peggy Lee with “I’m A Woman” and Edith Piaf with “L’Homme a la Moto.”  Elvis Presley recorded more than 20 songs written by Leiber & Stoller, including “Hound Dog,” “Love Me,” “Loving You,” “Jailhouse Rock,” “Treat Me Nice,” “Don’t,” “(You’re So Square) Baby, I Don’t Care,” “Bossa Nova Baby,” “Santa Claus Is Back In Town” and “Trouble.”

In 1969, the team produced the Peggy Lee recording of their composition “Is That All There Is?”  According to music critic Robert Palmer, “Is That All There Is?” was the song that “…clearly pointed to the direction their new work would take.”  It was this change in the creative style of Leiber & Stoller that prompted Palmer to write:  “…the Golden Age of Rock & Roll had come to an end.”

Leiber & Stoller have been the recipients of many awards and honors, including the following:

In March of 1995, Smokey Joe’s Cafe:  The Songs of Leiber and Stoller opened on Broadway at the Virginia Theatre.  Comprised of 39 Leiber and Stoller songs, the show was nominated for seven Tony Awards.  Smokey Joe’s Café would remain at the Virginia Theatre for over five years, becoming the longest-running musical revue in Broadway history, which it still is to this day.  The show also played London’s West End for two years, and has toured around the world.

In 2009, Hound Dog:  The Leiber and Stoller Autobiography, was published by Simon & Schuster.  In 2010, Leiber & Stoller celebrated their 60th anniversary as a songwriting team.  In April of 2011, the musical The People in the Picture, with music by Mike Stoller and Artie Butler and book and lyrics by Iris Rainer Dart, opened on Broadway at Studio 54.

In October 2011 Stoller was honored at a black-tie gala with Chapman University’s 30th Annual American Celebration Lifetime Achievement Award.  In November 2011 Stoller was honored as the BMI Ambassador at the annual dinner of the Society of Composers and Lyricists.  In 2012 the Original Broadway Cast Album of his musical, The People In The Picture, starring two-time Tony Award winner, Donna Murphy, was released.  The CD is currently available at www.kritzerland.com.  The musical was the recipient of a Tony Award nomination, three New York Drama Desk nominations, a New York Outer Critics Circle nomination and two New York Drama League nominations.

Mike Stoller is married to Jazz great, Corky Hale, with whom he appeared as Inaugural Guests in a new Speaker Series entitled, “In Conversation,” in March 2012 at the Museum At Eldridge Street in Manhattan, NY.  The Museum is the home of the 1887 historic Eldridge Street Synagogue, now celebrating its 125th Anniversary.  On May 31, 2012, Mike Stoller appeared in conversation with Steve Barri at the Skirball Cultural Center in Los Angeles.  On June 12, 2012 Stoller participated in the Forever Stamp Dedications for Edith Piaf and Miles Davis in New York City.  Piaf introduced Leiber & Stoller’s song, “L’Homme à la Moto” (“Black Denim Trousers and Motorcycle Boots”) in Paris at the Olympia Music Hall on May 24, 1956.  It became her biggest-selling single record.  On June 13, 2012, Stoller appeared as a Songwriting Panelist at the Princeton Club at the Association of Independent Music Publishers June Luncheon.  On June 14, 2012, Mike Stoller, Jerry Leiber, Stoller’s late songwriting partner, and Ben E. King were honored by the Songwriters Hall of Fame with the Towering Song Award for “Stand By Me” and Ben E. King was honored with the Towering Performance Award for his performance of the Leiber & Stoller produced recording of “Stand By Me.”

Mike Stoller will participate in Elvis Week in Memphis in commemoration of the 35th Anniversary of Elvis Presley’s passing in August 2012.  Stoller will also appear in Los Angeles at a celebration of Elvis Presley’s life commemorating the 35th Anniversary of Elvis’ passing at the American Cinematheque at the Egyptian Theatre in Hollywood, CA on Sunday, August 19, 2012 at 2:00 p.m., for a screening of the Warner Bros. movie, “Jailhouse Rock,” a movie in which Mike Stoller appears playing the piano for Elvis Presley.  The screening will be preceded by a book signing at 1:00 p.m. of Hound Dog:  The Leiber & Stoller Autobiography, followed by a Q&A with Mike Stoller and the screening of the movie.