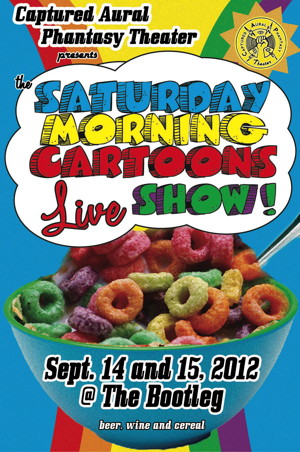 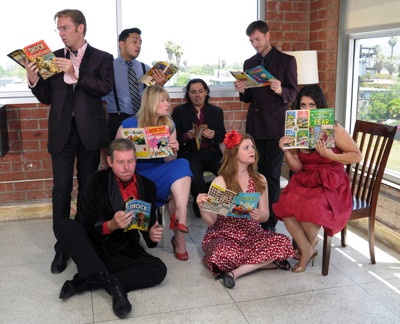 Hey kids! Captured Aural Phantasy Theater is bringing The Saturday Morning Cartoons Live Show to the Bootleg on the evenings of September 14 and 15.

Making its world premier, this variety show promises to stir up the excitement of starting the weekend by gorging yourself on Hanna-Barbera and sugary cereal. The Captured Aural Phantasy players bring to life nuggets of pop culture straight from the heyday of Saturday morning TV (1970 – 1988) through live performances of vintage cartoons, ads, PSA’s, music and more! More than a nostalgia trip, the show brings the ritual of Saturday morning cartoons to new audiences that may have missed (or were too young for) the fun the first time. Cereal will be provided, but now, thanks to the Bootleg, they’re serving beer and wine as well. Cartoon fans are urged to come in their pajamas for VIP seating!

Captured Aural Phantasy Theater is what would happen if Garrison Keilor, John Waters and Stan Lee all hooked up after a night of hard partying. They combine the art, drama and comedy of a vintage radio program with the live entertainment of a variety show. Shows are built around performances of vintage pop culture gems, usually giving old comic books a modern voice, along with live sound fx, music and projected art. Shows also include short acts, sultry singing, prizes, special guests and live music. In The Saturday Morning Cartoons Live Show, they interpret both comic book adaptations and actual episodes of classic 60’s, 70’s and 80’s cartoons. The fun-filled evening also comes packed with music by members of the super-powered surf band “The Noble Gasses.”

The Saturday Morning Cartoons Live Show is the first in our Fall 2012 mini-season that will include a Halloween Spook Show in October and a thrilling Noir show after Thanksgiving. For the past few years, Captured Aural Phantasy Theater has been performing around Los Angeles at a number of venues, including the Alexandria Hotel, Meltdown Comics, and the Velaslavasay Panorama. We are super-excited to be returning to the venerable Bootleg Theater main stage for the debut of The Saturday Morning Cartoons Live Show. Captured Aural Phantasy Theater is a group dedicated to producing high-quality live, filmed and recorded entertainment; bred in Chicago, but in LA to stay. We never fail to entertain!

$10 at the door or purchase online here. bootlegtheater.org

$15 for VIP for floor seating (up close to the action!)

About The Bootleg Theater:

The Bootleg Theater is a space for art; a place where Los Angeles artists of all disciplines can come together and create new, exciting theatrical events. In this 1930’s warehouse (formerly a bra factory), we have been producing theater since 2000.  We produce brave, boundary-pushing, artistically outstanding, and highly collaborative new work.   Work that develops an audience of all ages, from all walks of life.  Work that is exciting to many different kinds of people, serving as a reflection of the City we live in.