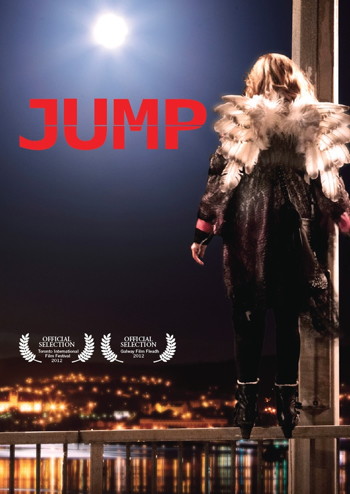 The Los Angeles Irish Film Festival launches this week, on Wednesday, September 26th, 2012, at the Academy’s Linwood Dunn Theatre in Hollywood with a screening of Jump, by director Kieron J. Walsh.

Crime boss daughter Greta is rescued from suicide by stranger Pearse on New Year’s Eve, a night that will change both their lives forever.
Jump follows the lives of four twenty-somethings whose lives collide one fateful New Year’s Eve amidst the ancient walls of Derry, Northern Ireland in a night of fast talk, coincidence and intrigue. As the clock ticks towards midnight and the night’s events expertly fall into place, Jump weaves an existential portrait of our character’s lives as their hopes, fears and secrets are revealed.

Please note: itsmyseat.com is providing the ticket to the opening night only.

For information about the remaining screening tickets, please visit the official festival page.

The LAIFF celebrates the Irish passion for storytelling, a tradition that started around the hearth of every Irish household and has found its voice internationally through the medium of film. Coupled with the treasures of Ireland’s moviemaking past, LAIFF presents modern works as diverse as they are unique, creating a cinematic barometer for the cultural climate of Ireland in 2012.

Kicking off the festival (proper) is a double feature of Kirsten Sheridan’s teen drama DOLLHOUSE, followed by Ian Fitzgibbon’s whimsical coming-of-age tale blending live action and animation, DEATH OF A SUPERHERO, with a discussion between films with Sheridan and actor Jack Reynor. Next up is a dark and delightfully subversive double feature of Ciaran Foy’s festival favorite CITADEL, about a single father’s nightmarish visions, and Terry McMahon’s controversial CHARLIE CASANOVA, about a man who tests fate after committing a hit-and-run, with a discussion between films with Foy. Also screening is BERNADETTE, Lelia Doolan’s documentary portrait of political activist Bernadette Devlin; and a double feature of Kieron J. Walsh’s JUMP, about a number of colliding stories on New Year’s Eve, and folk music doc LET THE PEOPLE SING.

Closing the festival is an Irish shorts program and a historical double feature of documentary veteran Robert Flaherty’s 1934 MAN OF ARAN and HOW THE MYTH WAS MADE: A STUDY OF ROBERT FLAHERTY’S MAN OF ARAN.

Also, check out the official site  for details on:

Sea of Exchange Exhibit Artists from Ireland and Los Angeles take part in this exhibit focusing on the building of an Irish Currach by boatwright Donal McPolin. The boat will be built over the 5 days of the festival and launched on the closing day.

A Liberation Special Event Featuring Fionnula Flanagan and other Mad, Bad & Dangerous Irish Women. This is an event not to be missed!

Sponsored by the Irish Film Board, Irish Film Institute, Culture Ireland, Aer Lingus, Jet Blue, and Guinness, with the support of E.L.M.A. (European Languages and Movies in America).

Special Note: All tickets purchase and donations made are for American Ireland Fund, a 501 C3 non profit organization. Please retain your eTickets as a receipt of donation for your tax records.