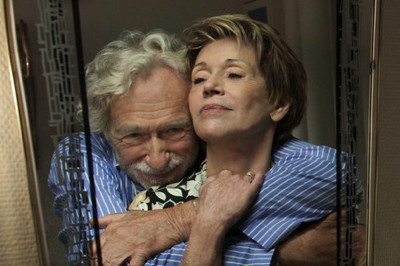 “All Together” – film review. Good Actors Pile into a Ho-hum Vehicle… 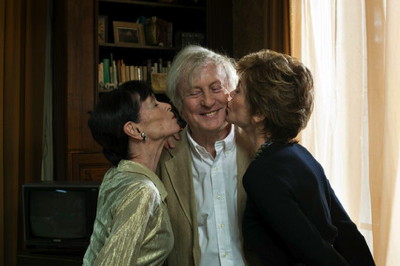 Writer-director Stéphane Robelin’s second feature film attempts to be both funny and sad, life affirming and deep.  Sadly, All Together emerges as predictable and bland, squandering the talents of five seasoned actors who improve on but can’t rescue the contrived and slumbersome script.

Among the notable talent is Jane Fonda, appearing in her first French-language film since Jean Luc Godard’s 1972 Tout Va Bien.  Fonda delivers a nuanced performance as Jeanne, a strong attractive woman who, we soon learn, is terminally ill.  She conceals the diagnosis from her husband, Albert (Pierre Richard), a sweet man in the early stages of dementia whom she cares for deeply and protects, and from their close friends, married couple Annie (Geraldine Chaplin) and Jean (Guy Bedos).   A long time activist, Jean has lately become aware of his age and a change in how people perceive him.  At political rallies he smolders when the police ignore his protests, dismissing him (we surmise) as an irritating but harmless old codger.   Meanwhile, Annie grumbles because her grandchildren hardly ever come to visit, and badgers the reluctant Guy to build a backyard pool to entice them to come.  Finally there is Claude (Claude Rich), a photographer with charm, a heart condition and an abiding preoccupation with sex.

Sensitive to her own and her friends’ growing vulnerability, Jeanne proposes that everyone move into Annie and Jean’s large country house.  She convinces a young anthropologist, Dirk (Daniel Brühl) to abandon his studies of aborigines and focus instead on the habits and proclivities of aging Europeans, at the same time persuading her friends to hire the young man to help around the house.  During long walks, Dirk talks to Jeanne about his troubles with his fiancée while she recalls her life and, responding to a question she provoked about sex, informs him that she still masturbates.  You get the feeling she finds Dirk attractive, but as she’s a sensible woman and this is a rather staid film, that story line never goes anywhere.

For the first twenty establishing minutes, All Together seems like it might develop into an entertaining and perhaps even insightful movie: venturing, via voiceover, into the capricious wanderings of Albert’s mind, observing Jeanne as she shops for a casket in an ornamental color, or cheering for Annie when she polishes off several glasses of brandy, unbuttons her blouse and lets down her hair, and launches what are evidently practiced emergency procedures to calm her man and keep him in his place.

But none of that promise plays out.  Once the characters and their issues are introduced, the script settles into lukewarm humor and pedestrian plotting, milking strained laughs from the interaction between youth and age.   The problem: Brühl’s 20-something scholar, ambassador of the young, is fundamentally a dull guy who, lacking an interesting story of his own, serves merely as a standard foil for the older folks and not much else. That kind of cloying simplicity presents itself elsewhere.  For example, an assisted living facility, where Claude’s Philistine son has installed him after his heart attack, gives a by-the-numbers depiction of these depressing places, with the zombie-like residents intended to serve as a contrast to our life-loving quintet.  Nothing wrong with that – except that the entire sequence comes across as so very obvious.  One scene – where Claude’s friends stage an emergency rescue, circumventing the staff and scrambling pell-mell from the place – is meant to be hilarious but just isn’t that funny.  Like so much else in the film, it’s cutesy and overdone.

On the plus side, it’s great to watch these five talented veterans at work. The film does recover some of its energy towards the end, with the revelation of a big secret.  And living as we do in a culture where ageism is rampant, Robelin’s efforts to counter desiccated old fogey stereotypes is commendable.

All Together by Stéphane Robelin is now playing in selected LA cinemas.

In French, with English subtitles.