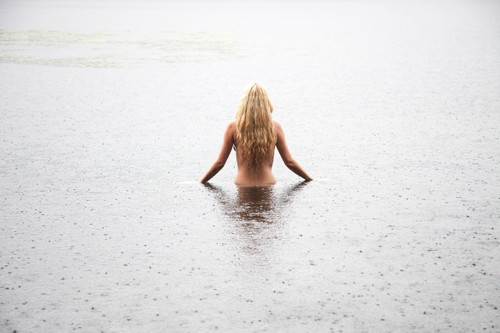 Anat Ebgi is pleased to announce Jen DeNike’s second Los Angeles exhibition, The Star Card, a sensory experience and immersive environment of video, photography, sculpture, collage, and performance. The exhibition pronounces her interest in the choreography of ritual as forms, sites and artifacts.

Full Moon Fever, a live two-hour performance will be presented at the opening night only.

The Star Card, the title of DeNike’s new video and centerpiece of the exhibition, takes its name from the seventeenth Major Arcana tarot card. In the video a voluptuous nude female figure kneels at the edge of a small pool of water, one foot on land, one foot in the water. She pours water into water and water onto the land from two pitchers; the act of pouring becomes an endless ritual for renewal.

In the original tarot card eight stars appear overhead, symbolically paralleling eight planets (the Sun, the Moon, Mercury, Mars, Jupiter, Saturn and Venus) time and space as the four elements, the two solstices and two equinoxes, the eight pathways of the Buddha, and the eight pointed star as an emblem of hope and inspiration. In DeNike’s version, she pulls small white hand-made stars one at a time from her mouth, a birthing rite of sorts, as she awkwardly crouches in the foliage, the reflective pool an oasis for her subconscious, the stars a wishing well, the water her fountain of youth, immortal, yet fragile as she teeters at the edge of the landscape.

A series of ten all white abstract works on paper with painted canvas will be presented as energy works; collaged artifacts from Jen’s performance work relating to the color white as a medium, using circles and sacred geometry. While making the collages DeNike enters into a hypnotic state where physical labor merges into another state; something akin to what certain types of music can induce, like dance or meditation.  In Kundalini yoga the practitioner raises energy from the lower chakras up the spine to the pituitary gland otherwise known as the third eye. Through the act of cutting and arranging the material, DeNike is raising energy and projecting it into the culmination of these visual abstractions.

Full Moon Fever is a two-hour performance of individual disciplines that will be performed ensemble as a compositional score intended on raising energy. Performers include; eight yogi’s meditating and chanting, a Kung Fu master, a young woman dancing around the room with a portable record player, five Tai Chi practitioners, a slack rope walker, five young men performing a magick ritual, a contemporary dancer, and a woman singing Joni Mitchell’s California. The performance functions as a choreographed loop of singular moments and overlapping actions that culminate into a climatic cannon of repetitve actions, dance, sound, ritual, and metaphysical space within the architecture of the gallery and surrounding courtyard.

I am the great grand-daughter of a Finnish seer, a woman who read the tarot and rode bare-back in the Wild Bill Cody traveling show in 1917 to support herself after she divorced her orthodox Jewish husband because she wasn’t Jewish enough, but I suspect maybe there were other reasons; she couldn’t contain the nomadic feminist adventurer, and went solo.

When I moved to Brooklyn straight out of college, I realized years later that I had been living just two blocks from where my great-grandmother had landed at her first residence in America. My father only told me about her seven years ago and I put the details together. A few months following the unraveling of her story, a friend gave me my first tarot deck and I dove in. Finding my seer great-grandmother was an epiphany, having thus far been a misfit with unexplainable odd visions that other people usually only have on hallucinogenic drugs (none of which I ever took). Shortly there-after another spirit guide/mentor prodded me with this, “Jen, you’re a prodigy without a piano, when are you going to start practicing? Find a piano”.

This exhibition is a continuation of my research into various forms of ritual, alchemy, the tarot, ecstatic dance or actions that elicit other states of being, hypnosis, ideas regarding the mystic, and meditation. These days the general public can relate to the word meditation; it’s a less scary and more acceptable way of saying “the search for a higher form of consciousness”. The occult merely means “the unknown”, hermetic language and various magick practices have always been misunderstood and bastardized.

WEDNESDAY – SATURDAY 11AM – 5PM, OR BY APPOINTMENT

The Star Card exhibition will be on view from November 10 through January 26, 2013.

Full Moon Fever, a live two-hour performance, will be presented at the opening night only.