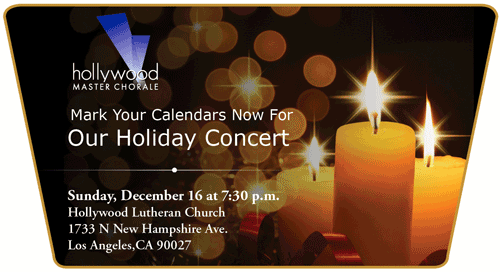 The holidays are a time when we tend to dust off traditions we have long loved as we begin preparations to celebrate the season. But sometimes it’s good to mix it up a little bit, too, as the Hollywood Master Chorale (HMC) will do when it presents its holiday concert, “Sweet was the Song,” on Sunday, December 16 at 7:30 p.m. at Hollywood Lutheran Church in Los Angeles.

“For many concertgoers, a holiday concert wouldn’t be complete without a Hallelujah chorus,” says Artistic Director Lauren Buckley. “And, often, that means Handel’s chorus from Messiah. However, this year we decided to introduce our audience to three other Hallelujah choruses, each unique and beautiful in their own way. Salamone Rossi’s setting is an example of early Baroque music and Beethoven’s Hallelujah is a thunderous finale in the vein of his more dramatic choral works. Louis Lewandowski was a prominent Jewish composer in the 19th century whose works are frequently performed at Temple services.”

Handel aficionados need not be disappointed, however, Buckley adds. The chorale will also present Let Their Celestial Concerts All Unite from Handel’s oratorio Samson.

“Nearly every selection we will sing – whether it’s a jazz tune or a traditional carol or a classical work – illustrates how the wonder of music literally brings joy to the world,” Buckley explains. “In fact, the title of our concert, ‘Sweet was the Song,’ is taken from the opening line of another work on our program, Stephen Paulus’ A Savior From on High. Those four words – Sweet was the Song – then inspired and guided us as we set about programming the remainder of the concert.”

Additional works Buckley has included range from Glory to God by Giovanni Battista Pergolesi to A Festival of Carols in 2 Minutes, a medley of more than 15 popular songs recently made famous by the London quartet Cantabile.

“We can’t wait to ask the audience, ‘How many can you identify?’” says President Beverley Clarkson, with a smile.

The Hollywood Master Chorale presents “Sweet was the Song,” featuring an array of music used to celebrate the holidays, including A Savior From on High (Stephen Paulus), Glory to Tod (Pergolesi), A Festival of Carols in 2 Minutes and Hallelujah Choruses by Rossi, Lewandowski and Beethoven.

~
ABOUT THE HOLLYWOOD MASTER CHORALE

The Hollywood Master Chorale (HMC) currently celebrates its 18th season of outstanding music. Founded in 1995, the Hollywood Master Chorale is a non-profit vocal organization comprised of men and women who share a passion for the art of choral music and a dedication to service in their community. The volunteer Chorale is known for its ability to perform a diverse repertoire, including Baroque, Classical and contemporary music.
A recognized and respected ensemble, the Hollywood Master Chorale offers three major concerts with pre-performance discussions and an intimate Cabaret annually throughout the greater Los Angeles region. In addition, the HMC regularly performs at private, community and civic functions. Highlights of recent performances include:
LA Composers Concerts, featuring works by twenty composers in the Los Angeles region. More than half the pieces presented were premiers for the artists.
“All Ye Who Music Love,” with members of the Calabasas Chamber Orchestra and showcasing works by Bach, Purcell and other Baroque favorites.
Lauridsen’s Lux Aeterna and Fauré’s Requiem with orchestra to sold-out audience at Zipper Concert Hall.
Passion!, featuring Stephen Sondheim selections from Company and Follies, Shakespearean songs with music by David Dickau and a selection of English and French madrigals.
Russian Cultural Festival
Director’s Guild of America honoring John Schlesinger
Evening of music for Laurie Metcalf (Toy Story, Toy Story 2, Runaway Bride, The Rosanne Show)
Christmas Program for Holiday Home Invasion (Women’s Entertainment Network)
Haydn’s Stabat Mater with orchestra
Shelton Berg’s “Convergence: A Jazz Vespers,” with soloist Tierney Sutton and accompanied by the composer.

The HMC has also been featured at the Dorothy Chandler Pavilion, the Torrance Invitational Song Festival, various summer concert series and mayoral installations.
The Chorale enjoys performing with guest musicians such as the Calabasas Baroque Orchestra, the California State University Long Beach Brass and Percussion Ensemble, the Mark Twain Ringers, the Ebell Chorale and the Hollywood Master Chorale Orchestra. Guests including Julia Migenes and soloists from the Los Angeles and San Francisco Opera Companies have also contributed to captivating Hollywood Master Chorale performances.

Community outreach is one of the cornerstones of the Hollywood Master Chorale. The HMC focuses on three areas of service: the disabled community, youth and arts education and cultural diversity.