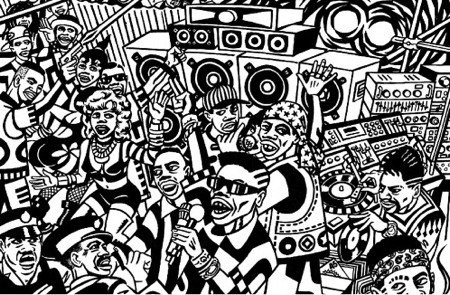 In conjunction with and curated by Al Fingers and Shimmy Shimmy, SUBLIMINAL PROJECTS is proud to present Art in the Dancehall, an exhibition celebrating dancehall illustration and design from 1979 to the present.

Opening event for Art in the Dancehall kicks off at 8 pm this Saturday, February 2, 2013, with vibrant sets by two special musical guests: DJ Tom Chasteen from Dub Club and My Lord Sound.

The exhibition will be on view through Saturday, March 2, 2013.

The gallery store at SUBLIMINAL will feature the 2012 publication Clarks in Jamaica by Al Fingers and a limited edition print by Tony McDermott.

Dip down & come up @ SP this Saturday!

Dancehall and Jamaican soundsystem culture has a rich and vibrant artistic past as well as an undeniable influence on design and letterform in contemporary pop culture. Early 1980s Jamaica was a changing place, politically and musically, with a new generation of deejays bringing in a brand new sound. Mirroring this change in the music scene, were graphic designers and illustrators translating the energy, color and playfulness of dancehall into a world of crazy characters and vivid, saturated colors.

Art in the Dancehall