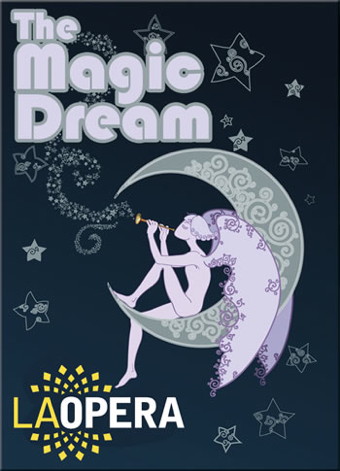 La Mirada Theatre for the Performing Arts continues its 2012-13 Programs for Young Audiences series with LA Opera’s The Magic Dream, an original adaptation of Mozart’s The Magic Flute.

This lighthearted show is a wildly imaginative and engaging celebration of Mozart’s The Magic Flute.

Young Pam grew up listening to The Magic Flute with her grandparents, but never understood what was happening in the story. Pam invites us to explore the opera in her creatively, re-imagined version in which she has cast her friends as the colorful characters of The Magic Flute. Together, they learn that music and your own imagination can take you anywhere.

The Magic Dream was created by Lee Holdridge and Richard Sparks and directed by Eli Villaneuva.

Subscriptions for all four shows (info below) are $24 for children and $36 for adults.

La Mirada Theatre’s Programs for Young Audiences is designed to give children exposure to a diverse mix of national and international touring stage acts while enriching their lives.

The season will continue with ArtsPower’s The Little Engine That Could Earns Her Whistle on March 3, 2013,

American Family Theater’s Beauty and the Beast on March 17, 2013

and will finish with