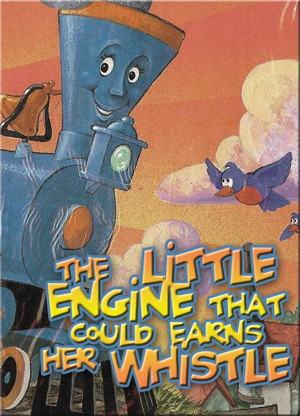 La Mirada Theatre for the Performing Arts continues its 2012-13 Programs for Young Audiences series with ArtsPower’s The Little Engine That Could Earns Her Whistle, an original, new musical based on Watty Piper’s beloved children’s book, The Little Engine That Could. This 55-minute, song-filled adventure is recommended for audiences ages 4 and up.

Little Blue Engine dreams of someday leaving the train yard to pull the big cars on the main line track. But can she convince Big Silver that she is worthy of being a main line engine? Back to reprise its sold-out premiere season, ArtsPower’s dynamic musical portrays Watty Piper’s timeless tale about hard work, determination, and the meaning of true friendship.

The Little Engine That Could Earns Her Whistle features a dynamic, Broadway-style score and colorful, inventive sets and costumes.  The production was adapted and directed by ArtsPower’s artistic director Greg Gunning; Greg also wrote the lyrics, while Richard DeRosa created and orchestrated the musical score.

Mark Blackman and Gary Blackman founded ArtsPower in 1985 and have been steering its course ever since.  ArtsPower has grown into one of America’s premiere producers of professional theatre for young and family audiences. Its 27 professional touring musicals and dramas have been seen by 12 million people in 48 states – from Alaska to Florida – in hundreds of the nation’s top cultural centers, including the Kennedy Center in Washington, DC and Lincoln Center in New York.

La Mirada Theatre’s Programs for Young Audiences is designed to give children exposure to a diverse mix of national and international touring stage acts while enriching their lives. The season will continue American Family Theater’s Beauty and the Beast on March 17, 2013 and will finish with Fred Garbo’s Inflatable Theater Company on May 19, 2013.

ArtsPower’s The Little Engine That Could Earns Her Whistle

Subscriptions for all three shows are $18 for children and $27 for adults.