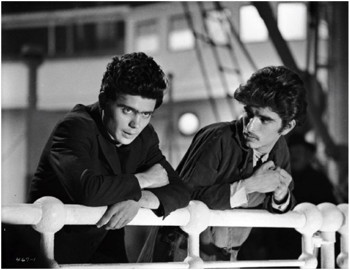 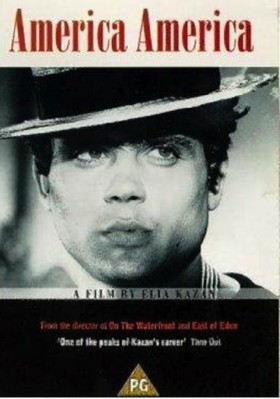 In his 1988 autobiography (Elia Kazan: A Life), Elia Kazan wrote of his 1963 Academy Award winning film America America, “During my experience… I felt totally myself in a way I never have before.”

Elia Kazan was born “Elia Kazanjoglous” in Istanbul in 1909 to Greek parents. He emigrated to the United States when he was four years old and went on to become an acclaimed novelist and writer/producer/director of theater and film.

On Friday Night, the 7th Annual Los Angeles Greek Film Festival (LAGFF) paid tribute to the three-time Oscar winner with a screening of that film and a discussion hosted by fellow Academy Award winner and resident of HBO Miniseries and Cinemax programming Kary Antholis.

“America America marks the moment when [Kazan] moved from interpreting and reflecting the visions of others to becoming a creator, author, presenter of his own view,” said Mr. Antholis, who is also on the Advisory Board for LAGFF.

Celebrating its 50th anniversary this year, the film follows the brutal journey of Stavros Topouzoglou (Stathis Giallelis) from his rural town in Turkish Anatolia to Constantinople and ultimately to America in the late 19th century. The film was largely inspired by Kazan’s uncle, Avraam Elia Kazantzoglou, or A.E. Joe Kazan, who made a similar journey and who was responsible for Kazan’s father’s and Kazan’s own emigration to America from Anatolia when he was a small child.

In attendance for the screening was America America cinematographer Haskell Wexler, now 91 years old, who remembered the filmmaking experience this way: “That picture is Elia Kazan’s picture. It’s not just that he wrote it. Within the picture itself is psychologically, sociologically, politically, his persona… I’m very proud to be a part of his film.”

After brief introductions by Director of Programming Aristotle Katopodis and LAGFF Co-Founder Angeliki Giannakopoulos, Mr. Antholis was warmly greeted at the podium by the audience. Thanking the producers of the festival, he urged all in attendance to savor every frame of America, America, citing the film, and director, as a personal inspiration. 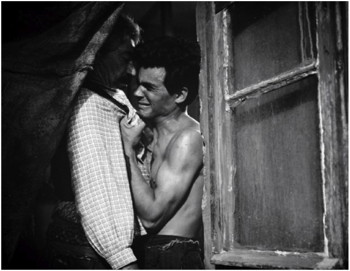 “The work that offers the most insight into the legacy and artistic significance of [America, America],” stated Antholis, “is his autobiography. I read it for the first time twenty-five years ago when I was twenty-five years old, and I found it to be one of the most brutally honest and enlightening windows into an artistic soul that I would ever read.”

The film also had a special resonance to filmmakers in the audience who have made their own cinematic journeys from their home countries to the premiere festival of its kind on the West Coast.

Reading from the autobiography, Antholis quoted Kazan’s words, “Movies became my passion. They were dreams like my dreams… Who could know as well as I did the story of how my uncle came to this country? In someone else’s hands it would lose its flavor. I had to write that screenplay myself.”

Growing up in New Rochelle, NY, Antholis suggested that Kazan struggled with the sensation of being an “ambitious outsider,”—something that despite his numerous achievements was not righted until he commenced production on America America. Speaking of Giallelis, whom Kazan cast as the lead with encouragement from Wexler, he wrote, “All you had to do was look at him and you believed the story of America, America.”

Following the screening, two-time Academy Award Winning Cinematographer Mr. Wexler offered a further comment on the film; “One thing is what America meant to people, one thing was what empire and what repression of people does to human beings. How they respond in different ways to work their way out. I think the film does that in a complicated and good way… It’s worthy of a lot of talk, a lot of discussion, and that can’t be said about a lot of films.”

When asked about the most difficult scene for him to film, Wexler added, “The most challenging sequence—and the most gripping one—was the scene with Stavros and his wife, where the totality of their issues and their ambition and desire and love, empathy and interaction were conflicted. So you felt for both people, but you could see where Kazan’s view was. And even though it’s just a scene in a room between two actors, to me it was quite moving, even now.”

A deeply personal film, America America is one that also best embodies Kazan’s own struggles. By the time of its release he was already famous for helping launch the careers of such luminaries as Marlon Brando (On the Waterfront, A Streetcar Named Desire) and James Dean (East of Eden). Along with representing a beacon of change for film, Kazan was highly influential to the world of theater in the 1930s and 40s by establishing himself as a director first with New York City’s Group Theater and later helping to found the Actor’s Studio along with actors Robert Lewis and Cheryl Crawford.

Still, it was the themes of America America that lingered most in his psyche. Describing the heritage of his family, Kazan wrote, “A captive people since the fall of Constantinople in 1453, their tactic for safety was to blend in with the Turkish population… This tactic persisted when some of these people came to America. You who live in safety may call this self-betrayal. Don’t be so superior. I’ve seen the same thing here among many other races of people… The one thing any ambitious outsider cannot tolerate is to be trapped.”

If that legendary outsider was present for this LAGFF Tribute, most likely he would not feel the need to pass nor have the fear of being trapped.