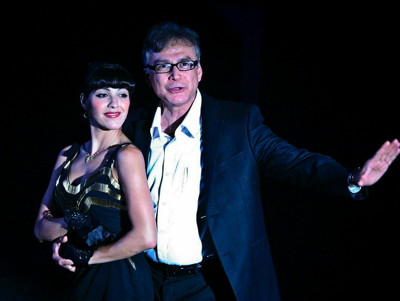 For the better part of Maury Yeston’s musical Nine, now playing in a six-week run at The Met Theatre, central character Guido Contini is surrounded by women; his wife, his lover, his colleagues, his mother… The show begins with “Overture Delle Donne,” a collective serenade by his women, sanctifying him and in some ways allowing Guido to indulge in the fantasy that his life has seemingly devolved into. It transpires that after 20 years of making films, he has found his creativity has become blocked. With more than just the next film at stake, Guido now battles with weight of his own dreams. And as for all dreamers, he cannot exist without, at some point, being forced to wake up.

Based on characters first introduced by Federico Fellini in his 1963 Academy Award-winning film 8½, Nine is as much a homage to the famed Italian director as it is to the fictional one depicted in Fellini’s film. The idea for a musical loosely adapted from 8½ came to Yeston in 1973; it then took eight years to make it to Broadway. When the show finally made its debut, however, it was directed by Tony Award winning actor/choreographer/director Thomas “Tommy” Tune, starred a young Raul Julia, lasted 729 performances and took home five Tony Awards in 1982. In addition to various revivals and concerts worldwide, a film version, starring Academy Award winners Daniel Day-Lewis and Marion Cotillard, was released in 2009, introducing the musical to a new generation. For this production, director Marco Gomez has chosen chosen to include the songs “Cinema Italiano” and “Guarda La Luna” that were specifically written for the film version.

So, Nine has a sturdy foundation to build upon.

DOMA Company regular David Michael Treviño plays the brooding Italian director who decides to take his wife Luisa (Melissa Anjose) off to a spa in Venice to help clear his mounting anxiety. Unfortunately, as soon as they arrive, they are swarmed by the paparazzi, Guido’s mistress, Carla (Lovlee Carroll), and his tough-as-nails producer, Liliane LaFleur (Emilia Sotelo). Also ever-present throughout Guido’s travels are the countless young actresses who throw themselves at him in hopes of being cast in his films. To make matters worse, Guido has neither a script for his next film nor a star.

Chris Raymond’s musical direction is very fine, with a seven piece band that embodies the original jazzy, sleazy heart of the production. Standout numbers include the lovely “A Man Like You/Unusual Way” sung beautifully by Toni Smith,  the grandiose “Follies Bergeres” led powerfully by Sotelo, and the very tender “Simple” sung by Carroll. Rae Toledo’s choreography is fluid and entertaining.

The problem with Nine as a musical is not the music or the story, however, but the disconnect between the two. Yeston’s music seems to outpace Arthur Kopit’s book and because of that flaw, Guido becomes something of an unbalanced character. This is most evident in the transition from recitatif to song. Instead of trying to understand the women that populate his life, Guido chooses to use them sexually. He comes to life with some  emotionally-charged songs, (“Only With You”, “I Can’t Make This Movie”) but then reverts to an unaffectionate, cool observer.  His only real solace seems to occur when he recalls his childhood. The problem again is that instead of trying to understand his nine year-old self (Donovan Baise) or his domineering mother (Michelle Holmes), Guido remembers those times as his happiest ones and not the ones that most likely led to his current emotional struggles.

The cinematic works of Fellini are almost never easy to understand. His storytelling is poetic and his mythos even more so. That being said, Nine is not 8½  and does not require foreknowledge of that classic film. Taken on its own, Maury Yeston’s musical Nine is entertaining, but at times, lopsidedly so.

Nine (Presented by The DOMA Theatre Company, in association with the Hope and Union Foundation)

Fridays and Saturdays at 8pm and Sundays at 3pm

$5.00 (behind Catalina Market in the alley, just east of Western and south of Santa Monica Blvd.)