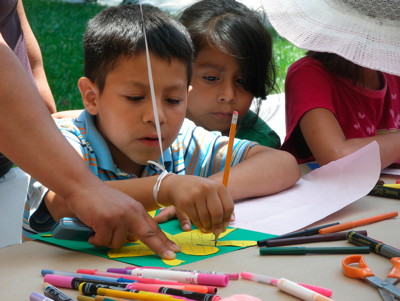 Once again the Hollywood Arts Council is presenting their 28th Annual Children’s Festival of the Arts.

Emceed by AMP Radio 97.1 FM’s DJ, Casey McCabe, the FREE One-Day Only Festival will be held on Sunday, August 11, 2013 from 12-Noon – 4:30 p.m. at Paramount Pictures studio in Hollywood (5555 Melrose Avenue) in the shaded garden setting adjacent to their historic gated entrance. The festival features live performances of dance and music from around the world, celebrities, family art workshops, face painting and puppet making.

Food and drinks will be available for sale. Entry is at the Bronson Gate, where there will be ample free parking on site.

PERFORMERS AND WORKSHOP ARTISTS TO INCLUDE:

and Gayle Gale, “Maker A Shaker for Love”

–      Jessica Belkin, The Road To Nowhere, Rise of the Guardians

–      Elaine Horn (Dorothy Gale Impressionist from The Wizard of Oz, along with Toto, too!)

A FREE One Day Only event.

Food and drinks will be available for sale.  Enter at Bronson Gate, where there will be ample free parking on site.  For more information, call 323-871-2787 or visit their online site here.

7 Performances (subject to change without notice):

8 Workshops (subject to change without notice):

–      The City of Los Angeles Department of Cultural Affairs

This Children’s Festival is a celebration of the arts and culture in Hollywood.  The festivities will include a full schedule of performances featuring a variety of music, dance, and entertainment from around the world for all ages.  An assortment of art workshops with professional artists will provide children with the opportunity to create their own art pieces as souvenirs.  There will be face painters and many other surprises.  Food and drinks will be available for purchase.  “This wonderful non-commercial event has become a family tradition,” according to HAC president Nyla Arslanian.  “People whose parents brought them to the festival are now bringing their kids.”

Impressionist Elaine Horn will make a personal appearance as Dorothy Gale from “The Wizard of Oz,” along with Toto, too!  Favorite Looney Tunes characters courtesy of Six Flags Magic Mountain and special celebrity guests will be available for photos and autographs.  Festival attendees can get their picture taken on the Red Carpet inside the Paramount Theatre.  Actors from the Screen Actors Guild Foundation will conduct their popular BookPALs story readings.  Members of the Los Angeles Police Department Hollywood Division Cadets will be on hand to provide assistance to festival attendees.  Raffle Drawings will also be held for valuable prizes.

The Children’s Festival of the Arts is presented by the Hollywood Arts Council, a community-based organization founded in 1978 to promote, nurture, and support the arts in Hollywood.  The FREE annual Children’s Festival of the Arts is one of many projects and events presented by the Council to enhance the quality of life in the city and promote the arts.  The Council’s projects also include Project SOAR (Students Overcoming All Risks), an after school art program presented in Hollywood area elementary schools.

Strongly linked to the Council’s purpose to promote, nurture and support the arts is the belief that the arts revitalize people as well as communities.  Project S.O.A.R. (Students Overcoming All Risks), its after-school art program and the annual Children’s Festival of the Arts held each August at Paramount Pictures brings free art workshops and performance to thousands of children and their families. The Council also created the Annual Awards Luncheon “The Charlies” to honor individuals and organizations for their significant contributions to the arts and Hollywood. Through the years, the Council has spearheaded many community arts projects. The Council has served as a catalyst convening arts organizations working in Hollywood for its periodic Arts Roundtables and promotes Hollywood’s performing arts with a daily calendar of arts activities published in Discover Hollywood magazine and on its website.

The Hollywood Arts Council has been recognized by the Los Angeles City Council, Los Angeles County, the Hollywood Chamber of Commerce, former State Senator Curren Price and Congressman Adam Schiff for its tireless efforts on behalf of the arts and the community of Hollywood.  At its annual Charlie Awards Luncheon in April, the Council celebrated its 35th anniversary.