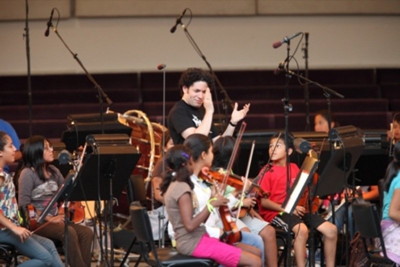 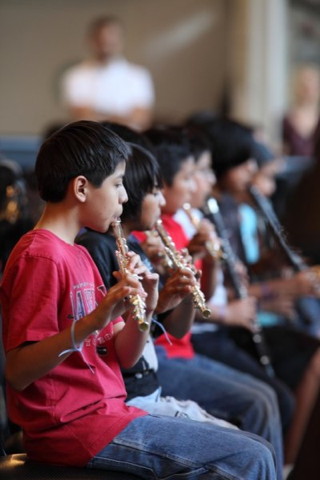 Youth Orchestra LA (Yola) will perform alongside the LA Phil at Walt Disney Concert Hall, for the first time in the Program’s Six-Year History.

For the first time in its six-year history, Youth Orchestra LA (YOLA) students will perform alongside the Los Angeles Philharmonic conducted by Gustavo Dudamel on Sunday, September 29, 2013 at 4 p.m. at Walt Disney Concert Hall. Patrons from throughout the county will also be able to enjoy the concert in a very special LA Phil simulcast on a giant screen in Grand Park.

This special concert celebration will feature a solo performance by LA Phil Creative Chair for Jazz Herbie Hancock, and the Latin GRAMMY-nominated band La Santa Cecilia – who will perform with YOLA conducted by Bruce Kiesling.

Named after the patron saint of music, La Santa Cecilia has been hailed as “Los Angeles’ Best Latin Alternative Band” by LA Weekly.  The Latin GRAMMY-nominated band draws inspiration from all over the world, creating a distinct homegrown sound that exemplifies an exciting hybrid of Latin culture, rock and world music. La Santa Cecilia’s recently released major-label debut Treinta Días has already been selected as one of NPR’s Favorite Albums of the Year ­–with additional critical praise coming from Rolling Stone, The Sunday New York Times and even Elvis Costello- with whom the band has been collaborating. Consisting of accordionist and requintero Jose Carlos, bassist Alex Bendana, percussionist Miguel Ramirez, and captivating lead vocalist La Marisoul, LA Santa Cecilia also just made their national television debut with a primetime performance cameo in the heralded series The Bridge.  With the band having recently performed a two week residency for the LA Phil’s SummerSounds program at the Hollywood Bowl, their appearance at Walt Disney Concert Hall will be another milestone moment in the band’s fast rising career. 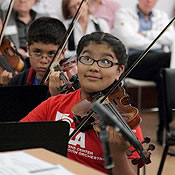 Selections for Orchestra and Ensemble

MOZART Overture to The Marriage of Figaro

Tickets acquired online or via phone have a $1 handling fee.