For a vibrant weekend of music and film, friends of film, music & South African Culture can converge Downtown. This inaugural event of the South African Arts Festival 2013 (SAAF) will showcase some of the country’s beloved musical icons and introduces Angelenos to powerful emerging voices.

The Republic of South Africa’s Department of Arts and Culture will bring its South African Arts Festival 2013 (SAAF), a weekend of South African film and music, to Downtown Los Angeles for the first time, with events on Fri. 10/4, Sat. 10/5 and Sun. 10/6.

The inaugural SAAF 2013 will showcase seven South African films and seven musical artists representing the diversity of the South African experience at FREE public events over the weekend. 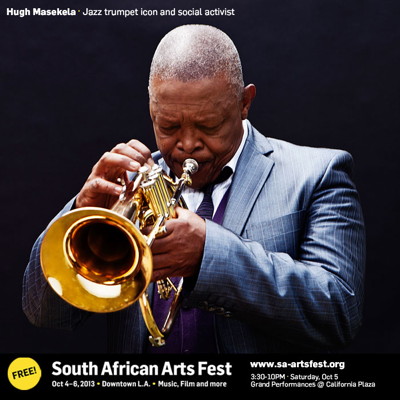 Film Panel Discussions @ Omni Hotel
FREE! Sat. 10/5/13
On Sat. October 5, 2013, the festival will conduct FREE film panel discussions for industry professionals at the Omni Hotel in Downtown Los Angeles from 10am to 5pm.

The conversation points will cover everything from co-production treaties to US filmmakers’ South African experiences and international film incentive comparisons.  This discussion will provide solid information on an industry where global production schedules and distribution are the norm more often than the exception.

Music Panel Discussions @ Omni Hotel
FREE! Sun. 10/6/13
On Sun. October 6, 2013, the festival will conduct FREE music panel discussions for industry professionals at the Omni Hotel from 10am to 4pm.

The competitive musical marketplace will be examined from myriad angles including: licensing and royalties, online media players, live music venues, nuts and bolts information for international artists touring the US.