This weekend ONLY – Beatlemania returns to the Hollywood Bowl! Los Angeles concert report

Nobody was prepared for the pandemonium that erupted when a popular British band first touched down in America in 1964. Of course, we have all seen the images of hysteria that greeted the ‘Fab Four’ upon their arrival.

Believe it or not, it’s been fifty years — a full half century! — since The Beatles played their first iconic show at the Hollywood Bowl, and Beatlemania is still going strong. To mark this anniversary, a recreation of that epic concert is being staged at the Hollywood Bowl this weekend only.

Dave Stewart (one half of the Eurythmics duo) will be the evening’s ringmaster and musical director, and various special guests will join him. The lineup of musicians will feature Vanessa Amorosi, Michelle Branch, Billy Ray Cyrus, Mary Lambert, Martina Mcbride, Allen Stone and Liv Warfield.

As well as performing many Beatles classic pop songs, the ensemble will re-create the historic set, including “Twist and Shout,” “I Want to Hold Your Hand” and “A Hard Day’s Night” all set to vintage film clips and more, all in celebration of the Fab Four’s L.A. Invasion.

Producer/promoter/television personality Bob Eubanks, who brought the Fab Four to the Bowl 50 years ago, will be on hand all three evenings to participate in the concert.

This year’s concert begins with the 1964 set list, which included hits such as “Twist and Shout,” “She Loves You,” “Can’t Buy Me Love,” “I Want to Hold Your Hand,” and “A Hard Day’s Night,” all planned for the first half. The second half of the concert will feature additional Beatles’ classics such as “Blackbird,” “Strawberry Fields,” “Hey Jude,” “All You Need is Love,” and “Eleanor Rigby.” The concert also features vintage clips in celebration of the Fab Four’s L.A. invasion.

For more on the Beatles, the Beatles at the Bowl exhibit can be found on the second floor of the Hollywood Bowl Museum. The Museum is located on Peppertree Lane between the Box Office and Highland Avenue, and is open Tuesday – Saturday 10 am – 8 pm, and Sunday, 4:30 – 7:30 pm. 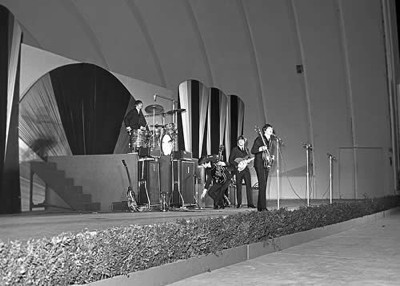 THE BEATLES’ 50TH AT THE BOWL

The August 22 Concert is Sponsored by Cupcake Vineyards,

Official Wine of the Hollywood Bowl

The August 23 Concert is Sponsored by Acura,

The August 24 Concert is Sponsored by Cooper Tires