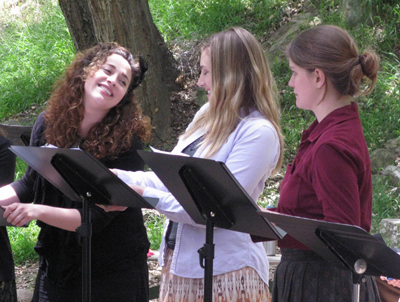 Botanicum Seedlings, Theatricum Botanicum’s Development Series for Playwrights, is gearing up for 2015 and has announced a new submission window for playwrights from Sept. 1 – Dec. 1, 2014.

This will be an annual submission window. Works received during this period will be considered for development and production during the following year.

Opportunities through Botanicum Seedlings include “GreenReads” (for a fresh look at early drafts), playreadings and festivals. Since its inception, the series has been instrumental in the development of over 100 new plays, at least 25 of which have gone on to be published, win awards and receive major productions.

In addition, Botanicum Seedlings is committed to gender parity; the goal is to have 50% or more of the playwrights and directors involved in its public readings be women. Over the past 13 years, 63% of playwrights selected for Seedlings playreadings and 72% of Seedlings directors have been women.

“At Theatricum, Seedlings has become a wonderful way to showcase the work of women,” says Theatricum artistic director Ellen Geer. “But we must also do everything we can to encourage underrepresented artists to come to us, so that we can explore their stories and visions with them. This kind of action is a must for theaters today.”

Botanicum Seedlings was created in 2002 by Theatricum playwright-in-residence Jennie Webb and has established itself as a vital resource for writers across the country. Seedlings is now run by Webb along with Seedlings literary manager Kimberly Shelby-Szyszko.

Playwrights interested in submitting plays for development and production opportunities should visit the official site and refer to the Submission Guidelines. The next submission window is Sept. 1 – Dec. 1, 2014.

Questions, queries and submissions can be sent here.  Playwrights and new play-lovers are also invited to connect to Seedlings on Facebook and Twittter.

For more information on Seedlings and the many other programs which act as an adjunct to Theatricum’s Summer Repertory Season, call the business office at (310) 455-2322 or visit their official site here.