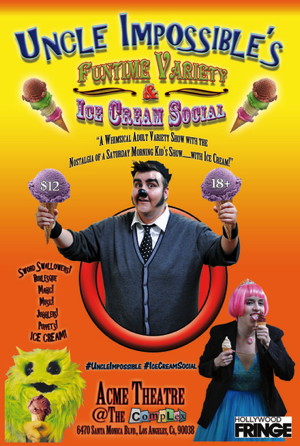 NOTE: Different material and different performers are scheduled for each show. This review is for the Thursday, June 11th performance.

The famous but deceased kiddie show host, Uncle Impossible, has passed down his fortune and legacy to his nephew, Rex, with the condition that Rex must continue his Funtime Variety & Ice Cream Social program. Rex does, of course, but on his own terms, and that’s what this show consists of — an endearingly ramshackle collection of acts consisting of a burlesque, comedy, music, magic and juggling, all taking place at Rex’s own home.

There’s a stripper (Nikita Bitch Project) who peels her way out of a Godzilla costume, and a juggler (Alex Bitrevsky) who does old-school tricks with a hat and a cane. The highlight of the evening is comedian/musician Dr. Princess Lady Scoutington, who jokes and croons her way through two segments — presumably because the scheduled magician was a no-show — but Scoutington is entertaining enough for repeat viewing.

This show really shouldn’t be as funny as it is. The production is bare-bones and the slips are obvious, but the performers embrace the amateur nature and transform it into an asset, getting the audience to root for them even as they flub. Rex’s backstory is a little rushed and perplexing, and his interplay with his sidekick, Princess Be Bop A’Lula, doesn’t really work. But who cares — everyone got ice cream!

Uncle Impossible’s Funtime Variety & Ice Cream Social plays the Hollywood Fringe Festival on June 13, 14, 20, 21 and 25 at the Acme Theatre at the Complex, 6470 Santa Monica Blvd. Tickets can be obtained on the Fringe site.

NOTE: Different material and different performers scheduled for each show. This review is for the Thursday, June 11th performance.

Thursday night’s all-guy edition of the Straitjacket Society’s sketch show played like a frathouse party with all the inherent obnoxiousness implied. They ran through a series of short, unpolished and not particularly funny sketches which were nevertheless greeted with hooting enthusiasm by an audience obviously consisting of friends and family.

There were recurring “Like a good neighbor” sketches that imagined calling forth a State Farm agent to solve some of life’s other problems beyond insurance, but they fell pretty flat, exacerbated by the fact that the lighting operator inserted the blackout during the punchline — rather than at the end — every time.

Another sketch involved a group of Nazis trying to rout out the Jew in their midst, which quickly devolved into a Deutsch-accented screaming match while they all pointed toy guns at one another. A segment that fared slightly better centered around a white guy who unwittingly wears an “HNIC” shirt to a party hosted by an African-American friend without knowing what the initials stand for.

Between sketches, the performers danced around arbitrarily and interacted with select members of he audience, but the overall smugness on display was not supported by the limp material. Straightjacket Society plays a final show at the Hollywood Fringe Festival on June 18 at 7:45 pm at the Acme Theatre at the Complex, 6470 Santa Monica Blvd. Tickets can be obtained on the Fringe site.