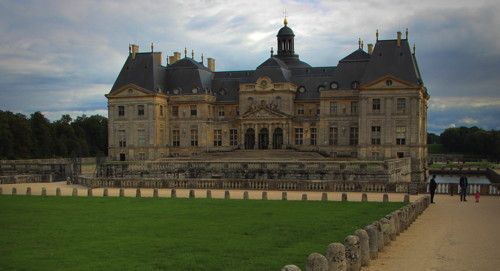 Minister of Finance under Louis XIV, Nicolas Fouquet was not just a lover of money and upward mobility but also a patron of the arts with the eye of a connoisseur. His passion lay with two wives: Louise Forche, who died a year after marrying him (bequeathing him a fortune), and Marie de Castile, Spanish nobility, who came with an extravagant dowry. But his heart was dedicated to the construction of Chateau Vaux Le Vicomte, purchasing the land for it in 1641. To oversee the creation of his Xanadu, he hired three artists at the peak of their powers; architect Louis Le Vau, artist Charles Le Brun and landscape architect, Andre Le Notre. Fouquet gave them each creative freedom to build a chateau that would be the envy of his peers. The grand opening was on August 17, 1661, with a massive party attended by then 23-year-old King Louis XIV.

“Quo non ascendet?” was Fouquet’s motto, “What heights will he not scale?” which refers to the squirrel in his family emblem. Much like the mythical Icarus, Fouquet flew too high. Legend has it that King Louis XIV arrived at the lavish opening celebrations, took one look at the chateau and, inspired by jealously, immediately ordered the arrest of Fouquet. In reality the king had fallen under the spell of Jean-Baptiste Colbert, a scheming underling who maliciously accused Fouquet of enriching himself at the throne’s expense. It was Colbert, in fact, who was attempting to hide his own financial indiscretions.

“On 17 August, at six o’clock in the evening, Fouquet was king of France,” declared Voltaire, recalling the event. “At two o’clock in the morning, he was nothing.” Fouquet was arrested three weeks later by d’Artagnan, captain of the musketeers, and locked up in the Fortress ofPignerol, where he died March 23, 1680.

“The next day after the arrest, the king is going to sack the chateau, take absolutely everything, and take the three same artists, Le Brun, Le Vau and Le Notre to do Versailles,” says Alexandre de Vogue, who resides at Vaux le Vicomte, owned by his father, Patrice de Vogue. “So this became the influence, became very quickly the model that a lot of powerful people in Europe were inspired by.”

Named the king’s architect, Le Vau built Versailles based on Vaux le Vicomte, and Le Brun, who later partnered with Colbert, decorated the palace’s Hall of Mirrors, the salons of Peace and War, and the Staircase of the Ambassadors. Le Notre laid out the gardens on the same axis used at Vaux le Vicomte, a mile and a half line running right through the center of the house, (over 8 miles at Versailles).

The chateau has been in de Vogue’s family since his great grandfather, Alfred Sommier, purchased it in 1875 after it stood abandoned for twenty years. When de Vogue and his brother became overseers in 2012, they decided to undertake the upkeep and restoration of the 100-room chateau themselves.

“Because this is Vaux, and this is such a special place,” he says, explaining why they have taken on such enormous cost maintaining the gardens, the chateau and the art collection it houses. “We break even. So at the end of the year we do an accounting and depending on the success of the season, the number of visitors, we decided to push up or down the level of work we’re going to do at the end of the year and at the beginning of next year. So we just have the money enough to do the work that we can do.”

That mission includes a brand new roof, 40,000 slates completed in 2012 at a cost of 3.5 million euros. While most of the great treasures of Fouquet’s time now sit in places like the Louvre and Versailles, priceless works remain, like a series of seven 17th century tapestries from the Barberini collection. The most recent acquisition was restored at a cost of 10,000 euros.

While de Vogue points proudly to his side of the family, the non-noble side, taking the lead in preserving the chateau and opening it to the public, he is having second thoughts about which section of the public he prefers. Only 34 miles south of Paris, the chateau gets 300,000 visitors per year (80% French). “You’ve got rucksacks, you’ve got kids, and they rub against the doors, the painted shutters… That’s why we’re looking more at the luxury group,” he explains, describing a couple that is renting the chateau for the evening, including dinner, servants, fireworks, 2000 candles in the garden, all at a cost of 38,000 euros – in August it goes up to roughly 90,000.

In the meantime, the statues in the gardens are starting to show the wear and tear of 350 years, with some beginning to lose their features. Dating to the 17th century, they were carved by Michel Anguier, Fouquet’s favorite sculptor. Thanks to donations, they will keep their faces and de Vogue can turn his attention to restoring the central panel on the ceiling of Salon des Muses, painted by Le Brun. “This is my family home and this is a huge privilege and I feel it,” he sighs at the thought of the work ahead. “I’m moved pretty much every day.”