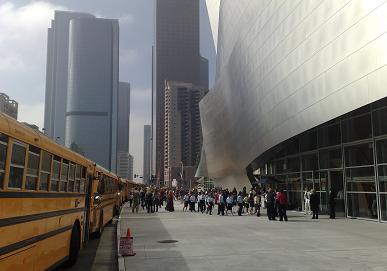 The venues that line this street are set to turn inside out with open rehearsals, architecture tours, museum exhibitions, performances, food and drink, and kids film screenings.

Grab your friends and take a peek behind-the-scenes for the ultimate Los Angeles field trip.

The Broad is a new contemporary art museum built by philanthropists Eli and Edythe Broad on Grand Avenue in downtown Los Angeles.

The Broad is offering free architectural tours of the museum and presenting “Really Eternal Music,” a sound installation by Tim Hecker playing in The Broad’s plaza, as part of GRAND AVE ARTS: ALL ACCESS on October 24, 2015, 10 am – 5 pm.

CTG offers tours of the Ahmanson Theatre and Mark Taper Forum; as well as family crafts based on the play The Sound of Music; fun photo ops with theatrical puppets and masks from Center Theatre Group’s performance of the Quiche Maya creation myth Popol Vuh: Heart of Heaven created in collaboration with the Chicano theatre company El Teatro Campesino as part of GRAND AVE ARTS: ALL ACCESS on Saturday, October 24, 2015, 10 am – 5 pm.

The Colburn School is a performing arts school located in the heart of downtown Los Angeles. More than 2,000 students attend classes in the Colburn School’s four units: Community School of Performing Arts, Music Academy, Dance Academy, and Conservatory of Music.

The Colburn School will offer docent-led tours of its campus and live performances from the next generation of greatness from students of the Colburn Music Academy at 5pm in Thayer Hall as part of GRAND AVE ARTS: ALL ACCESS on Saturday, October 24, 2015.

Grand Park and musiccenterla celebrate the indigenous roots and contemporary development of Día de Los Muertos with more than 75 altars and art pieces illustrating the evolution of this holiday in a compelling installation open to the public as part of GRAND AVE ARTS: ALL-ACCESS on October 24, 2015, 10 am – 5 pm.

The Library Foundation of Los Angeles supports the Los Angeles Public Library, which provides free and easy access to information, ideas, books and technology that enrich, educate and empower every individual in our city’s diverse communities.

The Los Angeles Public Library and Library Foundation of Los Angeles welcome visitors to visit the Central Library exhibit, To Live and Dine in L.A., as part of GRAND AVE ARTS: ALL-ACCESS on October 24, 2015, 10 am – 5 pm.

The Los Angeles Philharmonic, under the vibrant leadership of Music and Artistic Director Gustavo Dudamel, is invested in a tradition of the new, through a commitment to foundational works and adventurous explorations. Walt Disney Concert Hall, the Los Angeles Philharmonic’s home on Grand Avenue, is designed to be one of the most acoustically sophisticated concert halls in the world.

MOCA, devoted exclusively to contemporary arts, features artwork from its noted permanent collection and art-related activities on its lively outdoor plaza as part of GRAND AVE ARTS: ALL-ACCESS on October 24, 2015, 10 am – 5 pm.

The Music Center has stood at the center of LA arts and culture for close to 50 years and is proud to be regarded as one of world’s premier performing arts destinations.

The Music Center has stood at the center of LA arts and culture for close to 50 years and is proud to be regarded as one of the world’s premier performing arts destinations. Join a tour of the Dorothy Chandler Pavilion from 11 am – 1:30 pm; on The Music Center Plaza view large scale Día de los Muertos art installations, as part of a wide-scale project that includes Grand Park (all day) and enjoy performances by Xoyocote Azteca dance company at 12:40 pm and 1:40 pm; and in the Dorothy Chandler Pavilion Lobby, try your hand at special  Día de los Muertos-themed face painting and Papel Picado workshops from 11 am to 2 pm as part of GRAND AVE ARTS: ALL-ACCESS on October 24, 2015, 10 am – 5 pm.  (Please note that information is subject to change).

REDCAT screens awarding films from the REDCAT International Children’s Film Festival, such as “The Little Red Plane”, at GRAND AVE ARTS: ALL ACCESS October 24, 2015, 10 am – 5 pm.