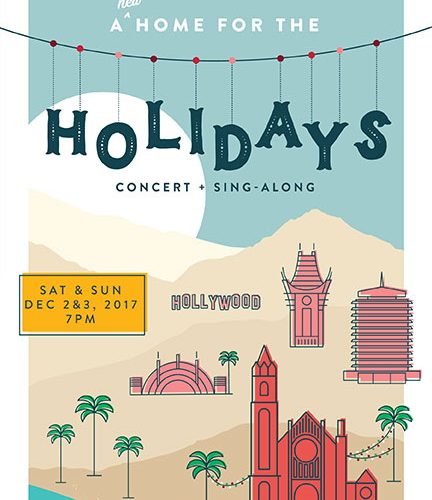 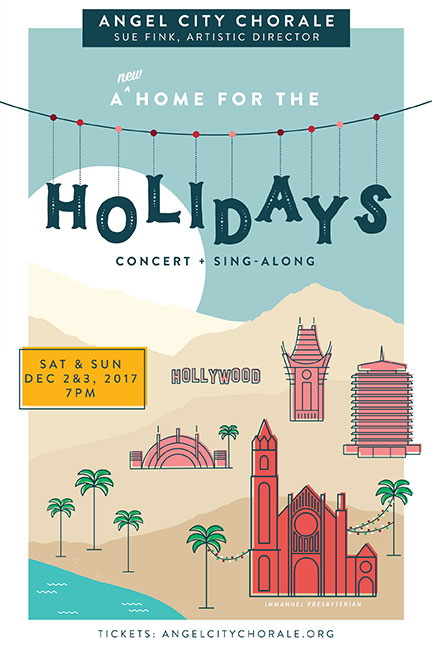 Angel City Chorale (ACC), the globally renowned Los Angeles choir led by Founder-Artistic Director Sue Fink, will present its 24th annual holiday concert event and sing-along, A NEW Home for the Holidays, during the first weekend in December. With its engaging combination of traditional holiday favorites wrapped in fresh, stylish arrangements, A NEW Home for the Holidays will display ACC’s musical dexterity while allowing audiences to marvel at the joy, optimism, and diversity of the choir’s singers and soloists. The production’s festive energy will only be magnified by ACC’s move to a brand new venue (hence A NEW Home for the Holidays), with the show set to take place at the Immanuel Presbyterian Church in Los Angeles’ Koreatown over two special evenings on Saturday, December 2, and Sunday, December 3, 2017. Tickets range in price from $22 for children to $75 for VIP packages (see “Ticketing & Venue Details” towards the bottom of this press release). The performances will each start at 7:00pm. For additional information on ACC and A NEW Home for the Holidays, please visit https://angelcitychorale.org/concerts-events/a-new-home.

A NEW Home for the Holidays –

A NEW Home for the Holidays is an original, never-before-seen production that channels the warmth of a traditional holiday concert and sing-along with a modern twist. The program is a blend of seasonal compositions with selections from fully-orchestrated holiday classics to contemporary pop, R&B, and a cappella interpretations. ACC’s 160+ member choir accompanied by a full orchestra will rejoice in the diversity of Los Angeles and the world to promote a sense of hope, optimism, and peace to all audiences this season.

The concert, which combines traditional arrangements from classical masters like Joseph Haydn with present-day favorites from Norwegian songwriter Ola Gjello and Grammy Award-winning composer Eric Whitacre, will foster a familiar yet sophisticated vibe that speaks to ACC’s ability to reinvent and reimagine the power of choral performance. Stunning new interpretations of familiar carols like “Bring a Torch” and “O Holy Night” will be performed alongside an a capella number from acclaimed vocal group Committed – winners of NBC’s musical competition The Sing Off in 2010. Angel City’s innovative mixture of musical styles and forms – a reflection of the diversity of the choir itself – will be on full display in A NEW Home for the Holidays, embracing old and new seasonal traditions that are sure to resonate with attendees of any age, background, culture, or religion.

A NEW Home for the Holidays will also feature the world premiere of “Hanukkah Lullaby,” an original piece by ACC Founder-Artistic Director Sue Fink and ACC choir member and songwriter Denny Wynbrandt. “We want our children to never have to suffer, and in times of great challenges like war, illness, political unrest, or financial difficulties, joy and celebration at the holidays can seem a distant dream,” explains Fink about the new piece. “‘Hanukkah Lullaby’ attempts to answer a question with which we can all relate: How can you help your children and family remain resilient during difficult times?”

A NEW Home for the Holidays will also see the return of the groundbreaking mobile application YourchestraApp, created by ACC’s own long-standing member Andrew Cheeseman. The app, which debuted in June during ACC’s annual spring production, allows phones to ‘connect’ live during the concert.

A NEW Home for the Holidays

Angel City Chorale will celebrate 25 years of groundbreaking choral performance next year with two special concert events. ACC’s birthday festivities will kick off in June 2018 during its annual spring concert entitled One World: Many Voices II, which will feature a diverse selection of music including new commissioned works from composer Christopher Tin and more. Anniversary celebrations will then continue into ACC’s 2018 holiday concert and sing-alongs the first Saturday and Sunday in December with Silver and Gold, a “best of” show featuring works from Angel City’s past holiday concerts. Stay tuned for more information on ACC’s 25th anniversary concerts.

Angel City Chorale is thrilled to announce that it has been invited to perform on stage with the New York City Gay Men’s Chorus at New York University on Saturday, May 19, 2018 at 7:30pm in Manhattan, NYC. The New York City Gay Men’s Chorus, which has been active for over three decades and now contains more than 260 members, is world-renowned as one of the foremost American choral groups and a pioneering voice of the LGBTQ community.

Angel City Chorale is delighted to share that its partnership with the Amy Foundation in South Africa will expand in exciting new ways in 2018. The Amy Foundation, originally known as the Amy Biehl Foundation, provides a safe environment in the challenged township communities of Cape Town, emphasizing the creative and academic development of emotionally well-rounded children and teens. Back in 2011, ACC had the honor and privilege of traveling to Cape Town to perform several benefit concerts for (and with!) Amy Foundation youth, and ACC is excited to return the favor in 2018. In honor of ACC’s 25th anniversary, twenty Amy Foundation children will travel from Cape Town to Los Angeles to perform with ACC during its spring production, One World: Many Voices II. In an effort to demonstrate the group’s mission of “Building Community, One Song at a Time,” ACC will also provide Amy Foundation youth with a rich cultural experience of Southern California in collaboration with the Boys and Girls Club of Los Angeles. ACC will be initiating a fundraising drive for the Amy Foundation reunion, with more information to come on the ACC website.

As founder, artistic director, and conductor, Sue Fink brings a dynamic energy to Angel City Chorale that distinguishes it from other choral groups. She has worked with many acclaimed composers including Morten Lauridsen and Christopher Tin. In 2016, she conducted the Royal Philharmonic Orchestra in London and the Mowbray Orchestra at the Harrogate International Festival in York, and recorded at famed Abbey Road Studios. Fink has also conducted in Ireland, South Africa, and many distinguished venues in the U.S. including the Walt Disney Concert Hall in Los Angeles.

Fink attended UCLA, and also studied conducting and toured with internationally renowned musician-choral director Roger Wagner. She established the Oriana Renaissance Ensemble and the Los Angeles Women’s Community Chorus, serving as conductor for both groups prior to founding Angel City Chorale. As a singer-songwriter she has toured extensively, recorded albums, and won international songwriting contests. She maintains a private voice studio in Los Angeles, composes and arranges for choral groups, and writes songs for television and film. As a respected vocal coach, Fink has worked with well-known recording artists including Brian Wilson, Luther Vandross, Stevie Wonder, Weezer, the Foo Fighters, and more. She has released two full-length solo albums and four with ACC.

Angel City Chorale (ACC), conducted by Founder-Artistic Director Sue Fink, is a multitalented, multicultural group of men and women that truly reflects the spirit of Los Angeles, the city it calls home. Formed by Fink in 1993 at the world-famous McCabe’s Guitar Shop with just 18 singers, ACC has since grown into a 160+ member choir with a worldwide audience. The choir offers a diverse selection of musical material including classical, jazz, folk, gospel, urban, rhythm & blues, and more. ACC performs two concerts seasonally, in spring and winter every year, to standing-room only crowds.

ACC has performed over the years at a variety of internationally respected venues, from Walt Disney Concert Hall in Los Angeles to Carnegie Hall in New York; appeared on national television; sung with the Los Angeles Philharmonic, conducted by Gustavo Dudamel; and worked with artists including Stevie Wonder, Mary Chapin Carpenter, Luther Vandross, Chester Beddington, Dave Navarro, and Natasha Bedingfield. ACC has recorded four highly acclaimed albums, which are available on CD through various online retailers found here. Angel City Chorale strives to give back to the Los Angeles community through the gift of song, donations, and volunteerism. Each year in December, around 100 members of the choir participate in the organization’s Tour of Hope, where the singers take their holiday program on the road for one full day of joy, performing concerts for the homeless, the elderly, and others who could genuinely benefit from an infusion of holiday spirit.

ACC is proudly independent and is not affiliated with any particular religion, school, or guiding organization. ACC’s principal accompanists are Mark McCormick and Gordon Glor.

General admission tickets for Angel City Chorale’s uplifting winter concerts and sing-alongs are $35 in advance and $40 at the door. Children’s tickets (ages 5-12) are $27 and seniors are $32 (both in advance and at the door). Preferred front-of-house seating may be reserved online for $50 in advance and $55 at the door; children’s preferred tickets are $42/$47; and seniors’ preferred seats are $47/$52. VIP tickets (all categories) for first tier seating are $75. Advance tickets are available via the ACC website or by calling 310-943-9231. Online ticket sales close at 10:00pm on the day prior to each show. Same day tickets may be purchased at the door. Immanuel Presbyterian Church is located at 3300 Wilshire Blvd., Los Angeles, CA 90010 (between South Vermont Ave. and Normandie Ave.; map). Event parking will be available across the street for the low price of $5. Early arrival is strongly encouraged.

• A NEW Home for the Holidays tickets – https://angelcitychorale.org/concerts-events/a-new-home