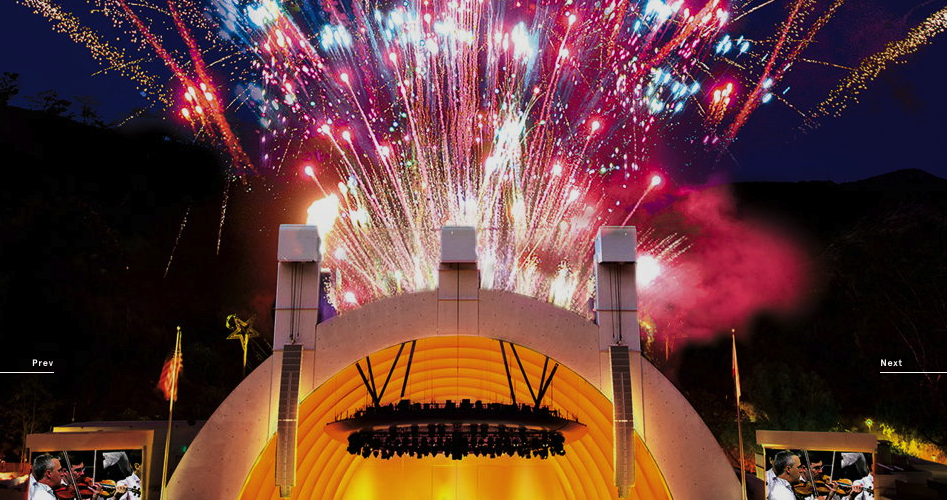 Happening this Saturday is one of several FREE concerts for frontline and essential workers (invited guests only) as The Los Angeles Philharmonic Association celebrates its historic return to the Bowl.

The rest of us eagerly anticipate the triumphant resumption of their summer season at the Hollywood Bowl, following last year’s cancellation of its summer program.

Adhering to the latest public health and reopening guidelines issued by Los Angeles County, the LA Phil will offer more than 50 performances, including 14 concerts with Music & Artistic Director Gustavo Dudamel. From classical music to pop, reggae, jazz and film, the season showcases acclaimed artists and the return of numerous Bowl favorites.

“With the return of in-person performances to the Hollywood Bowl, we are seeing both the return of a beloved summer tradition and the reunion of a community built by sharing in live musical experiences with one another. From the artists on stage to the hundreds of returning seasonal employees, we can’t wait to welcome audiences back to the Bowl and begin the kind of healing and celebration that music can provide. With the support of Kaiser Permanente, we are fortunate to open our season with free concerts for the frontline and essential workers whose heroism brought us all through the darkest days of the pandemic and continue with an incredible line-up that features a little something for everyone.”

Los Angeles Philharmonic Music & Artistic Director Gustavo Dudamel said, “Music-making is ultimately about the shared experience of people coming together and being united in a communion of sound. For musicians, there is no greater joy than feeling our instruments resonate in harmony with those around, and that is why this return to in-person performances at the Hollywood Bowl is such a powerfully important moment. After the many challenges of this past year, we all feel a profound sense of joy and gratitude to be able to once again share music with you, and especially to be able to offer these opening concerts to our heroes on the front lines, who have given their all to keep us safe this past year.”

To kick off the Hollywood Bowl reopening in advance of the concerts accessible to the public, the LA Phil is hosting five free concerts for healthcare workers, first responders and essential workers in appreciation for all they have done for Los Angeles throughout the pandemic. Three of the first free concerts at the Hollywood Bowl are made possible through a partnership with Kaiser Permanente. They will include two performances by Gustavo Dudamel and the LA Phil (May 15 & 22) playing repertoire from Tchaikovsky to Montgomery, and the Grammy-winning L.A.-based band La Santa Cecilia (June 26), known for its sound infusing contemporary cumbia with bossa nova, jazz and pop. The May 15 and June 26 concerts will also be livestreamed on Facebook and YouTube. In collaboration with Amazon Prime Video, the upcoming Amazon Original movie P!nk: All I Know So Far (May 17) will be screened live in advance of its worldwide release on Prime Video, including a special appearance and introduction of the movie from P!nk herself.

The fifth free concert will be with L.A. artists Thundercat and Flying Lotus (June 12) in their first performance since Thundercat won a Grammy for Best Progressive R&B Album earlier this year. The concert is generously sponsored by Gregory Annenberg Weingarten, GRoW @ Annenberg.

The Hollywood Bowl will reopen to the public with a perennial favorite, the July 4th Fireworks Spectacular, this year featuring Kool & the Gang and the Hollywood Bowl Orchestra led by Principal Conductor Thomas Wilkins (July 3, 4). The month of August will feature the beloved Sing-A-Long Sound of Music with host Melissa Peterman (August 21), and the Tchaikovsky Spectacular with fireworks returns (August 6, 7).

The broad range of performances will encompass everything from a one-night-only return performance by Yo-Yo Ma with Bach’s Six Suites for solo cello (September 14) to Viola Davis (July 15) and Christina Aguilera (July 16, 17) and H.E.R. (August 13, 14) making their LA Phil debuts with Gustavo Dudamel. Actress, singer and songwriter Cynthia Erivo makes her LA Phil debut with Thomas Wilkins (July 30). The music of film will be explored with the Maestro of the Movies John Williams (Sept 3–5 conducted by both Williams and David Newman), and the summer tradition of watching movies under the stars with live orchestral accompaniment will continue with the world premiere of an orchestral arrangement of Mark Knopfler’s score for The Princess Bride (LA Phil, conducted by David Newman, July 31), Black Panther, the first Marvel movie to be screened with live orchestral accompaniment (LA Phil, September 10–12) and Harry Potter and the Half-Blood Prince™ in Concert (Hollywood Bowl Orchestra, conducted by Justin Freer, September 17).

Gustavo Dudamel and the LA Phil

The 2021 season will also include the debut of Dudamel’s Pan-American Music Initiative, a multi-year undertaking celebrating the creativity of the Americas announced in 2020 and delayed by the pandemic. As part of this initiative, Dudamel leads a Latin music celebration at the Bowl with the world premiere of Arturo Márquez’s Violin Concerto Fandango, written for Anne Akiko Meyers (August 24), a program celebrating the centennial of Astor Piazzolla (August 26) and Carlos Vives joining Gustavo and the LA Phil (August 27, 28).

Jazz Plus
The Jazz Plus series returns with Ledisi singing the music of Nina Simone accompanied by the LA Phil and conducted by Thomas Wilkins (July 24), a night featuring Dave Koz and Tower of Power (August 8), and Blame it on Rio! with Sergio Mendes featuring Carnival dancers (August 15). Herbie Hancock, the LA Phil’s Creative Chair for Jazz, will close out the series on September 26.

Following the health guidelines set forth by the County of Los Angeles, the LA Phil’s Hollywood Bowl 2021 season (July 3–September 28) will be a majority vaccinated venue, with two sections reserved for non-vaccinated audience members with proof of a negative COVID-19 test prior to attendance. Mask wearing will be required for all attendees. The Hollywood Bowl will continue to receive public health guidelines from Los Angeles County and as policies evolve over the summer, more information can be found here.

Subscribers can renew their seats online at HollywoodBowl.com or via phone at 323 850 2000 starting on May 11 (new subscriptions will not be available). “Create Your Own” 3-concert packages will be available on May 27. Tickets for July 3 & 4 will be available to purchase on May 18.  Individual concerts will go on sale to the general public on June 1. All tickets will be delivered digitally. Further ticketing information is available here.

The culinary program at the Hollywood Bowl is curated by the celebrated local chef and restaurateur team of Suzanne Goin and Caroline Styne. The James Beard award-winning duo, along with on-site Executive Chef Jeff Rodgers, will be providing food and wine for purchase from the on-site marketplaces, Street Food Stands (available in person and via mobile ordering), as well as pre-ordered picnic boxes and pre-ordered Supper in Your Seats for box seat holders. Ann’s Wine Bar (by A.O.C.) will also be available for in-person dining with an expanded outdoor dining area. Reservations for the wine bar are available through Open Table.

All of the Bowl’s dining options have been updated to ensure the safety of all guests and staff. All team members are health screened before starting work and are outfitted with personal protective equipment. All sanitation measures have been amplified, and social distancing is required and enforced.  All entrances to indoor facilities such as the marketplaces will be monitored to allow for a safe experience.

About the LA Phil

Under the leadership of Music & Artistic Director Gustavo Dudamel, the LA Phil offers live performances, media initiatives and learning programs that inspire and strengthen communities in Los Angeles and beyond. The Los Angeles Philharmonic orchestra is the foundation of the LA Phil’s offerings, which also include a multi-genre, multidisciplinary presenting program and such youth development programs as YOLA (Youth Orchestra Los Angeles). Performances are offered on three historic stages—Walt Disney Concert Hall, the Hollywood Bowl, and The Ford—as well as through a variety of media platforms. In all its endeavors, the LA Phil seeks to enrich the lives of individuals and communities through musical, artistic and learning experiences that resonate in our world today.

About the Hollywood Bowl

One of the largest natural amphitheaters in the world, with a seating capacity of nearly 18,000, the Hollywood Bowl has been the summer home of the Los Angeles Philharmonic since its official opening in 1922 and plays host to the finest artists from all genres of music, offering something for everyone. It remains one of the best deals anywhere in Los Angeles; to this day, $1 buys a seat at the top of the Bowl for many classical and jazz performances. In February 2020, the Hollywood Bowl was awarded Outdoor Concert Venue of the Year at the 31st Annual Pollstar Awards, an honor bestowed 14 previous times. It was also awarded the Top Amphitheater prize at the 2017 and 2018 Billboard Touring Awards. For millions of music lovers across Southern California, the Hollywood Bowl is synonymous with summer. hollywoodbowl.com