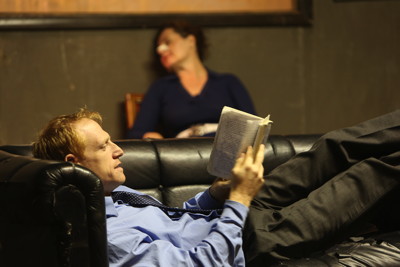 It’s engrossing, subtle and riveting. A theatrical performance that consists of the reading and acting out of an entire novel over the course of a single day, Gatz, by New York City’s experimental theater ensemble Elevator Repair Service (ERS) is a unique and rewarding experience – both literary and theatrical.

The novel is F. Scott Fitzgerald’s jazz-age classic The Great Gatsby and the show is staged as a marathon event. Dedicated LA audiences see the ‘curtain’ rise at 2pm and fall at 10pm (1pm till 9pm on Sundays). It’s a lot to demand from both audiences and the acting company, and yet it works.

The play begins when an office worker starts for the day, distinctive NY takeout coffee cup in hand. The office is shabby, with old equipment. When his ancient computer fails to boot up, he spots a copy of Fitzgerald’s novel The Great Gatsby in a cubby on his desk and begins to read it aloud.

With every line of the novel “read” aloud and performed, Gatz truly is a marathon event. The whole day and night’s performance is broken up by two intermissions and a dinner break.  It’s challenging for all concerned, yet Gatz is the company’s most successful production in its 21-year history.

The cast do keep the show entertaining throughout its endurance test. I was surprised when the action tipped into broad comedy during the first part, but their playful and less-rigorously-serious-than-usual interpretation is well supported by the storyline.

The play’s final quarter — the last hour and a half — however, does prove somber and emotional.

The company’s founding member and artistic director John Collins directs Gatz, which stars the ensemble alongside Scott Shepherd as ‘The Narrator’ Nick, in a breathtaking performance.

Go here to read my interview with John Collins and Scott Shepherd.