Ridley Scott on the making of Robin Hood 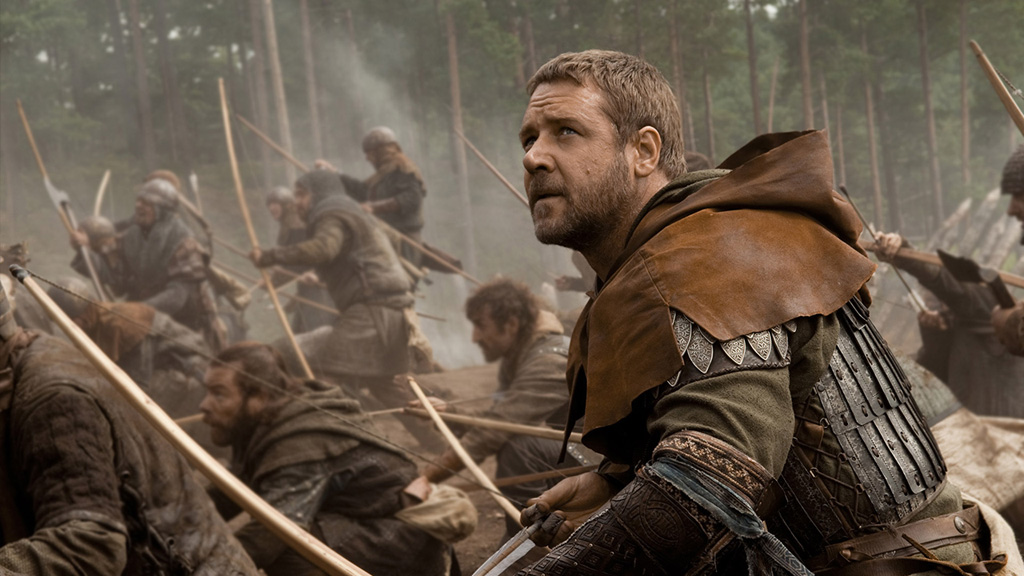 Director Ridley Scott’s latest filmic collaboration with leading man Russell Crowe (their fifth) is Robin Hood, an adventure and skirmish-packed tale of one of history’s most beloved anti-heroes, featuring plenty of Gladiator-style battle scenes, horseplay, archery and sword fighting for Crowe’s Hood and his merry men.

Scott’s reported $130 million flick is from a story and screenplay by Brian Hegeland, with story collaboration from writing partners Ethan Reiff and Cyrus Voris. The costume drama promises to present a definitive and historically accurate rendition of how a bowman in the armed service of King Richard the Lionheart came to be known as Robin Hood, the famous archer and outlaw of English Folklore.

[Note: this interview was conducted well before the film’s release]
From what we have been shown so far, the story takes an “origins” approach, beginning with Robin battling his way back from the Crusades through France, including laying siege to a castle in Northern France (the siege of Chalus Chabrol, circa 1199) under the leadership of a somewhat mad and disillusioned Richard “Coeur de Lion” (Danny Huston). Robin is essentially an archer and mercenary, as are the other crusaders. Rather than being driven by religious convictions, all who have enlisted in the Crusades are under paid service to the King.

Early on in the movie, some backstory is established of a scheme to invade England as devised by a corrupt and treasonous English Lord, Sir Godfrey (Mark Strong), in collusion with the King of France. The dastardly plan is to assassinate King Richard and then undermine the heir-apparent, the weaker royal John, by turning his own feudal Lords against him.

It is during this historic siege of France that we see that Crowe – known as Robin Longshank at this stage – is allied with two fellows who we later learn are Little John (Kevin Durand) and Will Scarlett (Scott Grimes). During the course of this battle, and Robin’s return journey back to England, we cut back to scenes that introduce Maid Marian (Cate Blanchett), her father (Max Von Sydow) and also King John (Oscar Isaac).

Robin and his mates return to Nottingham via London and Robin assumes the identity of Robert of Loxley, a slain lord from the French battle whose sword Robin has hung onto, at the behest of Marian’s elderly Father. This ruse figures in Robin’s later attempts to protect Nottingham and defend England against France.

The film began development in 2007 when Universal Pictures acquired a script entitled Nottingham, depicting a heroic Sheriff of Nottingham to be played by Crowe. Scott’s dissatisfaction with that script led him to delay filming. During 2008 the screenplay was rewritten into a story where Robin Hood emerged as an outlaw, with the character of his classic nemesis, the Sheriff (Matthew Macfadyen), reduced to a lesser part of the story. Additionally, Scott dropped the temporal notion of Crowe playing both roles and then Nottingham was re-titled to reflect a more traditional and accessible approach.

Explains Scott, “It’s a good start. That’s why the idiot title of Nottingham was initially crazy. You may as well call it Robin Hood. I remember thinking, “˜You’re going to call it Nottingham? That’s insane.” They’d have to spend all their marketing explaining what Nottingham is when you’ve already got a title that’s known in virtually every territory in the world called Robin Hood. And marketing something – anything – like Nottingham instead of Robin Hood, what’s that about? With a known title, you’re halfway there.”

Seeing as there is an abundance of colorful versions of the tales of Robin Hood on television and the big screen, you have to wonder about Scott’s take on what has come before his cinematic attempt. Scott chuckles at the notion that he is trying to set the record straight on this famous outlaw. “Well, I don’t really get the green tights. I like Mel Brooks’ one,” he adds, alluding to 1993’s comedic Robin Hood: Men In Tights. “But I thought Ivanhoe was probably the best of all Robin Hoods.”

Yet why would anyone want to tell this story once again? Is it because the general public perhaps doesn’t realize the extent to which the legend of Robin Hood was vaunted in literature, songs and poems from the British tradition? Affirms Scott, “Culture, yes. I spend a certain amount of time in France and I was talking to the French kids. I said, “˜Do you know who Robin Hood was?” They go, “Oui.” So, what did he do? And they said, “˜Well he – didn’t he take from the rich and give to the poor?” Very good. They know. I think Robin Hood is global, don’t you?” Scott goes on to expound, “Robin Hood is myth or legend or hero or outlaw. Whatever he was – Robin Hood was, I think, definitely a Dudley Do Right just by definition of the period and the idea of chivalry. There was definitely a test toward chivalry in that notion of Robin Hood, for sure. He was fundamentally fair.”

Further cementing his historical approach for his semi-epic, with this story Scott and the screenwriters have taken the risk of shifting the emphasis and expected focus. Rather than the Robin-versus-Sheriff showdowns we’ve come to expect from the exploits of Robin Hood, instead Scott has employed the history of the era to personify a rival nation as the villain.

Explains Scott, “It is from France – the French,” he insists. “The villain is much bigger in that sense; more important and much more dangerous.”

Scott goes on to passionately state his case. “This Nottingham, this Robin Hood is a fresh look because it’s real. I like everything to be real. In Gladiator Maximus was made up but I shoehorned that character into a very real sculpture and a very real story. Richard ‘Coeur de Lion’ was the glorious rock and roll, 6’4″ King of England who couldn’t speak English. He only spent six weeks in the UK and loved guys and didn’t like women. But he was glorious because he was always first ‘unto the breach’. He was completely gay, but that was quite common in the time and it was even thought that Philippe of France and he had a relationship.”

Okay, that’s the history. So what’s the story Scott wants to tell with his movie? Scott replies, “I just want a good, accurate portrayal of Robin Hood because I think he actually existed. He occurs too many times and is mentioned so often in literature not to be just fiction or legend. So that means that at some point in history, there was a person who they used to refer to as the green man in all those English pubs. Seriously, that’s Robin Hood. Robin of Locksley. Robin of the Hood – there are many names that occur over about three centuries.”

Scott has worked with big Russ so many times previously, so what is it about this guy? Scott seems somewhat baffled by this fairly predictable question. “I don’t know. I think we tolerate each other now. I think that’s what it is. I mean, we’re very similar, in a way, in the sense of being straightforward. I like Aussies; they’re very straightforward. And because I’m Northern, I’m still like that. I think I trust people that think. I’m not grumpy at all and people say Russell is grumpy. He’s not grumpy at all.”

“No. If you ask him a stupid question, you’re going to get a horrible broadside, or he’s just going to stand up and leave. So, if you go and do an interview, then you better be prepped to ask good questions and don’t ask anything personal. That’s all,” Scott asserts.

With the screenplay’s take on Maid Marian, especially with forceful and chilly Cate Blanchett cast in the role, it seems as if we have a bit of a Joan of Arc meets Shakespeare’s The Taming of the Shrew storyline.”

Scott concurs, “Yeah, a little bit. That’s right. She is not a fair maiden. She doesn’t like being a fair maiden, because Cate can give as good as she gets and that’s what she’s best at. And also, she’s very humorous which a lot of people aren’t really aware of. She’s really almost comical. If she wants to be a comic, she’ll be comical. And I love to see that her relaxing to that process of being able to play that comedy – Taming of the Shrew is comedy. It’s a battle of wits and it adds reluctance to the forced union.”

Although this movie takes a stab at historical authenticity, Scott nonetheless makes room for a hard-on joke, as when Marian’s father, played by Max Von Sydow, comments to Robin, “I awoke this morning with a tumescent glow.”

Scott chuckles to himself, saying “Oh, yeah, yeah, yeah, yeah”¦ That was charming, wasn’t it? It”™s because the son has returned, so it has reinvigorated him. Didn’t you get that?”

Yeah, I got that.

“Shit, okay. I thought he did it quite well, actually.”